Islam in Russia: Caught between acceptance and rejection | Europe | News and current affairs from around the continent | DW | 22.09.2015

Islam in Russia: Caught between acceptance and rejection

Russia's largest mosque is opening its doors in Moscow. New Muslim houses of worship, however, are very controversial in Russia. More than anything, many Russians fear more immigrants. 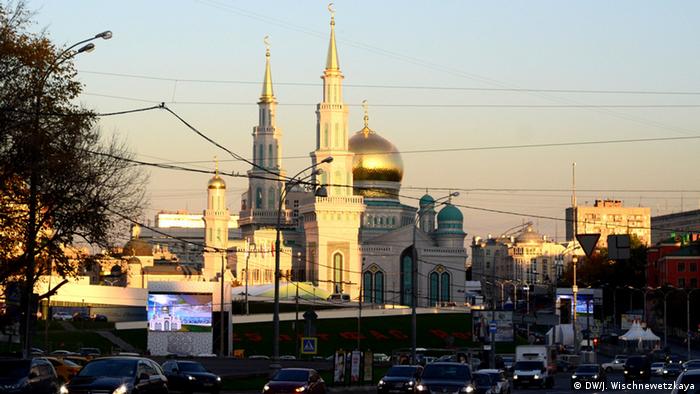 After ten years of construction, Moscow's main mosque will finally open its doors to the faithful this Wednesday. It is big enough to hold up to 10,000 worshippers, and according to the chair of the Russian Council of Muftis, Ravil Gaynutdin, that makes it the largest Muslim house of worship in the whole of Europe. The mosque that originally occupied the site was built in 1904, but it was torn down in May 2005 to make way for the new building.

Russians tend to clearly differentiate between Islam as a religion and Muslims as individuals, says Alexander Verkhovsky, director of the SOVA Center, a Moscow-based NGO. He adds that 40 percent of Russians say they have a negative opinion of Islam, yet only 12 percent claim that they have a negative opinion of individual Muslims. Verkhovsky told DW that many Russians perceive Islam as "a kind of ideology, as something dangerous that is connected to terrorism."

He explains that Russians are generally not very tolerant of certain ethnic groups - above all those hailing from the Caucasus - but that religion has little to do with that fact. "People are against the construction of new mosques because they fear that new immigrants will move into their neighborhoods. They are less scared about the buildings than about the influx of foreigners." This often leads to naked aggression. Russia has a history of ethnically motivated attacks, though very few are motivated by religion. 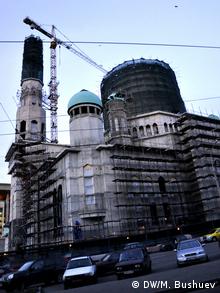 The new mosque under construction in Moscow

Nonetheless, he says the Russian government is looking at Islamic religious communities through the prism of the war on terror: "From the authorities' point of view, informal Islamic groups are a risk. Peaceful people may be associated with such groups, but also extremists with ties to armed underground organizations." Verkhovsky is critical of the fact that peaceful groups have been prohibited in Russia alongside groups that actually have extremist structures.

Islamophobia definitely exists in Russia, says renowned orientalist Alexey Malashenko of the Carnegie Center in Moscow. "It is fueled by conflicts in the Caucasus, but also by internal and external immigration, as well as extremism." In his opinion, the only tolerance that really exists is that regarding religious attire: "Nobody cares whether or not someone wears a headscarf."

People view the question of the building of mosques in Russian cities in very different ways. "A few years ago, a new mosque was built near my house, I never heard anything about conflict there," says Malashenko. He adds that the chairman of the Council of Muftis is of the opinion that there should be a mosque in every neighborhood in Moscow. "And he's right, because Moscow is the largest Muslim city in Europe," he says.

"But as soon as it was determined that the number of mosques in the city should in fact be increased, people started speaking out against the plan, because they were scared of immigration," according to the orientalist. "But immigrants are just people, they have to pray somewhere too! Otherwise they will be forced to go to more dubious houses of worship, and those are often hotbeds of extremism."

The complexity of daily life

The chairman of the Society for Central Asian Political Immigrants, Bakhrom Khamraev, is convinced that the Russian government is waging a real war against Islam - primarily against independent Islamic organizations and associations. "The situation is extremely difficult. There are repressions and trumped-up criminal proceedings, even against Tatars and Bashkirs," says Khamraev.

"It is very difficult to be a Muslim in Russia today. There have been many cases of authorities attempting to prohibit the wearing of the hijab or the possession of religious literature on grounds of extremism," complains the activist. People often have no idea that the literature they have in their house may be considered extreme. Yet, even Khamraev says: "In daily life, Muslims are generally well treated."

At least 2,000 Central Asians are believed to have joined "Islamic State," a new report found. Marked by poverty and radicalization, the region has become a growing source of foreign fighters, as Deirdre Tynan tells DW. (21.01.2015)

There have been an increasing number of abductions in Crimea. It is usually Tatars who disappear in unexplained circumstances. Relatives of the victims have made serious allegations against the Russian police. (11.12.2014)

Russians have deep-rooted anxieties when it comes to Wahabis. The country’s media claim that there are hundreds of thousand of radical Islamists in Russia. But are they all Wahabis? (02.01.2014)