Ireland′s young professionals look to flee | Europe | News and current affairs from around the continent | DW | 26.11.2010

As Ireland's austerity measures bite, many of the country's young businesspeople are considering leaving the country. In fact, many have already left, looking for better prospects overseas. 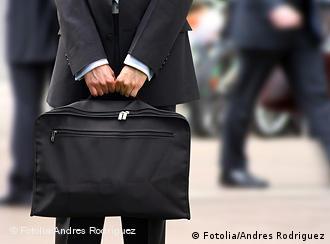 At a 'Show Your Business Week' fair in the center of Dublin, Irish entrepreneurs have been showcasing their products and services, hoping to give their businesses a boost. Right in the middle of town, the exhibition gave these firms a prime spot to advertise. But that won't be enough to change their fortunes as trading conditions in Ireland have become incredibly difficult.

Jimmy O'Reilly is one of them. He has had to cut his workforce of laborers from eight to two at the small building firm he runs.

He has considered moving his business abroad. But for now, he's staying.

"Unfortunately we have two kids here, and I'm a bit loyal to Ireland," he said. "I think we'll stick with it and make an effort to keep it afloat." 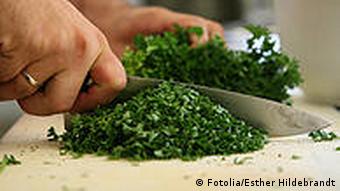 In the food industry, you move where the work is

It's easy for people to move their businesses within the European Union, says Neil Barrett, who owns a food start-up. "It's a common market, so it's as close to London as it is to Cork, so you'll move wherever it works. Because you have to."

Just how many people will up and leave Ireland for better prospects elsewhere is impossible to say, but James Wickham, a migration expert at Trinity College Dublin, says almost everyone is talking about it.

"It's an absolutely standard thing for us in education to say, 'well all my students are talking about leaving.' How many people have actually left is not clear, although it's unambiguous that the number is rising. There is a sort of general atmosphere of 'oh my God, I'm getting out.' "

Those statistics that are available suggest the numbers are already high. According to the Economic and Social Research Institute, Irish emigration jumped by 40 percent to 65,000 in the year to April 2010. It predicts 200,000 people will emigrate by 2015.

The economic downturn in Ireland is particularly worrying for students who wonder whether they will find jobs once they've finished their studies. Ireland's Union of Students predicts 150,000 young people will choose to leave the country to find work in the next five years. 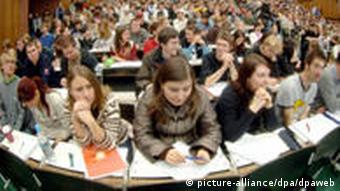 Students are expected to leave Ireland in droves

Professor Wickham says emigrating is not seen as a big deal by young Irish people. "This has happened before. In the 1980s I can remember saying to my students 'last one out, turn out the light.' "

He pointed out that Ireland, like Poland, has for a long time been a country where "young people don't think twice - or they think twice but not three times - before they emigrate."

"We are a society where it is normal to leave. If you talk to young Germans in the middle of a recession - they don't leave," he said.

But Wickham put a positive spin on the possibility of thousands of skilled workers leaving the country.

"One of the things we've learnt from the last mass emigration is that people come back, and people travel backwards and forwards," he said. "The gains from emigration - from people coming back, from people setting up new concepts from business contacts, intellectual contacts, cultural contacts, professional contacts - you know those are real benefits."

The European Union says its confident about Ireland's proposed austerity measures. Yet financial markets remain nervous, fearing that Spain and Portugal may be next in line for EU aid. (25.11.2010)

The building boom, when economic times were good in Ireland, has led to a huge oversupply of homes across the country. So-called "ghost estates" now blight the republic, with many homes left unoccupied or unfinished. (25.11.2010)

Irish Prime Minister Brian Cowen has announced early elections, as he faces discord from allies and enemies over his handling of the economy. On Sunday, Ireland requested financial aid from the EU and IMF. (23.11.2010)