The European Union says its confident about Ireland's proposed austerity measures. Yet financial markets remain nervous, fearing that Spain and Portugal may be next in line for EU aid. 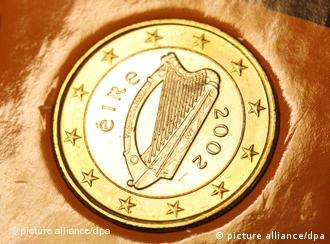 EU Commissioner for Economic and Monetary Affairs Olli Rehn has applauded Ireland's 15-billion-euro ($20 billion) austerity package as "a sound basis for the negotiations" on an international bailout.

Ireland has set out a four-year plan to save the 15 billion euros in order to secure an international bailout expected to be in the region of 85 billion euros. 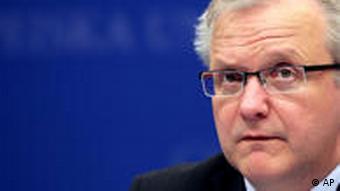 Under the National Recovery Plan, the Irish Republic aims to bring its budget deficit down from a projected 32 percent of gross domestic product (GDP) to three percent of GDP by 2014 by imposing tax increases, wage cuts and by curbing public spending.

Irish Prime Minister Brian Cowen conceded that the average living standard in his country was likely to suffer as a result of the severe cuts.

German Chancellor Angela Merkel and French President Nicholas Sarkozy were said to be "impressed" with the recovery program, after discussing the situation in Ireland by telephone on Thursday.

A statement from the chancellor's office added that both leaders "agreed that negotiations with the Irish government must be rapidly concluded."

The drastic austerity measures are the condition for Ireland to receive help from EU funds. Cowen has given 85 billion euros as the sum that his country would need, but negotiations with Brussels and the International Monetary Fund (IMF) are still ongoing.

Experts, however, warn that more money could be needed to avoid the former Celtic Tiger from sliding into bankruptcy. Constantin Gurdgiev, an economist at Trinity College in Dublin, said the situation was even worse than in Greece.

"Our economy has more than three times more debt. If Greece is bankrupt - what then are we?" he asked.

In the wake of the crisis in Ireland international financial markets are getting increasingly nervous about Portugal and Spain. Both countries are feared to be the next possible candidates in need of an EU bailout.

"There's nothing that politics can do to ease that tension on the markets," Lueder Gerken, head of the Center for European Policy, told the Neue Rhein Zeitung daily. 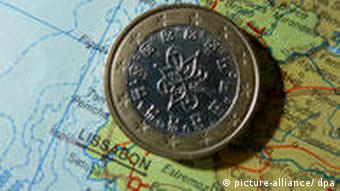 "Of course there will be a domino effect - regardless of what'll happen in Ireland. The markets have already set their eyes on Portugal, and Spain too looks to be set for trouble," he added.

Portugal, Spain insist they won't be next

Herman Van Rompuy, head of the EU council, is trying to calm those concerns. He said that any fears of a repeat of the Irish crisis in Portugal were baseless. Portugal's debt was lower, there wasn't a real estate crisis there, and the banks had enough capital reserves, Van Rompuy said. "All that talk has neither an economic nor a rational basis."

Portuguese Prime Minister Jose Socrates also tried to reassure the public that his country would not need any EU help. But his government's plans for tough austerity measures have met with strong opposition, strikes and demonstrations - and a one-day general strike on Tuesday.

Spain, too, tried to dismiss fears that it would soon need EU aid. "We are worlds apart from Ireland," Deputy Economics Minister Jose Manual Campa said. Unlike Ireland, Spain was a country with a comparatively low deficit and already in the process of consolidation, he added.

Yet experts are somewhat less optimistic than Madrid. Unemployment in Spain has reached 20 percent, and economic growth is stagnating.

The Portuguese government is planning to implement austerity measures to combat its debt crisis. The plans have raised the ire of workers, who went on general strike in protest. (24.11.2010)

The European Commission has distanced itself from remarks by Germany's chancellor and finance minister that the Irish debt crisis could threaten the single currency. (24.11.2010)