Iraqi President Jalal Talabani has arrived in Germany for medical treatment after he suffered a stroke earlier this week. Talabani is seen as a mediator between Iraq’s Sunni and Shiite populations. 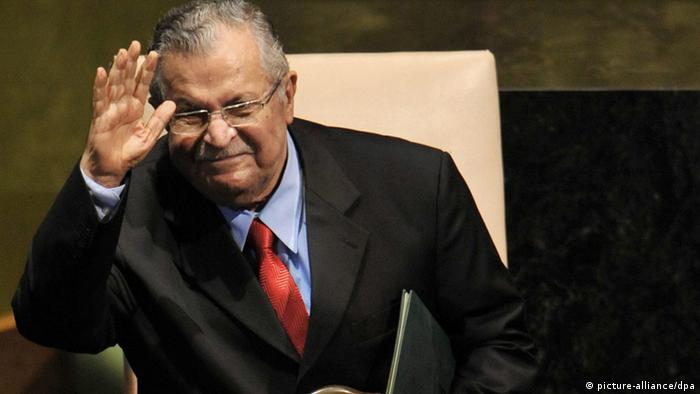 President Talabani arrived in Germany on Thursday for medical treatment, his office said.

"I can confirm that the Iraqi President Talabani is in Germany for medical treatment," German Foreign Minister Guido Westerwelle said in a statement. "I wish him a rapid and full recovery."

A team of doctors from Britain, Germany and Iraq assessed the president before announcing the decision to relocate him on Wednesday.

Questions remain about just how ill the 79-year-old is, although doctors say he has shown signs of improvement.

As a Kurd, he is seen as a mediator to bridge divisions between the country's majority Shiite and minority Sunni Muslim communities.

In the past year, Talabani has tried to convene a national conference aimed at reducing ethnic tension within the government.

The Iraqi president had successful heart surgery in the US in August 2008. The previous year, he was taken to Jordan to be treated for dehydration and exhaustion.

Talabani has been a prominent figure in Iraqi politics since 2005, initially as a Kurdish rebel.