Iraqi PM Talks Security and Business Opportunities in Berlin | Germany | News and in-depth reporting from Berlin and beyond | DW | 22.07.2008

Prime Minister Nuri al-Maliki said Iraq was able to look after its own security and was ready for major foreign investment, after holding talks with German Chancellor Angela Merkel in Berlin on Tuesday, July 22. 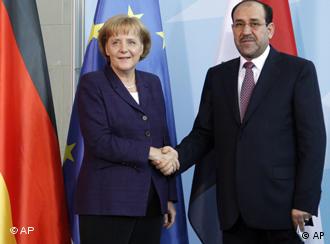 "The Iraq of today is not the Iraq of six months ago. We are making great progress in the security situation," al-Maliki said, adding there was now a considerable measure of freedom and democracy in the country.

"Iraq is able to take the security situation into its own hands," he said. "We have achieved great success."

Merkel said the security situation in Iraq was improving "step by step."

The chancellor said Germany was in a position to offer its technological expertise in return for access to Iraqi resources.

Germany could also offer its experience in creating and maintaining the kind of federal system of government that Iraq was setting up, she said, offering to train civil servants.

Merkel also noted that Iraq had an industrial history which could be drawn on when German firms re-entered the Iraqi market.

She welcomed other signs of progress in Iraq, such as the recent return of Sunni ministers to al-Maliki's government.

Al-Maliki was also due to meet with a number of German business leaders during his visit in the hope of reviving the trade relationship between the two nations. 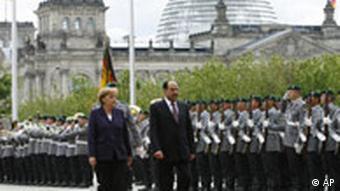 Al-Maliki arrived in Berlin looking to do business

Iraq was historically a strong partner for Germany, and in the 1980s bilateral trade reached four billion euros ($6.4 billion) a year. But by last year, Germany only exported goods worth a total of 319 million euros to the war-ravaged country.

German companies have always been eager to work with a country that has ample oil reserves and where reconstruction programs offer major contracts for makers of machine tools and industrial facilities, two German specialties.

Merkel has expressed strong interest in developing economic and business ties, and German companies are chomping at the bit.

Eckart von Unger, director of the Africa and Middle East department at the German industrial federation BDI, told the business daily Handelsblatt on Monday: "In the near future, we hope Iraq will again hit four billion euros, like in the good old days."

For now however, while many German companies have expressed interest in working in Iraq, few have taken the next steps.

Wintershall, a unit of the chemical giant BASF, is one of the few to actively seek contracts, in its case a license for oil drilling.

A BDI spokesman acknowledged that "we cannot say how many German companies are currently active in Iraq."

Insecurity, corruption and poor infrastructure are obstacles to many. 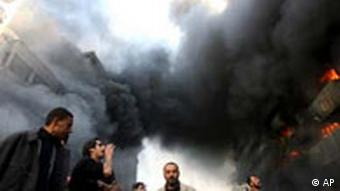 The risks are still high for everyone in Iraq

"The risks to Germans working there is still very high," said Axel Nitschke, head of the German chamber of commerce DIHK's external trade department, in comments to the Neue Passauer Presse newspaper.

Baghdad has pressed Berlin to abandon its official warning against travel in the still volatile Middle Eastern nation.

"It handicaps economic development," Iraqi Industry Minister Fawzi al-Hariri said last month during a visit to the German capital. "The German government should allow German companies to decide for themselves if they want to go to."

"In the end, it only results in Germans losing contracts, while Iraq, where German products have a good reputation, buys machines from China, Korea or Eastern Europe," he added.

"We need to begin by going where it is relatively safe," such as in Kurdish-controlled areas of northern Iraq. "As more regions become prosperous, they will set an example for the most dangerous ones."

Iraq is still a country in relative chaos despite some signs of tenuous stability. Early this month, the Sunni Iraqi Accord Front (IAF) announced it was rejoining the cabinet one year after withdrawing five ministers and the deputy prime minister from the government. 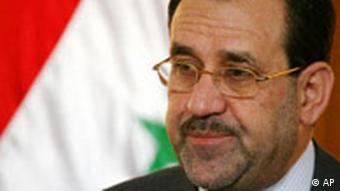 Al-Maliki is eager to rebrand his country

Al-Maliki said one of the key aims of his two-day visit to Germany was to "revise the image of Iraq."

He called for all refugees to return to Iraq, irrespective of their religious affiliation, stressing in particular that Iraqi Christians had a place in the country.

There has been concern in Germany at the treatment of Iraqi Christians and calls from some political quarters for Christians to be given preference in granting asylum applications.

On Monday, the German Foreign Ministry said it was to open a consulate-general next year in Arbil in the Kurdish region of northern Iraq.

Germany maintains an embassy in Baghdad, which has been hampered in its work by its location outside the most secure, US-guarded part of the city, the Green Zone.

Economy Minister Michael Glos paid a surprise visit to Baghdad this month, becoming the first German minister to do so since the 2003 invasion.

Confusion over US exit plan

Over the weekend, an interview al-Maliki gave to the German news magazine Der Spiegel caused a political furor when he appeared to back a plan by Democratic Party presidential contender Barack Obama to withdraw US troops within 16 months.

A spokesman for the Iraqi prime minister subsequently said he had been "mistranslated" and "misunderstood."

President George W Bush has steadfastly refused to be drawn on a timetable for withdrawal, and Republican candidate John McCain has taken a similar line.

Germany to Open Consulate-General in Kurdish Part of Iraq

Germany is to open a consulate-general with a senior diplomat in charge in Arbil, part of the Kurdish region of Iraq. (22.07.2008)