The deadliest day in Iraq in eight months has left more than 75 people dead in a series of bomb blasts. Sunni Muslim protest over Shiite-led government mistreatment are part of the cause of the conflict. 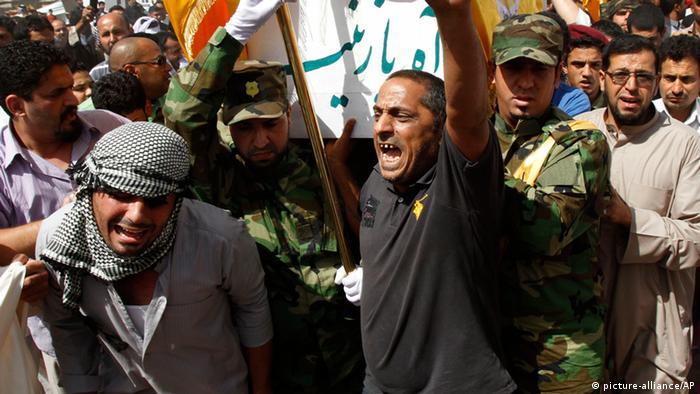 Bombs struck Sunni areas in Baghdad and surrounding areas Friday in the deadliest day in Iraq in more than eight months, officials said.

Tension has been building since Sunnis began protesting what they say is mistreatment at the hands of the Shiite-led government, including random detentions. The number of attacks has risen since a security crackdown on a Sunni protest camp in the country's north on April 23.

A series of bombings near Baghdad has killed dozens of people. The attacks, which targeted a Sunni Mosque and funeral procession, come at a time of heightened sectarian violence in Iraq. (17.05.2013)

Earlier on Friday, one bomb exploded outside the mosque in Baquba, about 50 kilometers (31 miles) northeast of Baghdad, and a second explosion tore into crowds of people rushing to help victims of the first attack, police said. At least 43 people died.

Eight others died and more than 20 were wounded by a similar device targeting people gathering for the funeral of a Sunni Muslim cleric who was killed a day earlier.

Two more were killed in the southern outskirts of Baghdad at another funeral for someone who died in one of a series of attacks in the capital on Thursday.

Four others were killed when a roadside bomb exploded next to a coffee shop in the city of Falluja. A roadside bomb in the Doura district of southern Baghdad killed three, according to police and medics.

No group claimed responsibility for the attacks.

The United Nations said April was the deadliest month in Iraq since June 2008, with more than 700 people killed and 1,600 wounded.