Iran's supreme leader on Sunday rejected international demands that his country suspend sensitive nuclear work, vowing the Islamic republic would not buckle in the face of "threats and bribes." 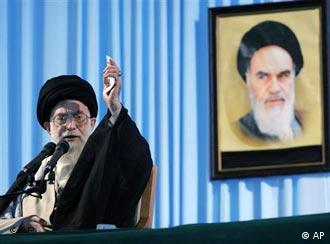 Khamenei defended Iran's nuclear program in front of a picture of his predecessor, Khomeini

Ayatollah Ali Khamenei also gave the United States a staunch warning that any "mistake" in its dealings with oil-rich Iran would lead to consequences for global energy supplies.

"We have achieved a lot of scientific goals," Khamenei said in a speech marking the 17th anniversary of the death of Iran's Islamic revolutionary leader, Ayatollah Ruhollah Khomeini. "This is an historic investment. It represents our political independence and national self confidence. We should not sell out this precious resource because of the enemies' threats and we should not be fooled by enemy bribes."

The five permanent members of the UN Security Council plus Germany are poised to present Iran with an offer of incentives and the prospect of fresh multilateral talks -- involving the United States -- on the condition that Iran first suspends uranium enrichment.

That activity is at the center of fears the country could make nuclear weapons. Iran insists it only wants to make reactor fuel -- and not bombs -- and that enrichment is a right enshrined by the Non-Proliferation Treaty.

Solana to travel to Tehran 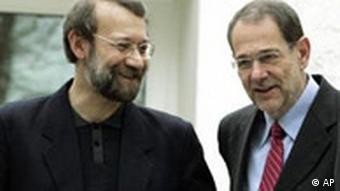 EU foreign policy chief Javier Solana is expected in Tehran in the coming days to present the proposals. Iran has been given just weeks to make up its mind -- or else face Security Council action including possible sanctions.

But Khamenei added to indications that the offer could end up being dead on arrival by shrugging off any fear of the consequences.

"There is no consensus against Iran," he said. "It is only the Americans and some of their allies. This is all about a political monopoly of energy. They want others to beg for energy."

Speaking at Khomeini's mausoleum on the southern outskirts of Tehran, Khamenei insisted that "Iran is no threat to anyone.

"We have friendly relations with all the region and Asia," he said. "We have good and healthy relations with Europe, and in the close future, because they need our gas, these relations will become even better. They accuse us of developing nuclear bombs. This is an absurd lie. We do not need nuclear weapons and bombs. We don't have any target to use them on.

"Using nuclear weapons is against Islamic rules," he continued, according to AFP news service. "We will not impose the costs of building and maintenance of nuclear weapons on our people. Our explosive source is the power of our faith." 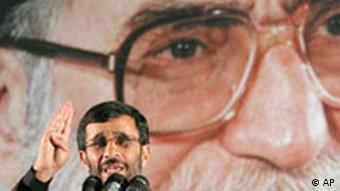 Ahmadinejad with a giant poster of Khamenei on Sunday

On Saturday, Iranian President Mahmoud Ahmadinejad revealed that in a telephone conversation earlier Saturday with UN Secretary General Kofi Annan, he had been asked "to examine the proposals and not act hastily."

"I said that we will not act hastily and that we will examine the proposals," Ahmadinejad said while ruling out any halt to the country's enrichment program.

"Negotiating our absolute right would be like accepting to negotiate on our independence," he said, according to news reports.

Europe Hails US Offer of Talks with Iran

On the eve of meetings over Iran's nuclear aspirations in Vienna, the US offered to join direct talks for the first time. But Iran said Thursday it won't accept. (June 1, 2006)

After agreeing to a landmark package intended to lure Iran to cease its nuclear activities, key world powers are waiting to see what the Islamic nation has to say. (June 2, 2006)

Protesters outside Büchel Air Base want the government to tell the United States to get its nuclear weapons out of Germany. But, with a war raging in Europe, they aren't getting much attention.