Iran has freed lawyer and human rights activist Nasrin Sotoudeh who was jailed for "conspiring against state security." Several news agencies have reported that at least 10 other political prisoners were also freed. 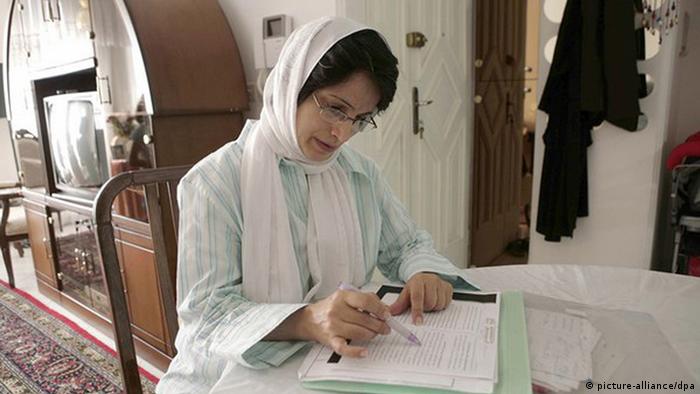 He told Reuters Sotoudeh was dropped off at their home by prison officials on Wednesday evening. Khandan also said no reason for the release was offered by the authorities.

"It's not a temporary release, it's freedom," Khandan said by phone from Tehran. "They put her in a car and dropped her off at the house."

Sotoudeh was arrested in September 2010 and sentenced to six years in jail for spreading propaganda and conspiring to harm state security.

She had defended journalists and rights activists including Nobel Peace laureate Shirin Ebadi. In December, she was awarded the European Parliament's Sakharov Prize for freedom of thought.

The United Nations, European Union and international human rights groups had called for Sotoudeh to be freed, calling her a prisoner of conscience.

The West is hoping for progress in nuclear negotiations with Iran - because of signals of a new reliability under President Rouhani. Iran meanwhile hopes for an easing of sanctions. So is a breakthrough on the cards? (10.09.2013)

Several other political prisoners were also freed according to news reports. Among them were ex-deputy foreign minister Mohsen Aminzadeh, reformist politician Feyzollah Arabsorkhi and reformist journalist Mahsa Amirabadi. The number of prison releases was not immediately clear, but preliminary reports concurred that at least 11 people - including Sotoudeh - had been freed.

They had been arrested for alleged involvement in anti-government protests in 2009 following the disputed re-election of President Mahmoud Ahmadinejad.

Amnesty International welcomed the release but said it must "mark the fundamental shift in Iran's policies on human rights," or be seen as a publicity stunt ahead of the Iranian president's upcoming trip to to attend the United Nations General Assembly in New York.

President Hasan Rouhani, who took office last month, pledged during his election campaign to ease political and social restrictions both inside and outside of Iran.