Investigators find both black boxes from unsolved Air France crash | Europe | News and current affairs from around the continent | DW | 03.05.2011

Both flight data recorders have been recovered from an Air France flight that crashed off the coast of Brazil in 2009. Investigators hope the devices can provide answers to why the plane went down, killing 228 people. 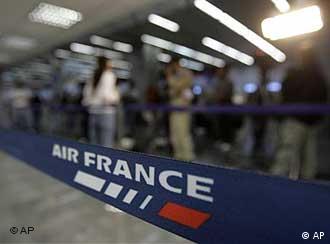 The black boxes could give vital clues about the crash

Deep sea search teams have located both flight data recorders from the Air France flight that crashed mysteriously in the Atlantic Ocean in June 2009, killing all 228 people on board.

The first black box was "localized and identified" on Sunday morning and brought up from a depth of 4,000 meters (4,375 yards) according to a statement by France's Bureau of Investigation and Analysis (BEA). Photos on the BEA website, before the box was pulled to the surface, show an orange cylindrical object half buried in the sand.

The second black box was recovered Monday evening by a robotic submarine "in good condition," according to BEA chief Jean-Paul Troadec. The two boxes were found within 10 meters of each other and have been sent to Paris to begin analysis in about a week.

According to officials, it was too early to say whether the devices would yield information about the cause of crash of Flight 447, which was en route to Paris from Rio de Janeiro.

The extent of what can be found out about the disaster depends on how much of the flight recorders' data has been corroded. Damage to the data will hinder the investigation but not necessarily rule out determining the cause of the crash.

Speculation about what caused the accident has focused on the possible malfunctioning of the aircraft's speed sensors, which seemed to give inconsistent readings before communication was lost.

The recent discovery of pieces of the plane's wreckage and the chassis of the flight recorder had reignited hopes of finding the recording devices and solving the mystery of the crash.

The search for the black boxes has taken 23 months and cost 35 million euros ($52 million), which is being paid for by Air France and Airbus.

Nearly two years after an Air France flight from Brazil crashed and killed all 228 passengers, a search of the suspected crash site in the Atlantic has turned up more debris. (04.04.2011)

The French navy has renewed its search for the flight recorders of an Air France jet that crashed in the mid-Atlantic last June. However, officials caution that actually retrieving the black boxes could prove impossible. (06.05.2010)

Search and rescue teams scouring the suspected crash site of Air France flight 447 have found debris and oil believed to be from the ill-fated Airbus. No trace of any of the 228 people on board has been found. (04.06.2009)