Guatemala has arrested a former aide to President Otto Perez on suspicion of corruption, the latest scandal to batter the administration during its final months. Gustavo Martinez is also the fiance of Perez's daughter. 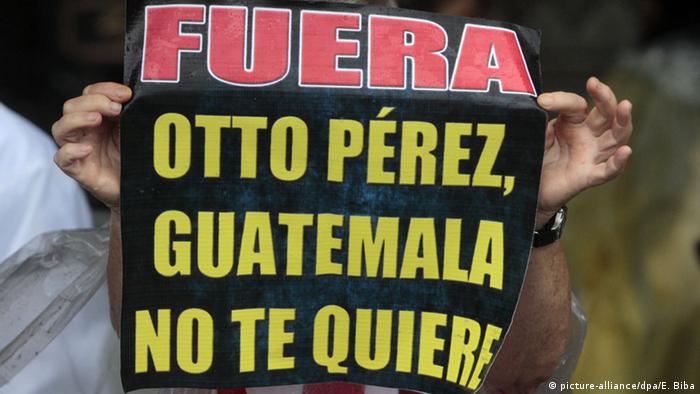 Authorities have accused the son-in-law-to-be of Guatemalan President Otto Perez Molina of greasing wheels for an energy company and collecting a tidy profit while doing so. Prosecutors say Gustavo Martinez, a former secretary-general of the presidency, trafficked in influence, along with Ramos Rodas Solares, who had served as energy and mines minister for seven days in May before also being arrested on Thursday. Authorities also detained others for complicity, including a woman believed to have collected the money for Martinez, drawing a fake salary from a firm called Jaguar Energy.

The UN-backed International Commission against Impunity in Guatemala (CICIG) reported that Martinez, the ex-minister and two others had taken advantage of their posts to sell favors. Ivan Velasquez, commissioner of the CICIG, said Martinez had helped set up meetings for Jaguar Energy in exchange for payments worth at least $120,000 (108,000 euros) over a six-month period that ended in January.

Martinez, 56, left his job in June to "not exhaust" the government with negative attention.

Prosecutors say Martinez took the bribes to help remove legal and environmental barriers to the $900 million power station Jaguar Energy is building - the region's biggest. Lawyers representing Martinez did not immediately comment, nor did Jaguar Energy, a subsidiary of the US company Ashmore Energy International.

In recent weeks, thousands of Guatemalans have staged demonstrations demanding that Perez step down (pictured), but the president insists he will stay in office until January 16, when his replacement is set to take over. Perez, 64, has seen members of his government drop like flies ahead of the September election, in which he cannot run because of term limits.

Vice President Roxana Baldetti resigned May 8, after news reports linked her to a customs corruption racket exchanging lower import duties for cash. She, too, has denied any wrongdoing.

On May 20, police arrested the central bank governor and one of Perez's former secretaries in a separate probe. A day later, Perez fired several high-ranking ministers accused of graft by Guatemalan media.

No one has directly accused Perez of wrongdoing, though the Congress could strip him of his immunity to allow prosecutors to investigate him in pending cases.

"I have nothing to hide," Perez said Thursday after a meeting with US officials.

An international team of vets have finished a complex procedure on 16-year-old Madhubala, who had an infected tusk.