Internet in Africa: Empowerment or exploitation?

Millions of users, young and mobile: Africa’s Internet market is lucrative and big ICT companies are grabbing the opportunity to get involved. Whether this will benefit users, was debated at the Global Media Forum. 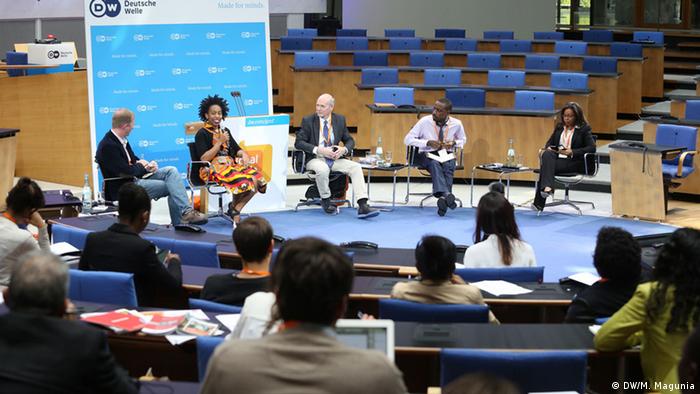 Ebele Okobi is at home in the world of status updates, online comments and "Likes." She works at the Internet giant Facebook in London. As head of Public Policy, she is among those responsible for the companies business initiatives in Africa.

She sits now in front of the audience at the Global Media Forum in Bonn, discussing Africa's digital opportunities. Listening to her, one gets the impression that these opportunities are almost unlimited.

Of course the Internet alone cannot solve all the problems, she says. "But I do think that there is an incredible value of being connected." Okobi thinks it is a "catastrophe" that people have unequal access to the Internet. "For me one of the statistics which are most alarming is the rate of Internet penetration."

Rebecca Enonchong nods in agreement. The Cameroonian is the CEO of AppsTech – and she is very aware of the challenges in her home country. "You cannot upload video with that level of bandwidth. The wholesale cost per megabyte of bandwidth in Cameroon is 12,000 dollars (10,730 Euros). Once you have distributed that one megabyte to a large population, if you get 128 kilobytes, you are lucky." 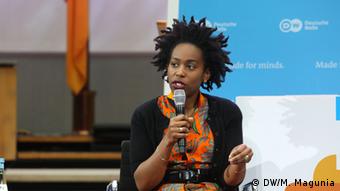 Ebele Okobi says Internet is the way forward in Africa

Cameroon simply lacks the political will to create the necessary infrastructure, Enonchong says. "The government of Cameroon is scared of the Internet" and wont make it accessible and cheaper. The revolutionary potential that lies in social media could be seen in North Africa during the Arab Spring.

Many governments in Africa were slow to react to the frenzied digitalization – or they even deliberately ignored it, noted the experts in Bonn. Even the Ugandan government took too long to allocate the necessary budget to the public communications sector, said Albert Mucunguzi, founder and chief editor of the PC Tech Magazine in the East African State. Wherever governments do little or nothing, that's where large ICT companies are trying to secure markets.

Ebele Okobi from Facebook uses the opportunity provided by the Global Media Forum to promote the company's new vision. With Internet.org, Facebook wants to provide millions of people in developing countries, especially in Africa, with access to the Internet. The service could be used by network providers free of charge for themselves and their users. For instance, by using the Internet.org app, Airtel customers in Ghana would be able to access a whole range of online pages and Internet services for free.

A man from Senegal in the audience, who introduce himself als Tijan, is skeptical. "We Africans should not fool ourselves. Be it Facebook, be it Google, be it anyone or any other company in the world – they are coming for business," he says.

That the talk, for example by Internet.org about the digital divide and the inequality of access is "nonsense," Tijan said. Big companies would enforce their own rules in target markets.

"Facebook is making big money in Senegal, but it doesn't pay taxes there," Tijan said. African governments and citizens should be concerned about such issues. Otherwise the same thing as is happening in Senegal can happen elsewhere, namely that a network provider, Orange, is making million of euros in Senegal and reinvesting the money not in Africa but in France. 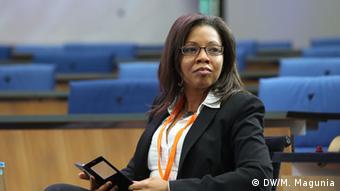 Other African participants in the debate wanted Ebele Okobi to explain how Internet.org and Facebook are dealing with the issue of privacy. Okobi reassured the audience that Internet.org is not going to Africa in order to tap users' data and sell them. She also defended her company in tax issues. To date, Facebook has never had an office in Africa, and so does not pay taxes there.

Framework conditions for Africa still have to be negotiated, Okobi said evasively and pointed out that many tax issues are not clear even in Europe where Facebook is making huge sums of money. Generally, she said there is a need for reasonable taxation that allows the communications sector to grow in Africa.

Only ensuring access to the Internet is too short-sighted, said Rebecca Enonchong.

"When we talk about new possibilities and capabilities through the Internet, you have to talk about media literacy, how to properly deal with content and how the content is created," she argued.

Research is important in order to understand how Africans are using the Internet for development purposes, added a participant from Ghana. Only then can one say whether it is an empowerment or exploitation.

Social media has made communication much easier, but extremists use this very method to spread terrorist ideas. Governments and NGOs are finding it tough to catch up, as experts discussed at DW's Global Media Forum. (23.06.2015)

Media, politics and the digital age

What's the effect of social media on politics? How is the Internet-driven 24-hour news cycle changing media? These issues will be discussed at the 8th Global Media Forum, which kicks off in Bonn on Monday. (22.06.2015)

Nothing can be taken for granted and a single insensitive tweet or statement can cause anything from global outrage to a diplomatic row between two countries. - written by Elnathan John (16.06.2015)