A team of international observers in Fiji have called the South Pacific nation's historic election a "credible" poll. With counting well underway, self-appointed leader Frank Bainimarama is on track to claim victory. 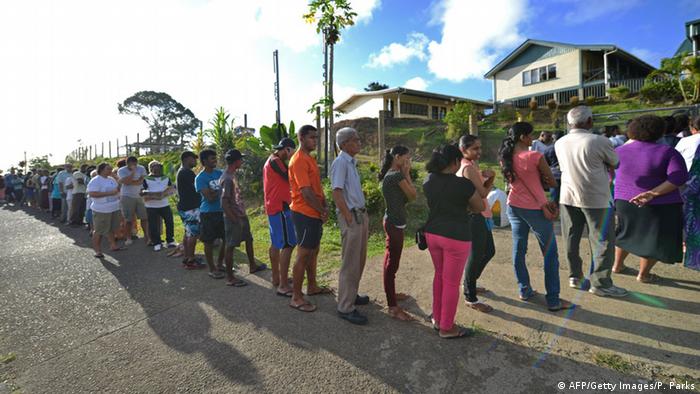 The Multinational Observer Group overseeing the election on the ground said Thursday that the result would broadly reflect the will of Fijian voters.

"This was a credible election," it said in a preliminary statement.

The group of almost 100 monitors, led by delegations from Australia, India and Indonesia, added that the vote had been "conducted in an atmosphere of calm, with an absence of electoral misconduct or evident intimidation."

About half of Fiji's 900,000 people were enrolled to cast their ballots in Wednesday's election - the first democratic poll since Voreqe "Frank" Bainimarama took power in a bloodless coup in 2006.

The former navy officer is a candidate for prime minister with the Fiji First party, and had been projected as the favorite to win.

Vote counting is still underway, but with returns from three-fifths of polling stations in on Thursday, Fiji First had 60 percent of the vote, while its closest rival, the Social Democratic Liberal Party (Soldelpa), was trailing with 27 percent. Final results may not emerge until Saturday.

The 2006 coup marked the fourth time Fiji's government had been overthrown in less than 20 years. It saw Fiji slapped with international sanctions and suspended from the Commonwealth of Nations and the Pacific Islands Forum.

After seizing power, Bainimarama took steps to tear up the constitution and sack the judiciary. Although his rule brought some stability to a country struggling with tensions between indigenous Fijians and descendents of Indian migrant workers, it has also been characterized by alleged human rights abuses and media censorship.

Following a positive endorsement from the international election monitoring group, many of the sanctions affecting the island nation are expected to be dropped.

Australian Foreign Minister Julie Bishop said she "looks forward to working with the new Fiji Government when it is formed."

Her counterpart in New Zealand, Murray McCully, said "all early indications are that the conditions were in place for the people of Fiji to exercise their right to vote freely."

Complaints from the opposition

Meanwhile several opposition parties have raised concerns about the election's integrity, saying the vote count should be suspended until their complaints - including tampering with ballot boxes - have been investigated.

The election monitoring group noted some problems with voter registration and pre-polling, but observers did not find evidence of misconduct or irregularities in the vote counting process.

"Political parties were able to mobilize and candidates were free to campaign. The campaign period was peaceful. However, civil society participation in the process was restricted," it said.

Fiji's 590,000 registered voters chose from almost 250 candidates for the country's 50-seat parliament. A government must be formed within 17 days of the vote.

Fijian Defense Minister Inia Seruiratu said his country was threatened more by climate change than the geopolitical competition in the region. Fiji has borne the costly impact of several cyclones in recent years.

US Secretary of State Antony Blinken announced the US would reopen its embassy on the Solomon Islands to help Washington counter Chinese influence.