Instant Aging with a Wearable Time Machine | Germany | News and in-depth reporting from Berlin and beyond | DW | 19.02.2003

A firm in Germany has developed a suit that enables the young and fit to see what it's like to be old and frail. Those trying on the "Age Explorer" get a foretaste of life at 70. 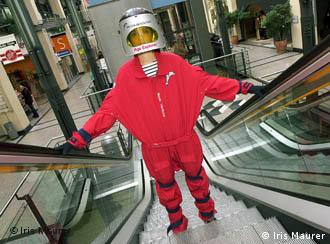 In the youth-oriented culture of today, there is often a marked lack of sympathy for members of society over 65. As the world continues to be predominantly driven by all things "young", the limitations brought about by old age -- arthritis, stiffness, loss of hearing, and a general slowing down -- are often met with little understanding, or even outright contempt.

Not so for the guinea pigs who submit themselves for a turn in the Age Explorer, a kind of instant-aging suit developed by the Meyer-Hentschel consulting firm in the German city of Saarbrücken. Ten minutes spent in the Age Explorer is enough to imbue instant sympathy with the elderly even in the most adamant ageist.

"Younger people who try on the suit say, finally, I understand why older people act the way they do," said Hanne Meyer-Hentschel, the suit's creator.

The Age Explorer brings about this generational appreciation by propelling its wearers decades into the future by simulating how the body might behave at the age of 70. The suit's red overalls have 13 pounds of weights sewn into them and pads strapped to the elbows and knees stiffen those joints. Walking across a large room wearing the suit becomes a slow, exhausting experience. The thick, red Age Explorer gloves have a Velcro-like substance sewn into them: Putting them on brings about instant arthritis, since any pressure applied to the hand feels like a thousand tiny needles digging into one's flesh. 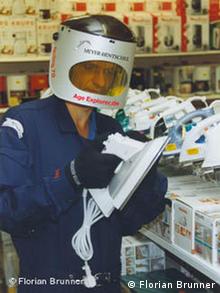 As if that weren't enough, headphones, similar to the ear protection airport baggage handlers wear, take away a good deal of one's hearing. A welder's mask-like face shield robs the subject of his peripheral vision, its yellow glass leaves the world looking strange and blurred.

"It's all about the physical changes that we're all going to face sooner or later to some degree," said Beate Baltes of Meyer-Hentschel, who babysits those getting their first taste of old age. Not everyone who reaches 70 is going to have arthritis or failing eyesight, but the Age Explorer is meant to simulate a possible future in which things one takes for granted today will not be quite as self-evident.

Not so easy anymore

Simple things like picking up a napkin out of a stack takes Age Explorer wearers intense concentration, and about two minutes. Pulling a wallet out of a back pocket with newly arthritic hands becomes a painful and frustrating experience. Once that's accomplished, dispair can be the next emotion to set in when trying to recognize or pick up the different coins there.

After an tedious, tiring walk across a large room, most of the newly aged are ready for a break on a comfortable sofa. But while taking a seat is welcome, the difficulty in getting back up on one's feet again almost makes the sitting not worth the trouble.

"At first it was funny in a way, like you're in some kind of Halloween costume," said Lisa Neundorfer, a marketing researcher who has tried out the suit. "But then you realize how cut off you are from your environment. Suddenly you have a whole new perspective on things."

The Age Explorer is more than just a strange toy to encourage inter-generational understanding, it is also a tool for business, allowing marketers and product developers to get a feel for the experiences and limitations of the elderly, a market which is growing by leaps and bounds.

While 10 percent of the world's population is now over 60, according to a United Nations forecast, that percentage is expected to grow to 22 percent within the next two decades. In Germany, a country with one of the lowest birthrates in the western world at just 1.3 children per woman, the population is graying at rapid pace. In 30 years, demographers predict one-half of the German populace will be over 50 years old. The buying power of this segment of the population in also on the increase and discretionary income is highest in the over-50 group. Companies are slowly starting to realize that the senior market is soon to be a very lucrative one.

"The baby boomers are geting older and they are very important for the economy because they have the money and they want to consume," said Vera Heuser of the German Direct Marketing Association, which has carried out studies about the demographic changes going on in Germany. It makes sense for companies to understand members of the senior population if they want to develop product and services that are appropriate for them.

"However, usually people in adverstising or marketing are very young, so they cannot imagine how it feels if you are older and what kinds of problems older people have," said Heuser. She cites the tiny buttons on cellular phones or the increasingly complexity of video recorders as the kinds of product features that make them largely inaccessible to older people.

The Age Explorer aims to change that. Hanna Meyer-Hentschel began developing it with the help of gerontologists after a Swiss firm asked for advice on making its shops more accessible to the elderly. Now Meyer-Hentschel says more and more companies, such as car and appliance makers or travel companies, are sending their young hotshots to get a taste of what life's like for Grandma and Grandpa.

Her company is working on the third generation of the suit which takes age simulation to the next step. Age Explorer III will be able to mimic certain mental conditions among the elderly, like confusion or interrupted thought processes. Put enough people into the thing, according to one wearer, and it might just spark a renewed hunt for the legendary Fountain of Youth.