Indonesia's military says there is no hope of finding survivors from a submarine that sank last week with 53 people on board. President Joko Widodo has sent his condolences to the crew's families. 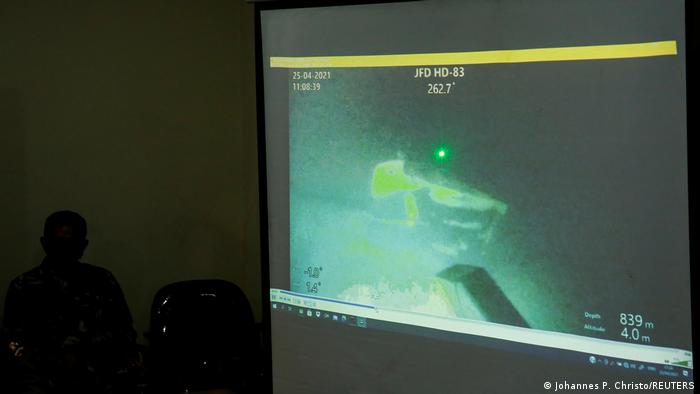 The submarine has broken into at least three pieces

Navy Chief of Staff Yudo Margono said the submarine had been broken into three pieces.

"With this authentic proof, we can confirm that KRI Nanggala 402 has sunk and all of its 53 sailors have died on duty," Air Marshall Hadi Tjahjanto told a press conference.

Underwater drone images showed the wreckage on the seafloor. It was found by a Singaporean craft about 1,500 meters (5,000 feet) to the south of where it last dove.

Indonesian President Joko Widodo earlier offered his condolences to the families of those lost in a submarine accident four days ago.

He confirmed that the KRI Nanggala 402 submarine sank, and that the 53 crew members are presumed to have died.

"All of us Indonesians express our deep sorrow over this tragedy, especially to the families of the submarine crew," he said.

He said rescuers were still expending their best efforts to recover the craft and its crew. He offered his hopes and prayers, and wished the families patience and strength.

How did the submarine go missing?

The 44-year-old West-German-built submarine lost contact while taking part in torpedo drills off the coast of Bali on Wednesday.

It failed to surface and only had enough oxygen for the crew to survive up to 72 hours.

Rescue teams announced on Saturday they had found objects such as prayer mat fragments, a piece of the torpedo system and a bottle of periscope lubricant near the submarine's last known location.

This led them to believe that the vessel had broken open.

Indonesian sub declared to be sunken

Ships and helicopters from Australia, the United States, Singapore, Malaysia and India are helping in the search effort.