The volcano has been increasingly active of late, with at least 15 smaller eruptions recorded in the past week. Locals have been advised to stay several kilometers away from the crater. 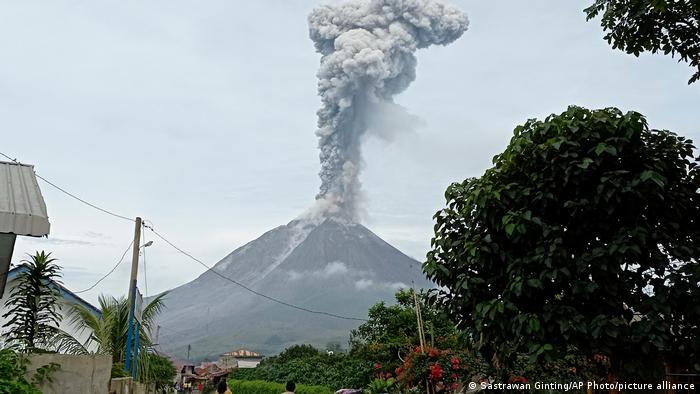 Sinabung erupts again, with locals told to stay up to five kilometers away from the crater's mouth.

The eruption lasted more than six minutes as ash billowed above the volcano, but there were no immediate reports of casualties, the agency reported.

Residents have been advised to stay 5 kilometers from the crater and have also been warned of possible avalanches of volcanic debris.

Sinabung has become increasingly active of late, with at least 15 smaller eruptions recorded in the past week.

"The potential for eruption is still high. There will be more eruption in the near future," said Armen Putra, an official at the Sinabung monitoring post.

Mount Sinabung is located on the seismically active zone known as the "Ring of Fire" — an arc of volcanoes and fault lines encircling the Pacific Ocean. Sinabung has been erupting intermittently for years, with some 30,000 people displaced as a result.

Indonesia has 127 active volcanoes — more than any other country in the world — and in 2016, nine villagers were killed after Sinabung erupted.

A new hazard map suggests that as many as 1.3 billion cubic meters of lava could flow from the crater. Some experts say, however, that the heightened warnings are causing unnecessary fear.

A volcano in southwest Iceland has erupted — as anticipated following thousands of smaller earthquakes in the area in recent weeks.