Torrential downpours sparked massive floods and landslides on Sunday, with thousands of homes submerged in the two countries of Southeast Asia. Disaster officials warn that the threat isn't over yet. 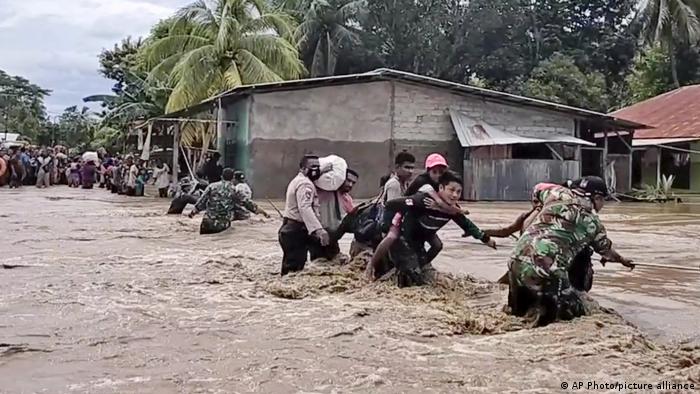 Scores of people have been killed in Indonesia and neighboring East Timor after Cyclone Seroja battered the region over the weekend, officials said on Tuesday.

At least 120 people are confirmed dead so far. Indonesia's disaster agency revised down its total death toll to 86 from a previous 130, citing miscommunication with local agencies, according to news agency AFP. In East Timor, another 34 have been officially listed dead.

Torrential rains triggered massive floods and landslides on Sunday that devastated communities in a remote cluster of islands in eastern Indonesia as well as the half-island nation of East Timor.

The death toll could rise further, with the Indonesian disaster management agency reporting that more than 100 people are still missing.

Rescuers are having a hard time searching for survivors in hard-hit areas due to electricity outages and roads being blocked by debris.

More than 8,000 people in Indonesia have been displaced by the extreme weather, with many fleeing to emergency shelters.

While meteorologists expect the cyclone to move southwest away from Indonesia later on Tuesday, officials fear more damage could come.

"We could still see extreme weather [from the cyclone] for the next few days," said Indonesia's national disaster agency spokesman Raditya Jati.

Already struggling to accommodate thousands of evacuees, local authorities are also concerned about curbing spread of the coronavirus.

"These evacuees fled here with just wet clothes on their backs and nothing else," said the deputy mayor of Lembata Island, Thomas Ola Longaday.

The European Union said it was ready to aid poverty-stricken East Timor, officially known as Timor-Leste.

"The catastrophic floods come at a time when Timor-Leste is working hard to contain the spread of COVID-19 among its population, putting a considerable additional strain both on resources and on the Timorese people," the EU said.

Indonesia and East Timor frequently experience natural disasters. Indonesia is the largest island nation in the world; its rugged terrain complicates reaching people in need after storms and heavy swells.

Large parts of the region have also been subject to deforestation, eliminating a major natural barrier against floods.

With its approximately 130 active volcanoes, Indonesia is also located onthe Pacific Ring of Fire, the most geologically active zone on earth.