Dozens of survivors have been taken to hospital after the bus plunged into a ravine on the main island of Java. Authorities say the condition of the vehicle may be to blame. 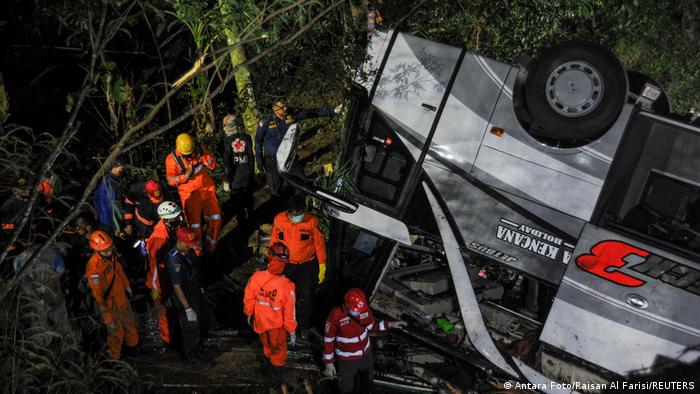 Rescue workers managed to save 39 people from the accident site

A bus carrying schoolchildren and their parents crashed in Indonesia on Wednesday night leaving at least 27 people dead, the country's transport ministry said on Thursday.

The passengers were students, teachers and parents from an Islamic junior high school from the town of Subang who were returning from a pilgrimage, the local police chief Eko Prasetyo Robbyanto said.

"The fatalities are a mix of children and adults," rescue agency official Mamang Fatmono told AFP.

A survivor from the crash, Mimin Mintarish, said the bus had wobbled before the crash. "Passengers smelled something burning and the driver said the brake failed," she told the Detik.com news portal.

"I was trapped on my seat, but managed to crawl out of the bus. Thank God my two children were safe," she said.

What happened to the bus?

The bus plunged into a 20-meter (65-foot) ravine, landing on its side, in Sumedang in West Java province after the driver lost control. The ministry reported that 39 people had survived and a local search and rescue agency had taken them to a nearby hospital.

Police said they were investigating the cause of the accident — survivors said that the breaks on the bus had malfunctioned.

The driver was among those killed in the accident.Thirteen of the survivors were being treated for serious injuries, rescue agency chief Deden Ridwansah said.

Relatives of the passengers waited in Sumedang's general hospital to find out what had happened to their loved ones. Others were taken to a local morgue to identify bodies.

History of traffic accidents in Indonesia

Traffic accidents are a common occurrence in the southeast Asian country. Non-roadworthy vehicles are often kept on the road and traffic rules are frequently flouted.

A similar accident on the island of Sumatra killed 35 people in late 2019, when a bus fell into a ravine and crashed into a fast-flowing river.

In 2018, some 27 people were killed when a tourist bus fell from a hill on Java.