Indian rights activist Irom Sharmila has been re-arrested two days after she was released on a court order. She has been protesting against an Indian law that suspends rights protections in insurgency-marred areas. 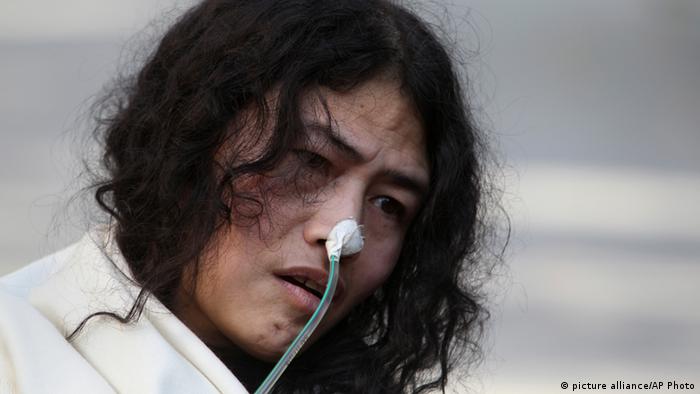 It was not clear on what grounds Sharmila had been re-arrested. Her brother Irom Singhajit told the media on Friday, August 22, that the police dragged the activist from her protest site in the northeastern city of Imphal after she refused to undergo a medical check or be force-fed.

"They (police) have not given any reason for her re-arrest," he said.

Often dubbed as the "Iron Lady," Irom Sharmila has not eaten a single morsel of food voluntarily for 14 years. On Wednesday, August 20, the 42-year-old appeared outside the isolation ward of the Jawaharlal Nehru Institute of Medical Science in Imphal. She looked frail and teary, but determined. India's famous prisoner of conscience vowed to continue her hunger strike.

Sharmila began her protest in November 2000 against the controversial Armed Forces Special Powers Act (AFSPA) and was arrested three days later on charges of attempting suicide - a crime in India. Prison officials force-fed her through a tube in her nose while she was detained. The AFSPA allows security forces to search and arrest without a legal warrant. It also gives the forces the power to open fire on militants if they deem it necessary.

A local court in the northeastern state of Manipur on Tuesday ruled that Sharmila had been wrongly charged and ordered her release. "Her protest was legal,” the court said. 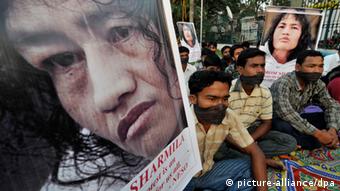 The news of her release made her supporters euphoric. A number of activists had stood by Sharmila throughout her 14-year-long detention.

"It is a landmark judgment. We are also happy that other activists who used hunger strike to protest will now be freed. The government should repeal this draconian law," Khaidem Mani, Sharmila's lawyer, told DW from Imphal.

"Laws such as the Armed Forces Special Powers Act (AFSPA) prolong militancy and mistrust in restive states. It is high time the government scraps this piece of legislation and strengthen democracy," Loitongbam told DW.

An Indian court has ordered the release of human rights activist Irom Sharmila, who has been on a hunger strike for the last 14 years. She was protesting rights abuses in the eastern Indian state of Manipur. (19.08.2014)

The world's longest hunger striker, India's Irom Sharmila, has been fasting for 12 years to demand the repeal of legislation that gives immunity to soldiers. She has refused to plead guilty to attempted suicide. (06.03.2013)

Many in the violence-ridden Indian north-eastern state of Manipur say they feel isolated and neglected by the central government in New Delhi. (20.04.2012)

Sharmila still refuses to eat and says she will continue with her hunger strike. She says she will now try to go to different areas to mobilize people against AFSPA as she is no longer in custody.

"I want people to protest against the law. I will not rest until it is repealed," Sharmila told DW from Imphal.

Civil society and rights activists argue that the immunity that the law provides to security forces has allowed hundreds of alleged extra-judicial killings, enforced disappearances and other human rights abuses. The government, on its part, says that armed forces need the law to curb militancy.

"The government has thus far been a mute spectator to anti-AFSPA protests. There have been accusations of sexual assaults by armed forces fighting insurgency in certain areas, but no one has ever been convicted," Sukhas Chakma, director of the Asian Centre for Human Rights, told DW.

Last year, the Indian Supreme Court appointed a judicial commission, which declared that the AFSPA was a "mockery of law" as it had been misused and had been largely ineffective in dealing with insurgents.