Health workers are combining emerging mobile health technologies with community participation to combat tuberculosis in India, which is home to 25 percent of the world's patients of the debilitating disease. 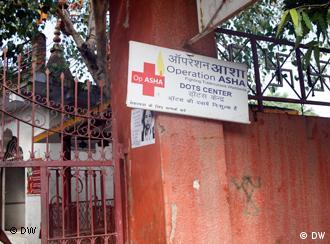 Tughlakabad temple is one of 35 EDTOS stations in New Delhi

A bell rings at 8.30am in Tughlakabad temple, South Delhi. The air is thick with the smell of incense and cooking as 16-year-old Kumar, the day's first patient, walks in to collect his medication before school. Kumar has spinal tuberculosis.

He is greeted by 21-year-old Shammo Khan who works for Operation ASHA, an NGO that uses a low-cost technology system known as "EDOTS" to monitor and administer medication to tuberculosis (TB) patients.

"There are problems with patients completing their treatments," says the nurse and counselor. "Sometimes, if a patient feels better after a few months they stop taking their medicine. And often at the beginning of a course of treatment, there are some uncomfortable side effects."

But defaulting can have irreversible consequences, which is why EDOTS is such a welcome system. 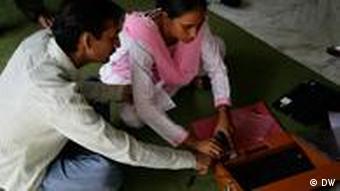 The EDTOS system is very user-friendly

Developed by Microsoft Research and Innovators in Health, it is an enhanced version of the DOTS (direct observation treatment short course) system, which is advocated by the World Health Organization (WHO) as the most effective combatant of TB. The system has seen a less than 1 percent default rate since its inception in 2010.

The WHO's 2011 TB report indicates that worldwide rates are falling for the first time. India, however, retains the world's highest TB burden with 3.5 million existing patients and around two million new cases annually, accounting for around 25 percent of the world's TB patients. The debilitating disease is most prevalent in 16 to 45 year olds, with the World Bank estimating the disease costs the Indian government three billion US dollars in lost earnings per year.

Operation ASHA has set up 34 stations equipped with EDTOS across the capital. The system is simple to operate, even with poor literacy or IT skills, and no Internet access is required at the point of contact. Data is sent via SMS to an online server and then downloaded and collated in a report at the end of the day at Operation ASHA's main office. Counselors, who work a designated area, are alerted via SMS if a patient misses a dose, after which they must visit their homes to deliver the medication.

Slums are the ideal 'breeding ground' 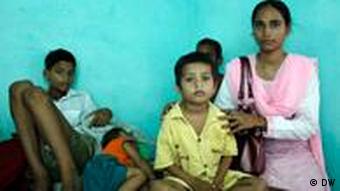 Around 50 percent of New Delhi's population lives in slums like Tughlakabad. These provide the "ideal ground" for the spread of TB infection, says Dr. Shelly Batra, President of Operation ASHA.

"First, because those who are malnourished are most likely to have the disease. Secondly, the slums are overcrowded with families of six to 10 people crammed in little more than one room of 6 by 8 feet. They breathe the same air through the night. So if one person is suffering from TB, others get it too."

Shammo and Kumar sit together on a colorful rug on the temple floor. Shammo opens up a basic laptop in a protective wooden box, with a cell phone and a biometric finger print reader attached. She scans Kumar's fingerprint and makes a record.

"Our system costs are minimal,’ says Operation ASHA CEO Sandeep Ahuja. ‘When you consider that it completely eradicates the risk of our patients contracting multidrug-resistant (MDR) TB, the return is incredible."

There were close to 99,000 MDR TB cases in 2008 in India and according to the Stop TB Partnership it could infect more than two million people by 2015, causing hundreds of thousands of deaths.

"It is a huge health concern for India's future," says Dr. Alok Agarwal of Delhi's private Apollo Hospital. "The cost is tremendous; an 18 to 24-month treatment period that involves very expensive medication. It is also highly infectious." 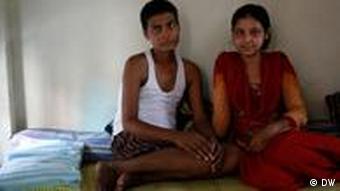 Latchma cannot work because of her TB

Kumar takes his medicine with some water, picks up his bag, thanks Shammo and makes his way to school. Several patients later, after passing over responsibility of dispensing medicine to the temple's priest, Shammo leaves to begin her daily visits, for patients who have missed their treatment.

Strolling down the dirt roads through the Tughlakabad slum, passing wandering cows and makeshift shops and markets, she is greeted with smiles and hellos.

Shammo stops at the house of five-year-old Sunita, who is one month into her treatment. She was looking forward to starting school this year but couldn't because of her TB. The family of seven lives in a small cramped hut without sanitation.

Next, Shammo visits 23-year-old Latchma who cannot work. She missed her appointment at the temple because she felt too ill to go.

Shammo's days are long but she knows that her work is vital and is glad to help India's many TB patients.

'Women are more willing to alter their behavior'

Do men have a larger carbon footprint? Are women more eco-conscious? And why does gender and global warming matter? GLOBAL IDEAS spoke to Ulrike Röhr, an expert on gender issues and climate change. (03.04.2012)

Rome to Rio: The complex path to sustainability

When poor nations become richer, their appetite for natural resources grows. Sustainability experts say policymakers meeting in Rio de Janiero this year need to think about just how much growth Earth can support. (10.02.2012)

Kitchens ordering food, washing machines turning on when energy demand on the grid is lowest, cars calling emergency services after an accident - all that could be part of an "Internet of Things." (26.04.2012)