India's democracy threatened from within

With 1.2 billion people, India takes pride in being the world's largest democracy. But 66 years after independence from Britain, various elements threaten the unity of the nation. 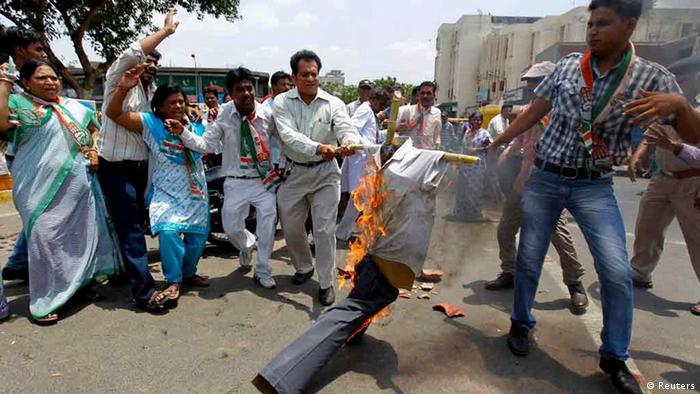 In March 2013, several high-ranking politicians from the ruling Congress Party in the central state of Chhattisgarh were ambushed by a group of Maoist rebels while returning from a campaign event. Despite police protection, 27 politicians were killed and many others seriously injured in the ensuing gunfight. The incident evoked memories of a massacre that had taken place three years earlier in that same state, when Maoists killed more than 70 police officers in a meticulously planned commando operation.

India's Prime Minister Manmohan Singh regards the Maoist rebels, who conduct operations in nine states, as the biggest threat to internal security. The insurgents have established strongholds in Chhattisgarh, in the eastern states of Jharkhand and West Bengal and in the southern state of Andhra Pradesh. According to government figures, the Maoists have some 20,000 armed fighters at their disposal as well as around 50,000 followers willing to resort to violence. 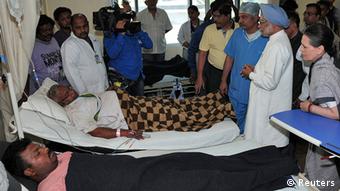 Non-governmental organizations estimate that more than 10,000 people have been killed in attacks launched by the group over the past 40 years. The rebels claim they have been fighting for justice for the poor and disenfranchised, in particular for the so-called untouchables and the country's indigenous inhabitants. The Maoist militants are especially active in India's economically less-developed regions where a large part of the population seems to sympathize with their cause.

New Delhi-based sociologist Yogendra Yadav says he is concerned that people in India feel they are not being taken seriously by politicians. He argues that many decisions taken at the highest level don't make any sense to the common people because they are not related to their everyday lives.

India's finance minister has presented the much anticipated budget. Spending focuses on education, health and infrastructure, while outlays for the military are being reduced. (01.03.2013)

Six men abused and raped a female student in India. Their victim is now dead. The unbelievable brutality of the attack has unleashed a nation-wide debate. But that's not enough, says ARD correspondent Sandra Petersmann. (29.12.2012)

"They feel that nobody understands their hardship," Yadav said. Despite the appeal of its megacities, more than two-thirds of India's population still lives in the countryside.

Experts such as Yadav are of the opinion that Indian politics are partly to blame for the frequent attacks and riots. With its 1.2 billion people the South Asian nation is a melting pot of cultures, ethnicities and religions. And most of the large parties use this diversity, especially ahead of elections, to mobilize certain groups.

For instance, Shakeel Ahmad, general secretary of the Congress Party, caused a stir in July when he basically blamed Hindu violence against Muslims in riots in Gujarat over a decade ago for the growth in strength of the militant Indian Mujahideen.

In 2002, 58 Hindu pilgrims burned to death after their train was attacked by Muslim extremists. The incident triggered a violent backlash that led to the deaths of an estimated 2000 people, most of whom were Muslims. The Indian Mujahideen made their first appearance in 2007 and have since been blamed for launching 10 attacks on touristic and religious sites. The Congress Party reprimanded Ahmad and made clear that it doesn't accept any kind of sympathy towards terrorist groups regardless of whether they are motivated by religious or ethnic differences. 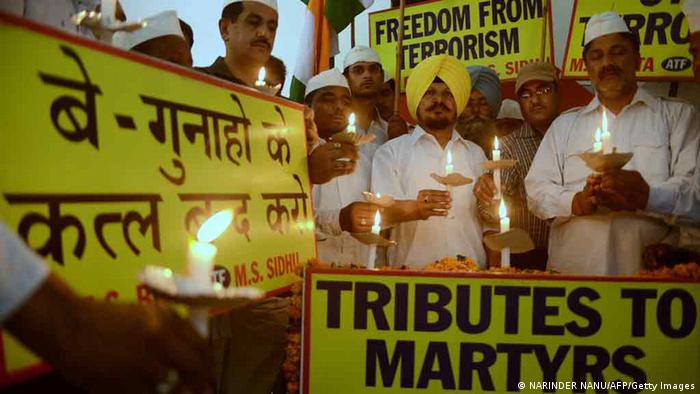 Corruption and bureaucracy are considered further evils that have rocked the public's trust in Indian democracy. In the 1980's, former Prime Minister Rajiv Gandhi said that for every rupee spent by the central government on development, only 10 percent actually reaches the poor. Recent corruption scandals such as the ones surrounding the Commonwealth Games in 2010 and scams involving mobile phone operating licenses - the so-called 2G scam - along with illegal coal mining contracts have even involved ministers.

"The problem is that corruption has become deeply entrenched in the people's psyche. They believe that they can't achieve anything without having to bribe people," former Home Secretary Madhukar Gupta told DW.

The high level of corruption in India led to a large number of people supporting Anna Hazare, a civil rights activist who in 2011 organized mass rallies demanding more transparency from the government. 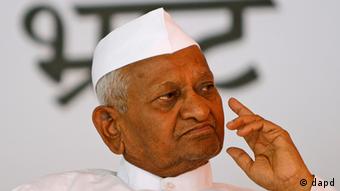 Anna Hazare made headlines with his call for more transparency

Gupta criticized the slackness of the political system which, in his view, hampers the introduction of badly needed reforms. Furthermore, the expert adds the two major national parties, the ruling Congress Party and the main opposition Bharatiya Janata Party (BJP), depend on the support of regional coalition partners. Still, Gupta is optimistic: "Today, in Indian politics, everyone looks to maintain his or her position. Even with such a system in place, I still believe good ideas and decisions can be implemented.

According to Yadav, India must create more transparency. The expert calls for reform from within the political system. "In order to introduce alternative policies and change the rules of politics, one has to play the game and win elections."

But Gupta has a different suggestion: to improve people's living conditions and thus strengthen the political system. He says what's important is that more people have access to education and technological development, especially in places where there is still no power or running water.