An encephalitis outbreak in India's Bihar state has killed more than 150 children so far. Public anger over the crisis has been growing, with both the state and federal government accused of "negligence and inaction." 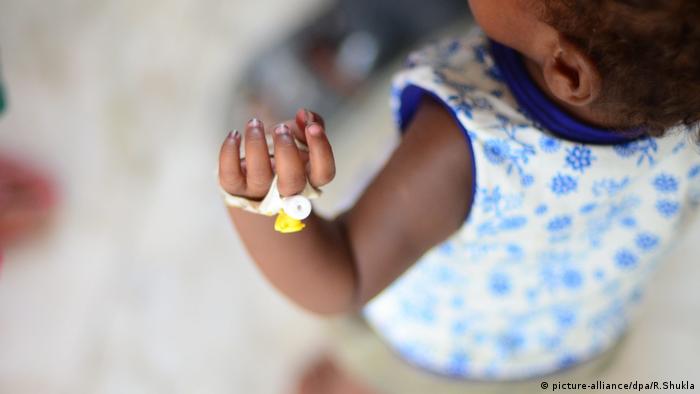 India's Supreme Court ordered an investigation on Monday into an ongoing encephalitis outbreak in the eastern state of Bihar which has killed at least 152 children so far.

Expressing concern over the deaths, the country's top court ordered state and federal authorities to explain what measures they have taken to combat the spread of Acute Encephalitis Syndrome, also known as "brain fever."

Health officials have come under fire for their lack of response to the outbreak.

"The deaths of children are a direct result of negligence and inaction" on part of authorities, said Manohar Pratap, an activist lawyer who petitioned the court.

Authorities now have seven days to send information about medical facilities, sanitation, nutrition and hygiene conditions in the state.

Over 700 cases of encephalitis have been registered in Bihar state since the outbreak began at the beginning of June.

Lawyers representing the state government said on Monday that they believe the outbreak is showing signs of slowing down and that officials will have it under control.

Young children are especially vulnerable to the illness, which can cause fever, vomiting and swelling of the brain. Some patients in Bihar state have been sharing beds in overcrowded hospitals with too few doctors.

A similar outbreak in 2014 killed 350 children. State authorities have been sharply criticized for not doing enough at the time to prevent future outbreaks.

On Monday, India's Health Ministry repeated a promise it made in 2014 to open a 100-bed children's ward in Muzaffarpur district, which is one of the hardest-hit areas.

Bihar state is one of the poorest regions in India, with some of the worst child health statistics anywhere in the world.

Medical experts have said that the encephalitis deaths could be avoided if people had better access to health care, nourishment and better awareness.

The contagious disease — a major concern — has infected a student. The virus killed 17 people across southern India last year. (04.06.2019)

Nipah virus outbreak in India: What you need to know

The Nipah virus has already claimed 10 lives in the Indian state of Kerala, including a 31 year-old nurse who was treating the infected. DW answers some questions about the deadly disease. (22.05.2018)

The death may mark the fourth monkeypox-related fatality since the outbreak began in May. The cause of the death is still being investigated.

The death of a 12-year-old boy has put authorities in the Indian state of Kerala on high alert to contain the Nipah virus. The mortality rate is up to 75%, making it far deadlier than the coronavirus.

A residential building in the German city of Dresden has been placed under quarantine after one of the residents died following his return from India. Follow DW for the latest.