Enthusiasts around the world have marked the first International Yoga Day. In India, the likely birthplace of the ancient practice, Prime Minister Narendra Modi led a mass outdoor session in the capital. 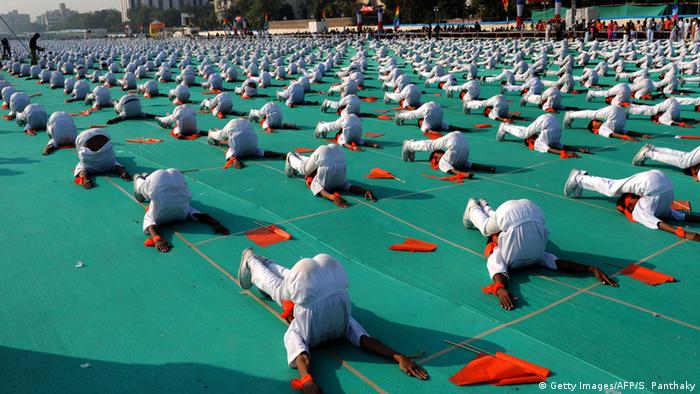 "We are not only celebrating a day, but we are training the human mind to begin a new era of peace and harmony," he said.

"This is a program for the benefit of mankind, for a tension-free world and to spread the message of harmony," he added, before himself laying down his mat and performing a series of postures with the crowd.

The session was concluded with meditation and a prayer for peace.

Organizers of the event were hoping that the event would be accepted by the Guinness Book of Records as the largest yoga class at a single venue.

The United Nations in November last year accepted a proposal by India that June 21 be named the international day of yoga.

Around 200 countries around the world were expected to host yoga events on Sunday. Many of these are being sponsored by Indian missions across the world.

Modi himself, a vegetarian who practices yoga daily, credits the discipline with allowing him to work long hours on little sleep.

Indian scholars believe that yoga dates back 5,000 years, and many enthusiasts believe it is the best way to calm the mind and exercise the body.

However, Modi's promotion of the art in India has caused controversy in some quarters, with many Muslims objecting that yoga is a Hindu practice and that Yoga Day is part of a campaign by Hindu groups to boost their religion.

In response to criticism, the government dropped the "sun salutation" exercise, which some Muslims feel implies that the sun is a deity. The Hindu "om" sound that is often chanted during yoga exercises was also dropped.

How healthy is yoga?

Yoga is a boon to body, soul and mind. Originally developed in India, today yoga has fans all around the world. Yoga expert Anna Trökes describes how to practice yoga for optimal health benefits. (17.06.2015)

Stress-busting with yoga? Not in India

What can be controversial about stretching and doing breathing exercises? Plenty, it seems, as India's preparations for Yoga Day are marred by an unlikely row over the government's enthusiasm for the ancient discipline. (19.06.2015)