Authorities in India have begun evacuating villagers after efforts to clear a landslide in Nepal sparked fears of flash floods. The landslide early Saturday killed at least eight people and buried dozens of homes. 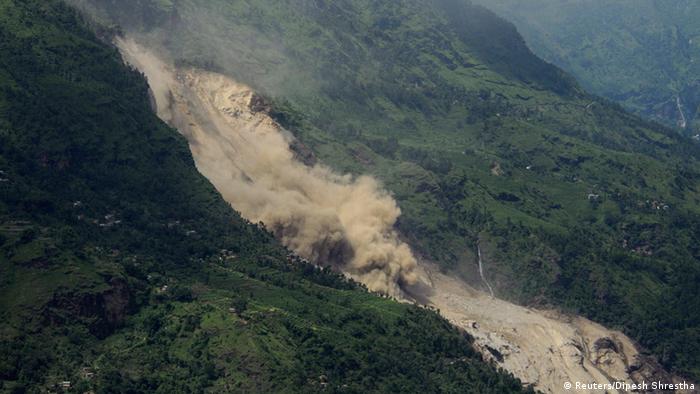 The landslide created a mud dam blocking the Sunkoshi river, which flows into India's Bihar state as the Kosi. Indian officials say water levels have risen above the danger mark and authorities fear that water could inundate hundreds of Bihar's villages as Nepal attempts to clears the debris.

"We are repeatedly appealing to villagers settled along the Kosi embankments to flee to safer places as soon as possible," Vysaji, the principal secretary in Bihar's disaster management department, told reporters late Saturday. "The blasting of blockage in river could result in a 10-meter (33-foot) high wall of water sweeping down Kosi into Bihar which could bring trouble," added Vysaji, who goes only by one name.

Nepal's army announced that it had started opening the dam by setting off two controlled blasts and that water had started to drain out slowly. Indian authorities, taking no chances, have put eight districts under flood alert, and begun evacuations in the districts of Supaul, Madhubani and Saharsa. Authorities have also opened sluice gates at a barrage along the Kosi at the border, deployed rescue teams and sent more than 200 boats to evacuate villagers.

The disaster preparations come just days after a landslide killed dozens of people in India.

The landslide hit early Saturday in Nepal, burying two dozen homes before dumping mud and stones into the river, northeast of the capital, Kathmandu. Officials have recovered eight bodies from the debris of dozens of collapsed houses so far, and police have warned that the death toll will likely rise.

At least 40 people were injured, four of them critically. More than 100 people remain missing, and at least 5,000 have been displaced.

"The landslide has caused huge damage," Bharat Bahadur Bohara, a police officer, told the news agency Reuters. "We cannot make any estimates of the number of deaths now. We are looking for other people who might be trapped."

Nepalese authorities have also asked residents in downstream villages to evacuate as the mud dam could collapse at any time.