India Blames Pakistan as Mumbai Siege Ends | News and current affairs from Germany and around the world | DW | 29.11.2008

Elite forces have killed the last of the terrorists in Mumbai's Taj hotel, ending the nearly 60-hour siege of the Indian metropolis. Meanwhile, Delhi has said Pakistani "elements" were responsible for the attacks. 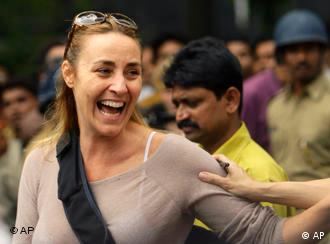 "The hotel is under our control," JK Dutt, chief of the National Security Guard commandos, said Saturday, Nov. 29, after fierce combat that began early in the morning and lasted nearly five hours.

Dutt added that the commandoes had killed three terrorists after an intense gun battle inside the hotel. One commando was killed during the assault in the 565-room hotel. Some 200 national security guards were involved in the operation.

Through Friday night, the terrorists engaged in intermittent battles. Dutt said terrorists had set fires at different places in the hotel as diversionary tactics whenever they found the forces closing in on them. 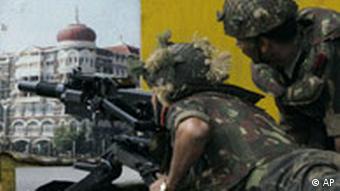 "There was a lot of shooting. Grenades were lobbed and explosives were used by terrorists," he said.

The security chief said operations would be declared over only after the conclusion of room-to-room searches to ensure that there were no remaining terrorists or live explosives inside the hotel.

"We are also looking for surviving guests who could have locked themselves in rooms and have not been coming out for fear of terrorists," he said.

In all, nearly 200 people have been killed since Wednesday night when a group of militants carried out a series of coordinated attacks in India's commercial capital. At least 22 of the dead were non-Indian national. Several hundred more people have been injured.

The terrorists reportedly targeted individuals carrying British and American passports. Five Americans and one British citizen have been reported among the foreign victims.

In addition to other sites, the gunmen had seized the Taj and the Oberoi-Trident, both five-star hotels, and a Jewish center in southern Mumbai.

The National Security Guard and military commandoes on Friday managed to end the siege at the Oberoi-Trident hotel and the Jewish center by killing two militants in each operation. 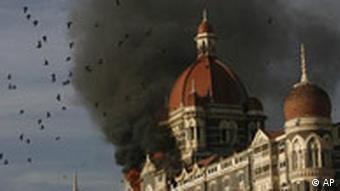 At least 30 bodies were found at the hotel, 20 of whom were massacred in one of the restaurants, officials said. Five hostages were murdered by militants at the Jewish center.

A previously unknown group calling itself the Decca Mujahedeen claimed responsibility for the attacks -- the worst in Mumbai since more than 180 people were killed in a series of bombings in 2006.

Indian security agencies have said they suspect that Pakistan-based militant groups like the Lashkar-e-Toiba had a hand in the carnage. On Friday, Delhi blamed "elements" in Pakistan for the attacks.

Kiran Nagarkar, a native of Mumbai and author of several novels, including "God's Little Soldier," spoke to DW about terrorism and the media's role in covering it in the wake of the two-day long siege on his hometown. (28.11.2008)

At least five Israeli hostages seized by Islamic militants were recovered Friday from a Jewish center in Mumbai after it was stormed by Indian commandos, an Israeli diplomat said. (28.11.2008)

As reports of European casualties in the Mumbai terrorist attack began to trickle in, top EU officials strongly condemned the "heinous" acts and vowed to coordinate aid for those Europeans caught up in the attack. (27.11.2008)