Macedonians are voting for president in a test for the ruling party ahead of general elections this month. The economy has dictated the campaign in the country, where more than 1 in 4 are unemployed. 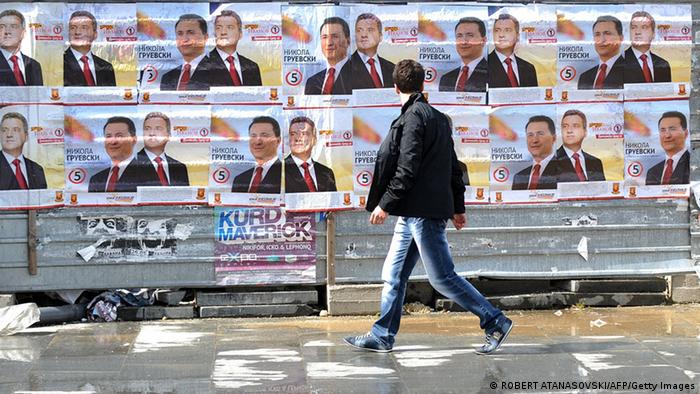 Until 7 p.m. local time (1700 UTC), 1.8 million Macedonians may vote for four candidates at more than 3,500 polls. Those standing for the largely ceremonial post include the one-term incumbent, Gjorge Ivanov, from the ruling conservative Internal Macedonian Revolutionary Organization-Democratic Party for Macedonian National Unity (VMRO-DPMNE).

The latest polls put Ivanov at about 30 percent of the vote, with his main rival, the Social Democrat-backed opposition candidate Stevo Pendarovski, trailing with 16 percent. Should no candidate surpass 50 percent in Sunday's first round, the top two will stand in a final runoff on April 27, the date of Macedonia‘s parliamentary elections.

Though the economy has dominated the campaign, the opposition has sought to shift focus to a dispute with Greece over Macedonia‘s name. Since the country declared independence in 1991, its neighbor has argued that the name implies a territorial claim over a northern Greek province and insists that it be called the Former Yugoslav Republic of Macedonia, or FYROM, despite a ruling by a UN court to the contrary.

This issue, the opposition argues, has hampered the country's economic and political future. The row has also stymied Macedonia's efforts to join both NATO and the EU, where it has held candidate status since 2005.

The opposition also forced the April 27 early parliamentary elections, accusing the ruling party of lagging behind with reforms. Still, surveys suggest that the ruling VMRO-DPMNE will win 59 of the 123 seats in parliament, with the opposition clinching 36.

The leader of the VMRO-DPMNE, Prime Minister Nikola Gruevski, has held power since 2011, aided by junior coalition partner, the ethnic Albanian Democratic Union for Integration.