Athens balks at UN ruling on Macedonia name dispute | Europe | News and current affairs from around the continent | DW | 06.12.2011

The International Court of Justice has decided in Macedonia's favor in a long-standing dispute over the country's name with Greece. But it remains unclear whether Athens will abide by the ruling of the UN court. 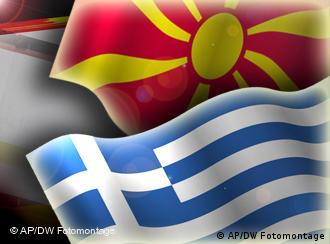 Athens sees Macedonia as a threat to its territorial integrity

It's a clear verdict - the United Nations' International Court of Justice has ruled 15-1 that Greece was wrong to have blocked Macedonia's 2008 bid to join NATO over a dispute over that country's name.

The court found that Greece was in violation of a 1995 agreement between the two countries in which Athens accepted that it would not block membership of international organizations as long as the country went under the name "The Former Yugoslav Republic of Macedonia," while the matter was submitted to UN mediation.

Yet the dispute remains unresolved. Greece so far has refused to accept this name - to the extent that even Macedonia's diplomatic missions aren't called "embassies" but merely liaison offices.

Since Macedonia became independent after the collapse of Yugoslavia in 1991, Athens has been blocking the country's efforts to become a member of both NATO and the European Union.

The reason is that Greece sees the name as historically inaccurate at best and a potential threat to its territorial integrity at worst, as Greece's northern region is also called Macedonia.

A threat to Greece? 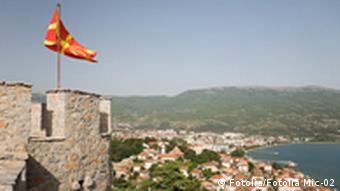 Macedonia has ambitions to join both NATO and the EU

It is an almost unique state of affairs, that a country tries to influence the name of a neighboring state. And for almost 50 years the then-Yugoslav province of Macedonia did not seem to bother Greece.

Since Macedonia's independence, some 130 states have recognized the country as the "Republic of Macedonia" - among them the US, China and Russia.

It's difficult to see how its small neighbor with only about 2 million people could be a threat to Greece. Macedonia's military consists of merely a few thousand soldiers. The country is economically weak - it's one of Europe's poorest countries and it is to a large extent dependant on Greek investors.

Also, the Macedonian constitution contains a clause that Skopje can never make any territorial claims against a neighboring country. Yet so far, none of that has been enough to soften Greece's hard stance on the issue.

Macedonia sees the verdict by the UN court as a strong confirmation of its position, but Skopje is cautious not to be too euphoric.

"This verdict will serve to give a positive impact so we can overcome the dispute over the name. It will end the blockade that we've been faced with," Prime Minister Nikola Gruevski said.

"But the verdict should not be seen in terms of winners and losers," he cautioned. "It is very important that the ties we have with our neighbor Greece are marked by respect, cooperation, trust and partnership." 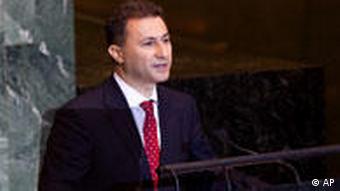 Nikola Gruevski is careful not to gloat

So far there's no indication on the Greek side that Athens is willing to surrender its position. In a written statement, the Greek Foreign Ministry said the ruling did not affect the heart of the problem.

For years, Athens has been demanding that its northern neighbor should include a clear geographic reference in the name such as "Republic of North Macedonia" or "Republic of Upper Macedonia."

At the same time there is public sentiment in Greece calling for Athens to simply withdraw from the 1995 deal. According to journalist Stavros Lygeros, the current economic crisis in Greece might actually work in Athens' favor.

"If national humiliation would be added to the economic crisis we already have, things really could boil over - this would be an explosion," Lygeros warned. "I think that both the Europeans and the US would intervene here and stop Skopje in its tracks"

Official reactions from the EU and Germany have been rather low-key. The EU commission merely said that it would take note of the decision of the UN court, and called on both sides to continue the UN-mediated negotiations.

The German Foreign Ministry said it hoped the decision would give a fresh impulse to the talks between Athens and Skopje.

The chair of Germany's parliamentary committee on EU affairs, Günther Krichbaum, however was more outspoken in his reaction. The ruling brought "legal clarity" and "shows that the dispute can not be accepted as a reason for Greece blocking Macedonia's international ambitions."

The UN court ruling will have very little consequences on the ground. Athens looks likely to stick to its position, insisting that NATO membership for Macedonia can only be possible once the dispute over the name is settled.

Macedonia's ruling conservative coalition has emerged as the winner of snap elections. The ballot passed off peacefully, despite warnings of possible election-day violence and bitter political campaigning. (06.06.2011)

The European Union should review Serbia's application to join the bloc as soon as possible, says the Spanish EU presidency. The foreign ministers of Greece and Austria have also proposed changes in EU-Balkan ties. (27.01.2010)

The European Union has deferred a decision on when to start accession talks with Macedonia. The stumbling block is Greek opposition to the former Yugoslav republic's name. (08.12.2009)