Increased attacks on Iraqi gays raise concerns over militia violence | World | Breaking news and perspectives from around the globe | DW | 17.08.2009

A Human Rights Watch report published Monday shows an increase in attacks on and murders of homosexual men in Iraq. The attacks have been blamed on radical militia and raise concerns over their expanding power. 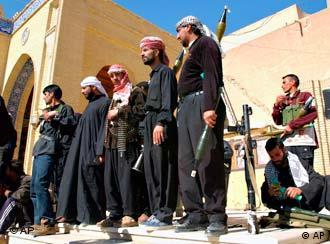 The attacks raise fears of the increasing power of militias

With US involvement scaling down and most of the "Coalition of the Willing" now departed, Iraq's government inches closer each month to full responsibility for the country's security, judiciary and public services.

But as the Western forces, which invaded the country to overthrow Saddam Hussein and his cronies, prepare to leave Iraq to its destiny as a fully sovereign state, there are growing concerns that the country could return to its pre-invasion brutality under a new militant power: the militias.

One of the most disturbing trends which point toward a creeping radicalism and the increased power of Iraq's militias has been highlighted in a new report by Human Rights Watch (HRW), published on Monday. According to the New York-based rights group, Iraqi militias are increasingly torturing and executing men suspected of homosexuality but the authorities in Baghdad are doing nothing to stop the violence.

The HRW report details brutal torture of gays in Iraq

The HRW report states that hundreds of men have been kidnapped, tortured and killed this year in a wave of violence that began in the Baghdad Sadr City stronghold of Shiite cleric Moqtada al-Sadr's Mahdi army militia. Many bodies have been found with the Arabic words for "pervert" and "puppy" - considered derogatory terms for homosexuals in Iraq - written on their chests.

The report, released in Lebanon and entitled "'They want us exterminated: Murder, Torture, Sexual Orientation and Gender in Iraq'," says it is almost impossible to calculate how many men were killed, but estimates the figure to be in the hundreds.

"Unfortunately it's not surprising that we're hearing about these disgusting acts as reported by HRW as well as witnessing the current spate of bombings in Iraq," Richard Gowan, a Middle East policy expert at the European Council for Foreign Relations and author of various papers on Iraq's struggle for democracy, told Deutsche Welle.

"The country is in danger of becoming ever more fractious as the withdrawal of US forces gets closer. We've seen this in crisis zones around the world. When the occupying or peacekeeping forces pull out, there is an escalation of violence within the vacuum."

"What we are seeing with these killings and bombings is the real power of the militias," Gowan added. "At the height of the insurgency in 2006, the militias showed that they could give the US forces and the Iraqi government a good run for their money. Things have changed and the Iraqis are now better-equipped and trained but, as the HRW report shows, the militias can still act with impunity." 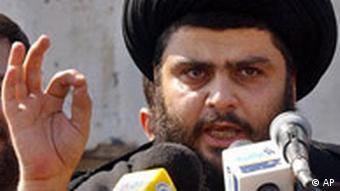 Many murders have taken place in al-Sadr's stronghold

Mahdi army spokesmen have suggested that military action was the remedy for the "feminization" of Iraq men, according to the report in which survivors are quoted as saying militiamen invade homes and interrogate victims before killing them in order to identify other potential victims.

HRW said Iraqi doctors and morgue employees also have records of grotesque torture marks on the bodies of men, including mutilation and even anuses glued shut.

Motives for the murders include "fears that Iraqi men's masculinity is under threat," HRW reported.

The report said men have fled to neighboring countries, despite consensual homosexual activity being illegal in states in the region such as Egypt, Jordan and Lebanon, even though it is not a criminal offence under Iraqi law.

It also said some of the murders were so-called honor killings, carried out by victims' family members "because 'unmanly' behavior threatens the reputation of the family or tribe."

Some Iraqis interviewed by the rights group charged that, in some cases, members of the security forces had colluded and even joined in the killing.

"At some point during the insurgency, the government came to some agreement for an uneasy peace with the militias where the authorities maintained a certain amount of control and loyalty through bribery and the fact that they would let the militias do what they wanted," Gowan said. "The HRW report shows that there is a real concern as to what effect this is having on Iraqi society, where militias are allowed to brutalize their own communities while the government turns a blind eye."

"What the HRW report reminds us (of) is that the US strategy of creating a balancing act between the militias comes with its own set of problems," he added. "This idea of supporting some militias and not others has been underpinning security policy in Iraq for a couple of years now. The primary concern is that, when the Americans leave, the balancing act will fail and we'll see a fragmented Iraq and a real threat of civil war."

Government accused of turning a blind eye - and worse 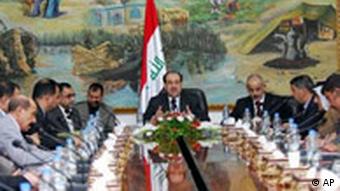 Is the Iraqi government somehow involved?

Scott Long, director of HRW's Lesbian, Gay, Bisexual, and Transgender Rights Program, laid a fair portion of the blame directly at the Iraqi government's feet, accusing it of abandoning the people.

"Iraq's leaders are supposed to defend all Iraqis, not abandon them to armed agents of hate," he said. "Turning a blind eye to torture and murder threatens the rights and life of every Iraqi."

Richard Gowan believes that Iraqis themselves could do much to put pressure on the government to clamp down on the killings and the rise of the militias by pointing out the effects such activities could have on external investment.

"The strong media in Iraq and the affluent middle class who want to be secure will put pressure on the government if things get further out of hand," Gowan said. "The many European nations and leaders who have shown an interest in investing in Iraq have shown that the country has huge potential and any further scandals and shocks like we've seen in the HRW report will want to be avoided," he added.

"That said, everyone with an interest in making money from Iraq, both internal and external powers, will want to ignore reports like the HRW paper so as to avoid the embarrassing questions about the real state of Iraq's security and the failures of the western powers."

DW-WORLD.DE spoke with Middle East expert Kamal Sido about the fate of the Christian minority in Iraq after EU ministers this week dropped calls to take in more Iraqi refugees. (26.07.2008)

British troops withdrew from their Basra Palace base for the relative safety of their main compound outside the city Monday. Defense experts predict chaos and strained relations with the US once they leave Iraq for good. (03.09.2007)

The kidnapping of a successful Iraqi party organizer suggests the government is powerless against militias that have become a law unto themselves. The dreams of Iraq's youth are falling victim to their growing influence.

After over 30 murders of pro-democracy activists in Iraq, one suspect has finally been arrested. But thousands of activists continue to live in fear.