March 1 marks World Compliment Day. Compliments, however, mean various things around the world. What is a compliment for some, could be an insult for others.

Compliments from around the world

"A compliment is like a kiss through a veil," wrote French author Victor Hugo in his novel "Les Misérables." But sometimes, good intentions can be misinterpreted. Things can get particularly troublesome in an intercultural setting: Misunderstandings can sprout quickly and a well-intended statement can be taken the wrong way.

The differences in the culture of complimenting are vastly different, for instance, between the East and the West. The Japanese are a notably reserved group of people, so compliments are rarely given. But they are known to be very polite to foreigners, showing respect by complimenting non-locals on their foreign language skills. The person receiving the praise, however, is expected to be modest; otherwise, one appears arrogant.

However, it is a huge deal when a Japanese man pays a woman a compliment. It may sound funny to Westerners, but one flattering phrase can be: "You have a small face." Actually, head size is not at issue here, but delicate, well-proportioned facial features. A beauty ideal! What is beautiful? It's different all over the world

Women in Japan can also be pleased when told their face is pale and their nose is big. The noble pallor is perhaps understandable, but a big nose? Well, it makes the rest of the face appear smaller!

People in Cameroon like using metaphors to express their praise. A person, for instance, could be said to be an "old pot" ("vielle marmite"). That's not an insult, but praise for someone's cooking skills since people there consider old pots to churn out the best food. When you're called a "baobab," after the monumentally sized tree, it means you've done good work and are respected.

A similar note of respect can be heard in Brazil when someone is called an "old ape" ("macaco velho"). That's based on the old saying, "A wise, old ape does not put his hand in the pot." In Brazil, apes like to eat from the pot-shaped fruits of a tree. A young ape will place his hand in the fruit pot — but can get it caught when he keeps his fist closed. 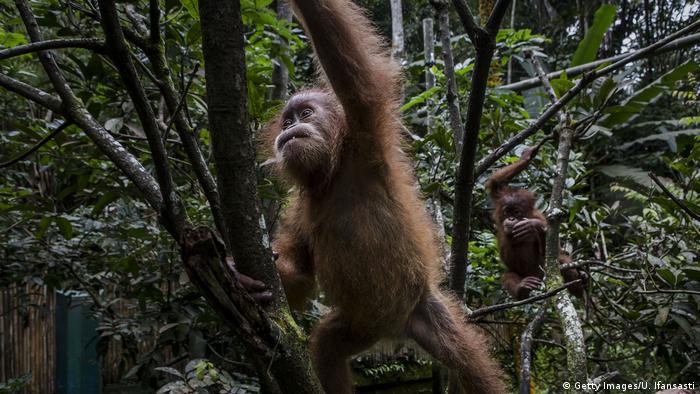 In Brazil, being an "old ape," as opposed to a young one, is a good thing

People in India also drum up considerable imagination when paying compliments. In Hindi, someone might say "Gaja Gamini" ("she walks like an elephant") to a woman passing by. People in India, after all, don't consider the animals to be clumsy lumps, but as slow, graceful walkers. The metaphor has even sparked imagination in Bollywood, which produced a film of the same name in which famous actress Madhuri Dixit plays a seductive "Gaja Gamini."

In the region where Bengali is spoken, which includes parts of India and Bangladesh, people like to say to a woman that she is a "Dana Kata Pori" — "a fairy without wings." It's meant nicely, of course: more like an angel dropped down from heaven. In other words, the woman is beautiful.

People in Russia are also quite creative when it comes to compliments. If you are told you're as fit as a cucumber ("Огурчик"), then it means you look alive and fresh. "Blood with milk" ("Кровь с молоком") is similarly flattering: it means you have rosy cheeks and are full of strength.

Even if you miss the mark when paying a compliment, it doesn't mean you shouldn't do it. After all, nothing makes us happier than honest praise, say the initiators of World Compliment Day. And, in contrast to Mother's Day and Valentine's Day, there are no commercial intentions behind it. Paying a compliment requires nothing more than a little courage.

The absence of criticism can be taken as praise in Germany, Courtney Tenz learned the hard way. On World Compliment Day she explains why she misses "superficial" American compliments, but appreciates the German approach. (01.03.2017)

Power to the monsters: Why Halloween is a psychological ritual for kids and adults

Think Halloween is all harmless fun, tricks and treats? Wrong. It's a social ritual, a power struggle between adults and the young, and with killer clowns on the loose this year, things may just get real. (31.10.2016)

Compliments from around the world