US President Trump has named Scott Garrett, a conservative Republican former lawmaker, to head the Export-Import (Ex-Im) Bank. Garrett voted to close the official US export credit agency when he was a member of Congress. 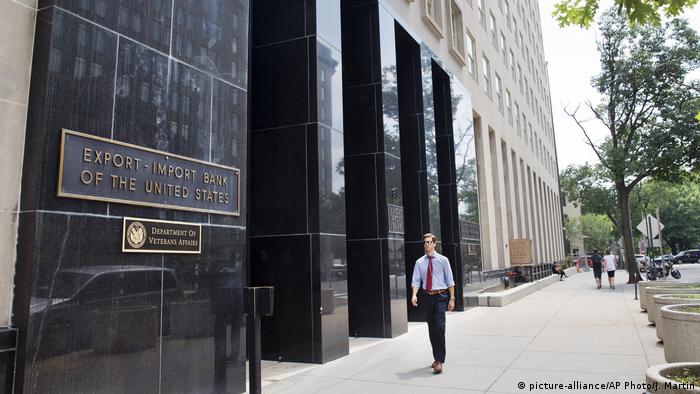 After describing the Ex-Im bank, which guarantees loans for companies that export US products, as "featherbedding" for politicians and wealthy corporations such as Boeing, President Trump has nominated a conservative former Republican lawmaker as its next president.

Scott Garrett, a New Jersey Republican, served seven terms in the House of Representatives and voted in 2012 and 2015 against renewing the Ex-Im charter. A founding member of the Freedom Caucus and reported to have made a series of anti-gay remarks, Garrett was defeated in the November elections.

Speaking about Ex-Im at a congressional hearing in 2014, Garrett said "when you mix big corporations and taxpayer-backed guarantees, you get a little something that looks an awful like crony capitalism." In a tweet in October 2015, Garrett described the bank as a "corporate welfare program."

In a White House statement on Friday, Trump also named Spencer Bachus, a Republican former congressman from Alabama, to be a member of the Ex-Im board of directors.

Both men were named for four-year terms and have to receive approval from the Senate.

During last year's presidential election campaign, Trump dismissed the bank as "unnecessary." He alleged in August that "it's sort of a featherbedding for politicians and others, and a few companies."

Boeing is among the bank's largest beneficiaries and has used its credit facilities in selling jets to India, Poland and other countries. The bank's critics have called it "the bank of Boeing" because of the extent of support it has received over the years.

Trump met with former Boeing Chief Executive Jim McNerney on Tuesday, according to Reuters. McNerney left the company last year but was at the forefront of Boeing's lobbying effort in support of the bank in 2015.

On Wednesday, in comments reported by the Wall Street Journal, Trump announced a policy change on Ex-Im, saying: "Actually, it's a very good thing. And it actually makes money, it could make a lot of money."

From closure to credit

Conservatives in Congress, including Garrett, campaigned to close Ex-Im in 2015, which led to the bank's charter expiring for five months. After bipartisan support for a renewal of the bank's charter, conservatives then blocked nominees to the board. This prevented it from financing the large exports for companies such as Boeing's aircraft and General Electric's power turbines.

Trump's previous refusal to name candidates for the two vacancies on the bank's five-member board has prevented it from having a quorum and being able to act on loans over $10 million (9.4 million euros).

Ex-Im's former president, Fred Hochberg, was a campaign fundraiser for President Barack Obama. As head of the bank, Hochberg was the most senior openly gay member of the Obama administration.

The bank currently has about $30 billion in deals waiting to be authorized.

The costs of Air Force One