In New York City, the Occupy movement takes on local causes | Environment| All topics from climate change to conservation | DW | 03.12.2011

As questions grow about where the Occupy movement is headed, in New York City, where it all began, attention is turning to local issues. Protesters have demanded that police put an end to their stop-and-frisk policy. 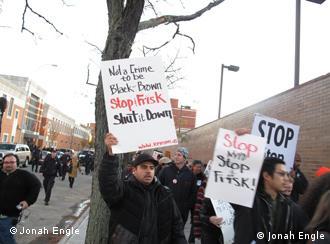 The Occupy protesters inspired others to take to the streets

As winter sets in and cities across North America clear Occupy protesters from their camps, many wonder what lies ahead for a movement without a geographic base, leaders or concrete demands.

If New York City, where the Occupy movement began, is any indication, part of that future may lie in new grassroots coalitions organizing around specific and local social justice issues that connect with the overarching cause of the movement, a more egalitarian society.

Since October, an eclectic mix of young and old, black, white and Latino protesters have been "occupying" the entrances of police precincts in Manhattan, Brooklyn and Queens.

Their demand: an end to the New York Police Department's stop-and-frisk policy.

By law, if a police officer has reasonable suspicion that someone has committed a crime or is about to, that officer can stop the person and question them. If the officer suspects that person is carrying a weapon, the officer can also frisk them. 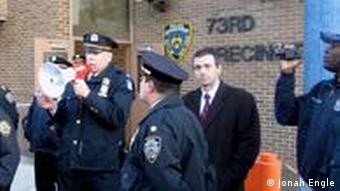 Protesters have marched near the entrances of police precincts

But the policy has been coming under growing scrutiny as the number of stops has risen steadily, from fewer than 100,000 in 2002 to more than 600,000 last year. Nearly 85 percent of those stopped have been black or Latino, despite the fact that they make up 52 percent of the city's population.

The police department declined to be interviewed, but it has argued that the practice is an essential public security tool that takes guns off the street and has contributed to reducing crime in New York City. It rejects charges of racial profiling, arguing that stops are concentrated in some predominantly black and Latino neighborhoods because police are concentrating their efforts where crime rates are higher.

The policy is controversial. It is the leading cause of complaints against the police. Eric Adams, state senator and a former police captain, as well as Manhattan Borough President Scott Stringer, have called for an investigation by the Justice Department into the policy. In 2008, the Center for Constitutional Rights filed a federal class action lawsuit against the New York Police Department (NYPD). But until this fall, there had been no concerted protests against the policy.

On October 21, protesters locked arms in a peaceful protest in front of the 28th Precinct in Harlem. Around 30 people were arrested, among them, media figure and Princeton University professor Cornel West. 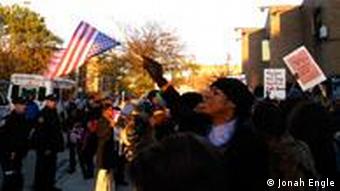 Ten days later, around 125 protesters marched to Fort Plaza in Brownsville, Brooklyn where the 73rd Precinct sits between Brooklyn's Youth Prison and one of the many housing projects that spread across the neighborhood.

The diversity of the protesters stood out in a neighborhood that is 95 percent black and Latino. White college kids who had never been stopped demonstrated alongside young black men and women from Brownsville, like Sherrod Hays. He said he'd followed Occupy Wall Street on TV, but spending the night in a tent wasn't for him. Protesting stop and frisk was long overdue, he said. "Every day we're getting stopped."

The hallmarks of the Occupy movement were everywhere, from invocations of the 99 percent, to the use of the "human microphone" in which protesters repeat what a speaker is saying to amplify the message.

The campaign "gets a lot of energy from Occupy Wall Street," said Debra Sweet, executive director of the World Can't Wait movement. "It is absolutely out there to support the rights of the 99 percent which almost never connect. Brownsville, Brooklyn would almost never connect with the white middle class banker protester," said Sweet.

Drawing on the past 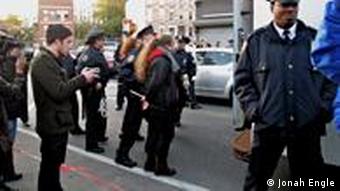 Protesters have vowed to continue their campaign of civil disobedience

But the protesters are also drawing on an earlier mass movement which, like the stop-and-frisk protests, was concerned with racial justice; the civil rights protests of the 1960s. It is echoed in their chants, "stop-and-frisk has got to go, we say no to the New Jim Crow," referring to the system of legal segregation in the American South defeated by the civil rights movement.

It's evident in their tactics of non-violent civil disobedience, and is also explicit in the way the protesters describe themselves as a "new generation of freedom riders."

Dan Craig, a pastor at Brownsville's Mount Zion Baptist Church, remembers the civil rights movement. He grew up in Selma, Alabama where Martin Luther King Jr. led a historic march to Montgomery for voting rights. But when the protesters showed up, he was standing with a group of neighborhood clergy in support of the police.

For their part, protesters are vowing to pursue their campaign of civil disobedience until the NYPD stops its policy of widespread stops.

The number of those stops is on track to top 700,000 this year, setting a new record for the fourth year in a row.

Thousands of people in Germany have rallied again to protest over the gap between rich and poor. Activists camping outside the European Central Bank in Frankfurt have vowed to remain for the next two weeks. (30.10.2011)

Taking a cue from the 'Occupy Wall Street' and 'indignant' protest movements, demonstrators have taken to Europe's streets, expressing their anger over rising inequality and government austerity measures. (15.10.2011)

Anti-Wall Street movement protests gather pace across the US

Without a common agenda or leader, demonstrators in Washington have made clear that they no longer want to foot the bill for the rich. A movement that began on Wall Street has now spread to cities across America. (07.10.2011)