In his own words: Why Mesut Özil quit Germany

In quitting the national team, Mesut Özil attacked the German Football Association (DFB), its President Reinhard Grindel, and double standards in Germany's media and society. Here are the key quotes from his statements. 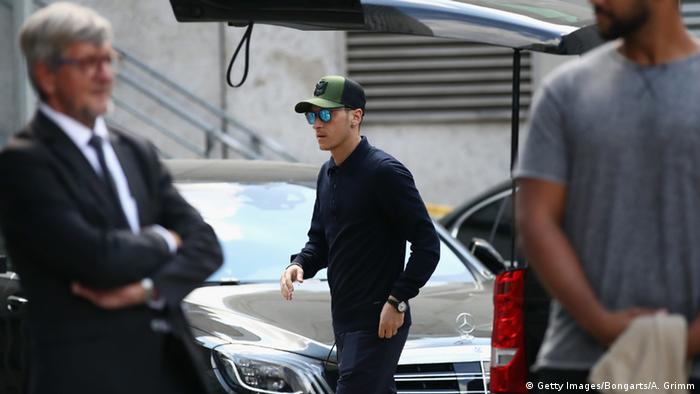 Özil on the DFB and its President Reinhard Grindel

— "Whilst I attempted to explain to Grindel my heritage, ancestry and therefore reasoning behind the photo, he was far more interested in speaking about his own political views and belittling my opinion."

— "I will no longer stand for being a scapegoat for [Grindel's] incompetence and ability to do his job properly. I know that he wanted me out of the team after the picture, and publicized his view on Twitter without any thinking or consultation, but Joachim Löw and Oliver Bierhoff stood up for me and backed me."

Özil on racism and xenophobia:

— "In the eyes of Grindel and his supporters, I am German when we win, but I am an immigrant when we lose. This is because despite paying taxes in Germany, donating facilities to German schools and winning the World Cup with Germany in 2014, I am still not accepted into society. I am treated as being 'different'."

— "Are there criteria for being fully German that I do not fit? My friends Lukas Podolski and Miroslav Klose are never referred to as German-Polish, so why am I German-Turkish?"

— "I was born and educated in Germany, so why don't people accept that I am German?"

Özil on double standards in the German press:

— "What I can't accept are German media outlets repeatedly blaming my dual-heritage and a simple picture for a bad World Cup on behalf of an entire squad."

— "Certain German newspapers are using my background and photo with President Erdogan as right-wing propaganda to further their political cause. Why else did they use pictures and headlines with my name as a direct explanation for defeat in Russia?"

— "What I also find disappointing are the double standards that the media has. Lothar Matthaus met with another world leader a few days back and received almost no media criticism."

— "I'm aware that the picture of us caused a huge response in the German media, and whilst some people may accuse me of lying or being deceitful, the picture we took had no political intentions.

— "For me, having a picture with President Erdogan wasn't about politics or elections, it was about me respecting the highest office of my family's country. My job is a football player and not a politician, and our meeting was not an endorsement of any policies.

— "Although the German media have portrayed something different, the truth is that not meeting with the President would have been disrespecting the roots of my ancestors."