Impact of the Fake Hitler Diaries Press Scandal 25 Years Later | Germany | News and in-depth reporting from Berlin and beyond | DW | 25.04.2008

"Stern" magazine's discovery of the Hitler diaries a quarter-century ago was a media sensation -- and a spectacular hoax. Insiders illuminate the pitfalls of publishers influencing editorial policy. 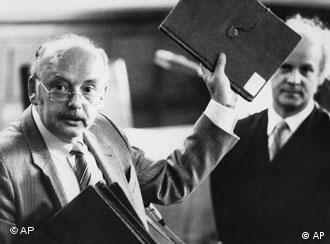 "All the ingredients for a programmed catastrophe were there from Day One," said Michael Seufert, author of the newly released book "The Scandal Surrounding the Hitler Diaries."

Seufert was Stern's domestic editor on April 25, 1983 when the weekly newsmagazine publicized its sensational scoop: 62 volumes of Adolf Hitler's journal entries from 1932 to 1945 bound in black imitation leather had been unearthed.

The fanfare over the Stern exclusive was, however, short-lived. Two weeks later, the diaries were exposed as complete forgeries. It had turned out that Stern's source in obtaining the alleged diaries was a con artist and petty thief named Konrad Kujau, who made a small fortune in fabricating and selling old Nazi memorabilia.

Kujau found a taker for his forgeries in Stern reporter Gerd Heidemann, and that's where the disaster began, according to Seufert.

"Heidemann had such a morbid fascination with Nazi collectibles that he even wound up befriending war criminals and was ready to believe in anything," Seufert said. 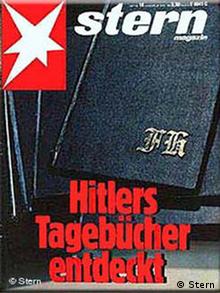 Stern billed the diaries as the scoop of the century

If Heidemann's gullibility were the only issue, the fake Hitler diaries would have never seen the light of day. The downfall was that the top brass at Stern's publisher, Gruener + Jahr, had also been blind-sided and were so eager for an exclusive scoop that they not only forked over a colossal sum in cash to obtain the diaries, but had even guaranteed that only Heidemann and one other editor could review its contents.

The project was shrouded in secrecy in order to protect alleged sources in the former East Germany dictatorship, according to Seufert, who described the collusion of reporter and publisher with a counterfeiter and the Cold War as a backdrop, as fatal.

"We editors were completely kept out of the loop, so all the normal checks and balances to authenticate stories were brushed aside," said Seufert, who confirmed that the publishing house had paid out 9.34 million DM (worth more than $4 million at the time) altogether to Heidemann and Kujau. Both had served over four years of prison time each on fraud charges, while Stern's two top editors had resigned.

Since most of the key players in the whole saga, including Kujau, are either dead now or refuse to discuss the scandal publicly, corroborating Seufert's version of the events is difficult.

However Magnus Linklater, who had been features editor of the Sunday Times of London, which had serial rights to publish extracts of the diaries in English, shared Seufert's frustrations at the time. Linklater had smelled a rat when he read the material. 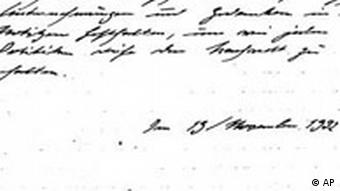 Handwriting experts had not been allowed to examine diaries

"But the deal was that Rupert Murdoch, whose company owns the Times, bought the diaries from Stern, and the condition of purchase was that we were not allowed to conduct our own independent investigation," Linklater added. "This was a clear case of the editorial and business side of newspapers clashing. We had to take the pig in a poke so to say."

Before publication, Linklater did however talk to the eminent Hitler historian Hugh Trevor-Roper, who assured him the diaries were genuine.

"His word was good enough for me, but it goes to show how gullible we can all be," Linklater said. "The point is if you are offered a scoop, you can keep it secret, but that doesn't mean you can't do internal checks."

As it turned out, the Hitler documents were so technically flawed that forensic experts were able to easily determine that the paper, ink and glue that held the book bindings together were manufactured with post-war materials. Even Hitler's handwriting had not been subject to analysis.

Importance of internal checks and controls

"You need outside experts to look at the handwriting or paper, so it is understandable that Stern, which was so paranoid about secrecy, was afraid of leaks," said Gerhard Weinberg, a World War II historian, whom Newsweek had hired as a consultant to examine the authenticity of the diaries. "But what is unfathomable is why they did no internal checks. 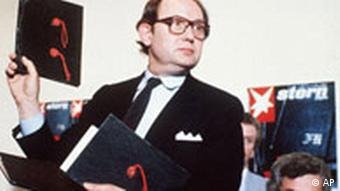 Stern reporter Gerd Heidemann was obsessed by Nazi collectibles, such as fake diaries

Weinberg pointed out that the diaries were full of mistakes that would have been recognized had Stern allowed experts to examine even typed versions of the diaries.

"Someone in-house could have then read the diary and would have discovered things that were so preposterous that Hitler couldn’t have possibly written them," Weinberg said. "Hitler, for instance, would never have gotten the color of his own uniform wrong."

Hendrik Zoerner, spokesman for the German Journalists' Association (DJV) said Stern normally does subject its stories to internal control mechanisms. The fake Hitler diaries were an exceptional case of gross negligence that would never be repeated again by Stern or any other media outlet, he said.

"But we in the media will be making other kinds of mistakes that are less spectacular than what happened at Stern," Zoerner said. "Nowadays journalists are under such time pressure that they spend less time doing sound research and fact-checking, so they wind up slipping up and making smaller mistakes on a daily basis."

Zoerner added that mistakes, even big ones are inevitable, but responsible journalists need to own up to them.

"Stern admitted its mistakes and worked through its crisis in public," he said. "By doing so, it restored some credibility to its image."