The IMF has approved a $17 billion (12 billion euro) bailout package for Ukraine to help the country's ailing economy. Russia, meanwhile, has said it "will not rush to anything stupid" in response to Western pressure. 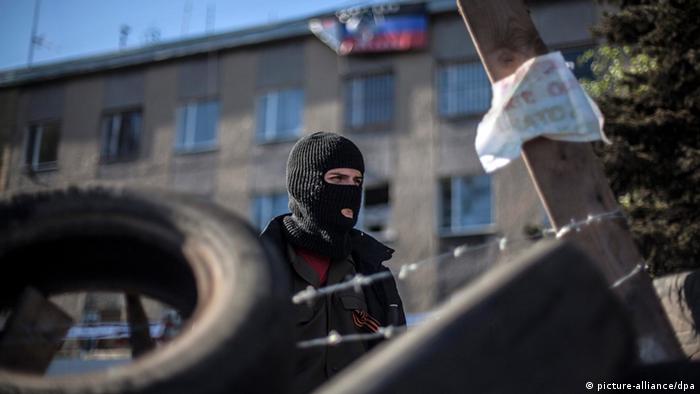 The IMF's executive board signed off on the two-year aid program on Wednesday. The bailout paves the way for an immediate deployment of $3.2 billion to Kyiv, which is in the midst of its worst economic turmoil since independence in 1991.

Of the immediate $3.2 that will help Ukraine avoid a potential debt default, $2 billion will be aimed at supporting the budget.

The overthrow of Pro-Russia President Viktor Yanukovych in February, and the installation of a pro-Western interim government that has vowed reforms, has opened the door to new loans from the IMF. But the political unrest in Ukraine has had harsh repercussions for the country's economy.

On Wednesday, Pro-Russian separatists seized government offices in more Ukrainian towns in the east, a further sign that Kyiv is losing control of its industrial heartland along the Russian border.

Moscow has already annexed the Crimean peninsula and is amassing its forces along the Ukrainian border, threatening to support the separatists in the east. Ukraine said Wednesday its military was on "full combat alert" against a possible Russian invasion.

Moscow not 'going to rush'

The United States and European Union have responded to Russia's actions by imposing sanctions, a move Russian Foreign Minister Sergey Lavrov said was "totally without sense."

Nonetheless, Lavrov said Wednesday during a news conference in Santiago after meeting with his Chilean counterpart: "We are not going to rush into stupid things. We want to give our partners the possibility to calm themselves."

He said Russia would reevaluate its stance if Western nations continued to try to hand out punishment.

"If their actions are going to continue, if they are going to use economic levers, in that case we are going to have to study a different approach," said Lavrov.

Lavrov said the most important thing was to promote dialogue between Kyiv and pro-Moscow activists, particularly in areas with large Russian populations.

He also called for separatists in Ukraine's east to free OSCE observers held in the rebel stronghold of Slovyansk. But he cautioned Russia "can't make decisions for these militias," saying "you have to take into account the threats these militias face from Kyiv."