ILO lashes out at austerity policies | Business| Economy and finance news from a German perspective | DW | 03.06.2014

ILO lashes out at austerity policies

The United Nations' labor agency has argued that premature austerity measures adopted by governments around the globe have hurt the world's most vulnerable people. It spoke of more poverty and social insecurity. 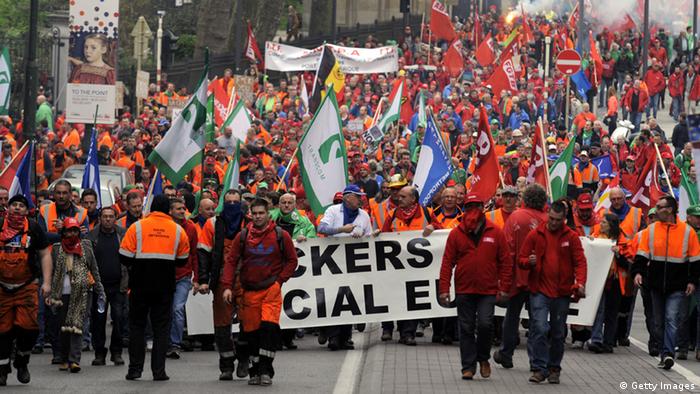 In a fresh report published Tuesday, the International Labor Organization (ILO) said that in 2014 alone more than 120 national governments cut public spending to cope with the aftermath of the global financial crisis.

It pointed out that while the cuts were being felt by people in well over 80 developing nations, austerity measures had also taken a huge toll across the 28-member European Union.

ILO Social Welfare Director Isabel Ortiz estimated that as many as 123 million people - accounting for a quarter of the bloc's population - were now classified as poor because of cuts in social protection.

Dealing a blow to the needy

"Cuts to pensions, the health system and social security as well as the removal of subsidies have hit poor people at a time when they were most in need of support," Ortiz maintained.

She pointed out that globally only 12 percent of the unemployed received benefits, ranging from almost two-thirds in western Europe to less than 3 percent in the Middle East and Africa.

The ILO report emphasized that at the beginning of the global financial crisis, and specifically between 2008 and 2009, some 50 developed nations implemented economic stimulus packages worth $2.4 billion (1.76 billion euros) of which about a quarter was spent on social protection measures.

Those acted "as an automatic stabilizer helping economies to regain their balance and protect the most vulnerable from economic disaster," the report said. But as the crisis dragged on, spending cuts took precedence with a view to consolidating national budgets around the globe.