The illegal activity has caused major environmental damage in Colombia, one of the world's most biodiverse countries. Officials say the spike in mining is also deeply concerning "because it has ties to organized crime." 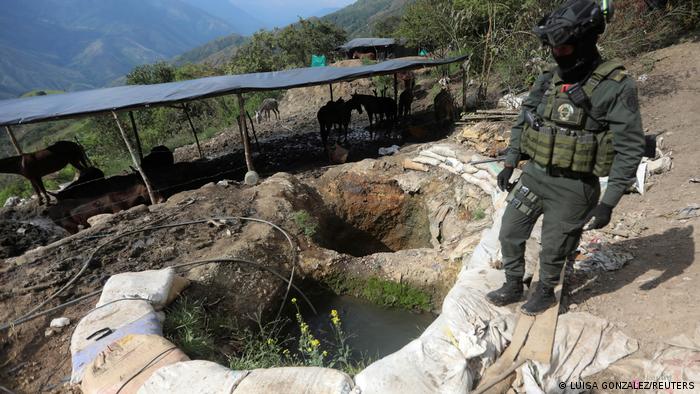 A policeman stands next to a well where minerals taken from illegal gold mines are washed in Buritica, Colombia

The illegal mining of gold from rivers and waterways in Colombia is increasing, the United Nations Office on Drugs and Crime (UNODC) said in a new report.

The number of hectares in use for alluvial gold production rose by 3% last year and the share of illegal output increased by an equal percentage, the report said.

The report stressed that extensive gold production by crime gangs, leftist rebels and others is causing grave environmental damage to the country, which is among the world's most biodiverse.

It is "a worrying situation because it has ties to organized crime," said Pierre Lapaque, the Colombia representative for the UNODC, while presenting the report in Bogota.

Alluvial gold mining is the process of extracting gold from streambed deposits. It results in contamination of water by mercury and other toxic substances.

"Without legality in this mining activity, we cannot move forward to create development and economic and social well-being," Energy Minister Diego Mesa said during the event.

He said that many miners want to join the formal system, and 5,000 of them have already done so during the present administration.

Mesa added that the government is working on strengthening the police unit that focuses on combating illicit mining, while toughening the penalties for illegal extraction.

The report did not mention how much gold has been extracted illegally, nor its commercial value.

According to Colombian authorities, the country's total gold production increased from 37.5 tons in 2019 to 47.8 tons in 2020, as prices reached historic peaks.