This mashup of a creature was indisputably a carnivore with croc-like teeth and razor-sharp claws. Paleontologists have said it roamed the earth some 75 million years ago in present-day Mongolia. 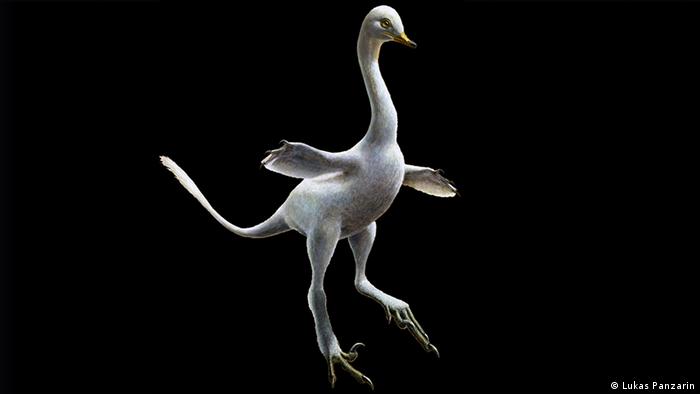 Scientists have uncovered a bizarre new dinosaur fossil they say looks like it was part duck, part crocodile, part ostrich and part swan.

They said it walked like an ostrich, but had flippers that allowed it to swim like a penguin. In addition, it had a duck-like bill but with razor-sharp teeth and the claws of a carnivore.

It wasn't big, only about 18 inches (45 centimeters) tall, but scientists believe it roamed the earth 75 million years ago in what is now Mongolia. Its complete, curled-up, skeleton was discovered in a sandstone rock.

"It's such a peculiar animal," said Dennis Voeten, a paleontology researcher at Palacky University in the Czech Republic. "It combines different parts we knew from other groups into this one small animal."

Kristi Curry Rogers, a paleontologist at Macalester College in the United States who did not participate in the study, called it "a pretty crazy chimera: a swan neck and dinosaur body, but with a mouthful of tiny teeth and hands and feet that look like they might be good for swimming."

Paul Tafforeau, a co-author of the study, said its mashup body enabled it run and hunt on the ground and fish in fresh water. He's a paleontologist at the ESRF, which is known as the European Synchrotron in Grenoble, France. They have a powerful X-ray generator which allowed the scientists to conduct numerous tests on the fossil.

The report's lead author, Andrea Cau, is a paleontologist at the Geological Museum Capellini in Bologna, Italy. Initially, he said, he was highly skeptical of the fossil's authenticity, both because of its appearance and the fact that the rock containing the skeleton had been smuggled out of Mongolia and left in a private collector's hands.

"I asked myself, 'Is this a real, natural skeleton, or an artifact, a chimera? If this is a fake, how could I demonstrate it?'" Cau said in an email. "Assuming it was a fake instead of starting assuming that the fossil is genuine was the most appropriate way to start the investigation of such a bizarre fossil."

Hans Sues, a paleontologist at the Smithsonian Institution who wasn't part of the research, lauded the research and said it "shows again how amazingly diverse dinosaurs were."