Tori Bowie has completed an American sweep of the 100-meter events in London, taking the women's 100 meters. Meanwhile, Germany have collected their first medal in London - silver in the heptathlon. 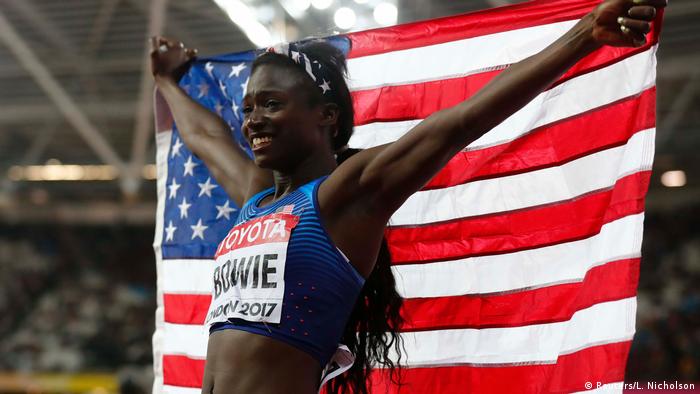 Twenty-four hours after Justin Gatlin rained on Usain Bolt's parade in the men's 100-meter race, another American, Tori Bowie (pictured above), won another sprinting medal for the United States, taking the women's 100 meters at the IAAF World Championships in London.

Bowie threw her chest forward with a final lunge at the finish line to edge out Marie-Josee Ta Lou by .01 seconds  and win with a time of 10.85 seconds.

Once over the line, Bowie fell onto the track not knowing whether she had won the gold or the silver medal. "I had no idea," she said afterwards.

The Netherlands' Dafne Schippers, the 2015 world champion in the 200m, took bronze with a time of 10.96. The favorite going into the final, Jamaica's two time Olympic champion, Elaine Thompson, finished third with a time of 10.98.

Earlier on Sunday, Germany claimed their first medal of the games with silver in the heptathlon. Carolin Schäfer finished 88 points behind Nafi Thiam, who added a world championship gold medal to her Olympic title. 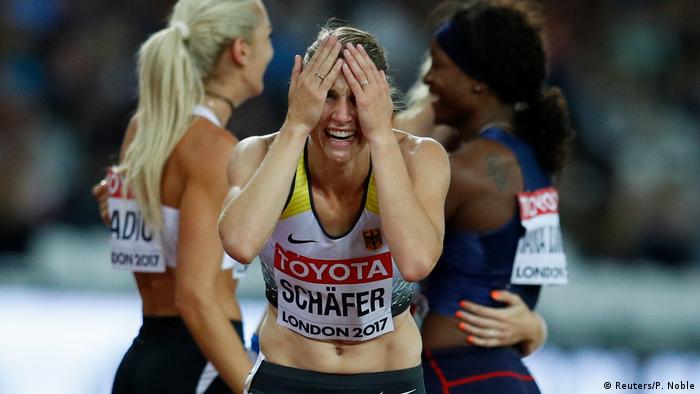 "I can hardly put it into words, it's simply amazing," Carolin Schäfer said after winning silver in the heptathlon

The 22-year-old Belgian already had a huge lead heading into the concluding 800m race in the two-day competition. Thiam finished last in the final heat but her 6,784 points were more than enough to win gold comfortably after winning three of the seven events.

Greece's Olympic champion, Ekaterina Stefanidi, won the women's pole vault.  The 27-year-old vaulted a national record of 4.91 meters for victory in a compelling competition. She failed three times at what would have been a championship record of 5.02m.

Kenyan dominance in the marathon

Geoffrey Kipror Kirui of Kenya won the men's marathon with a come-from-behind run finishing on Tower Bridge. Kirui cruised through the last portion of the race as he made his way across the finish line. He won in 2 hours, 8 minutes, 27 seconds, and was 1:22 ahead of Tamirat Tola of Ethiopia. Alphonce Simbu of Tanzania finished third. 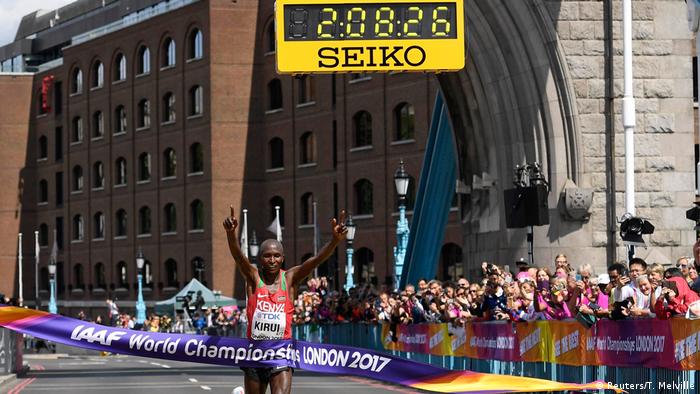 In the men's shot put, New Zealand's Tomas Walsh fought off stiff competition in the final to take his country's first gold medal of the World Championships. The Olympic bronze medalist Zealander threw 22.03 meter on his final attempt but he had already secured the gold with his third effort of 21.75.

Joe Kovacs, the 2015 world champion, thought he had retained his title on his last attempt which looked to be about 22 meters. However, it was ruled as a foul and American had to settle for silver with his third attempt of 21.66. The bronze medal went to Stipe Zunic of Croatia with a distance of 21.46.