Hyping the future: Our exponential era | Business | Economy and finance news from a German perspective | DW | 06.06.2018

Hyping the future: Our exponential era 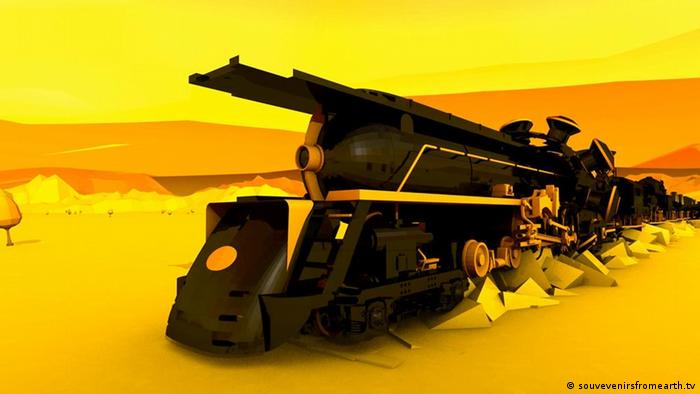 "We live in extraordinary times," says Stephan Balzer, founder of Red Onion, a consultancy that helps senior corporate executives grapple with fast-paced changes in technology — and the consequent challenges to corporate culture. "The pace of technological change is accelerating. Keeping up with the disruptive potential of new technologies is difficult for traditional corporate managers."

Balzer brought the TED-X conference series to Berlin ten years ago, in 2008, and for the past three years, he has also served as event manager for Singularity University Germany, an annual event in Berlin that propagates the worldview of the founders and staff of Silicon Valley-based Singularity University (SU), which isn't actually a university. It's a sort of hybrid between a PR agency hyping the marvellous potential for disruptive new technologies to change the world for the better — a company that sells short courses to corporate managers — and a business incubator. 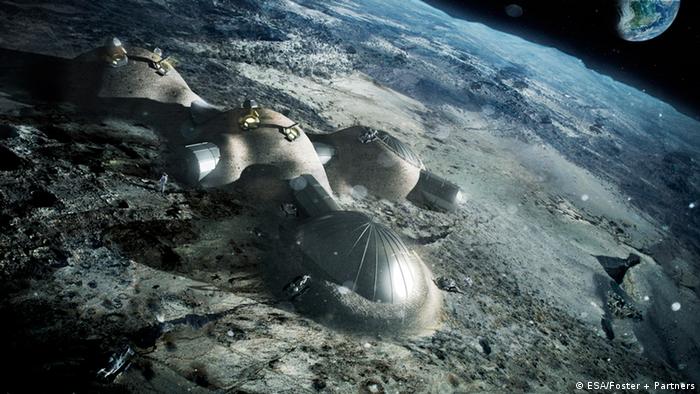 SU's worldview is easy to describe in a few words, even if its implications are difficult to grasp: Technological evolution is advancing at an exponential rate, and that means nearly every industry is facing disruption.

Moore's Law is named after Gordon Moore, an engineer who wrote papers in 1965 and 1975 observing that the number of components on a given area of integrated circuit tends to double every year or two. That's an example of exponential growth, and it's why the smartphone in your pocket now has more processing power than the total computing power of NASA and the US military had around 1970. 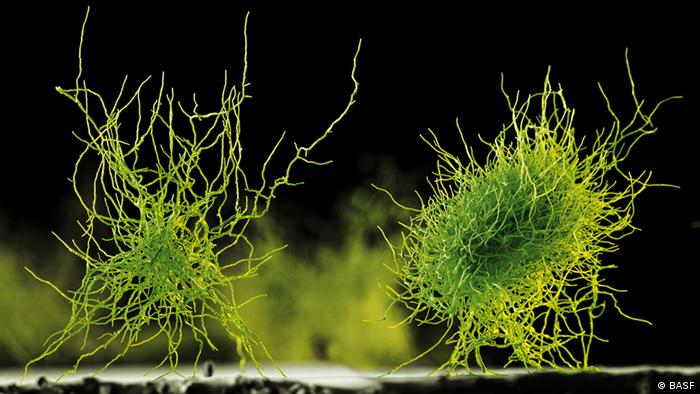 Fungus as a factory: These Aspergillus niger fungi (bread mold) can be genetically engineered to produce useful enzymes very cheaply

The key message Singularity University puts out at its events and conferences is that we live in an exponential era. It isn't only integrated circuits whose performance is doubling every couple of years. Versions of Moore's Law apply to a whole raft of technologies, which are all developing exponentially at the same time.

What will happen, for example, when computer processing power, 3D printing speed and accuracy, the speed and precision of DNA manipulation, general-purpose robot hardware systems, and automated design software are all doubling in power-to-price ratio every couple of years? What will we not be able to build, cheaply and precisely, a decade or so from now?

Understanding the power of exponential progress is useful to entrepreneurs and corporate managers. Gordon Moore himself understood it well; he founded Intel, the semiconductor manufacturer, in 1968, and became a technology billionaire. 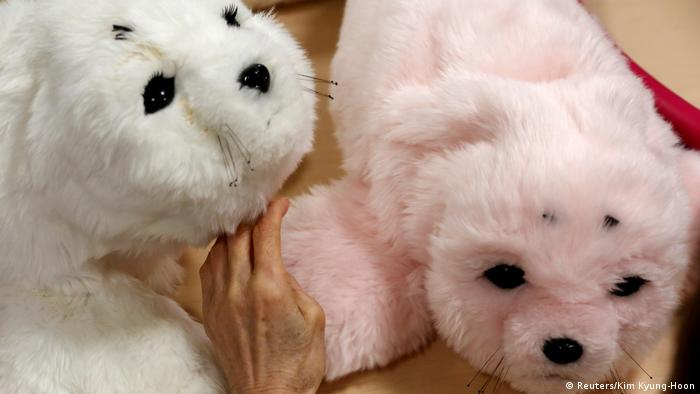 Japan is investing heavily into development of domestic robots. One important application is to keep seniors company in care homes, like these robot plush toys meant to resemble seals (sort of). Japan has one of the world's largest populations of seniors

By the same token, failing to understand it is dangerous, Balzer warns. Corporations that don't see the changes coming won't be the ones to profit from them. They will be among the disrupted, rather than the disruptors.

"It's hard for people to grasp that some technologies are making exponential rather than linear progress, because the human mind tends to think in linear terms," Balzer says. "Corporate culture needs to wake up to the fact that we're living in an exponential era, because the world is full of potential for technological disruption of existing industries."

3D printing has its own Moore's Law

Recently, a trio of researchers at the Massachusetts Institute of Technology (MIT), Christopher Benson, Giorgio Triulzi, and Christopher Magee, set out to measure the rate of progress in 3D printing (3DP), also known as "additive manufacturing." They wanted to know whether some version of Moore's Law applies to 3DP — in other words, whether it's an exponential technology.

It turns out the answer is yes. 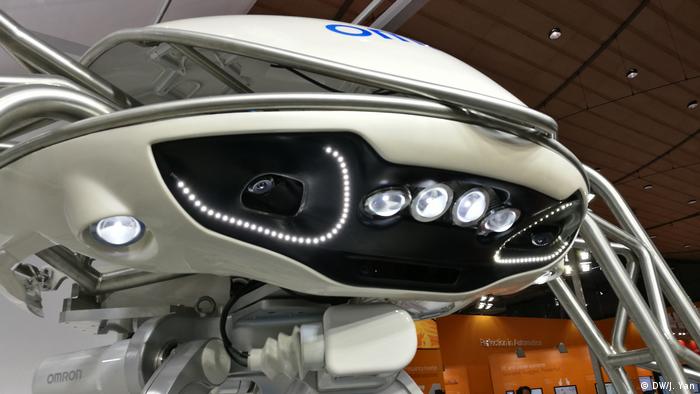 This is a robot called "Forpheus" that plays table tennis, a popular sport in Germany. Built by a company called OMRON, which foresees "a future of integration between people and machines"

There are several different kinds of additive manufacturing. Benson and his colleagues examined the technological improvement rate of a 3DP technique called industrial stereolithography, and found that it was improving at about 38 percent per annum. They then estimated the rates of progress in several other 3DP technologies, including inkjet-power-based 3DP, metal selective laser sintering (metal SLS), fused filament fabrication, and nonmetal SLS.

For the 3DP domain as a whole, they estimated a rate of annual improvement of 29.4 percent. That means a doubling in the price-performance ratio approximately every 2.4 years. That's not quite as fast the as the doubling rate of integrated circuit density, but it's fast, and it's exponential.

Andre Wegner, founder of Silicon Valley-based startup Authentise, and SU's Chair of Digital Manufacturing, was one of the speakers at this year's SU Berlin event. Wegner's theme is the future of manufacturing, and during his richly illustrated talk, he took the audience on a walk into the future of 3DP. 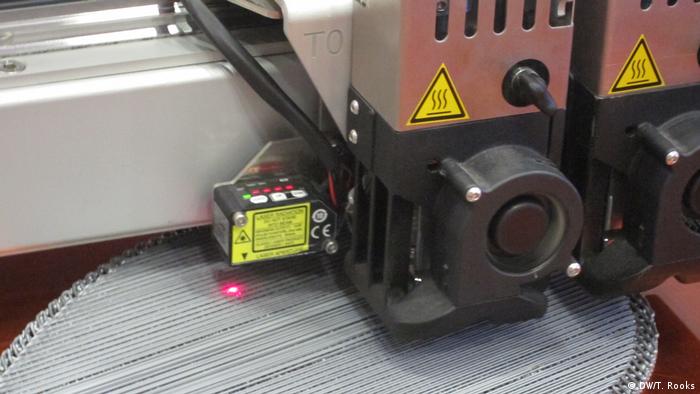 A harmless 3D printer at the Cube Tech Fair, Berlin, May 2017. Looking back from the year 2035, this thing will look laughably primitive, slow, and limited in its capabilities

For three-quarters of an hour, Wegner explained the radical changes he sees coming in the future of manufacturing, in the speed, agility, and customisation with which anything from shoes to aircraft parts will be designed and made-to-order.

In this emerging world, shoes will be custom printed for each individually scanned foot. Very likely, the scanners will be home units. Want new shoes? Scan your bare feet. Upload the data to the cloud, and get bids from local 3DP facilities. Choose a supplier to make them, and see them delivered within hours by a distribution firm, perhaps by autonomous e-cart.

Going to the shoe store and trying on dozens of different shoes, looking for a pair that more or less fits, will be a thing of the past soon. Shoemaking and shoe retail are industries begging to be disrupted. 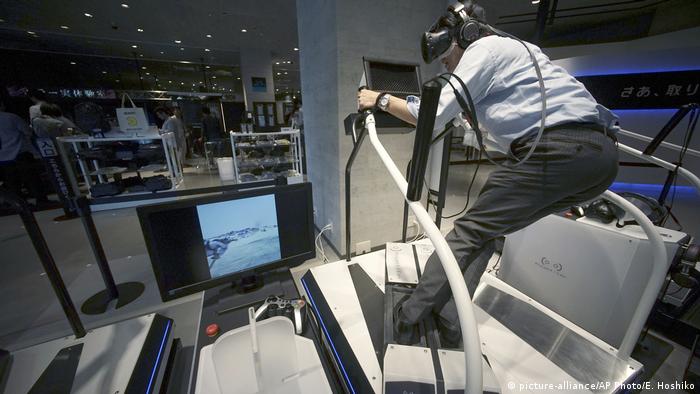 In this 2016 photo, a man in Tokyo is skiing in an office, using HTC's Vive virtual reality headset and a contraption the makers have dubbed "Ski Rodeo"

What about aircraft maintenance? Reducing maintenance down-time would be worth serious money for airlines. In the future, digital systems will detect wear on all an aircraft's parts automatically, Wegner said, and on-site 3D printers at airports will create replacement parts in time to prevent parts failures. Not only that: Wegner predicted that on the basis of millions of data points collected from in-service aircraft, automated design software could design improved replacements for existing parts, in time for immediate delivery to an aircraft when it lands.

And why not use 3D printers to make things like bicycles or motorbikes?

Many other technologies are exponentially evolving. Genetic engineering, carbon nanotubes, desalination, agricultural robots, autonomous e-mobility, virtual reality and remote-presence gear — everything is in flux. The future is not going to be like the present, Balzer says, and German managers haven't yet grasped the scale of the coming changes. That's why he's on a mission to shake up corporate culture. "Germany is a manufacturing nation," he observes. "We'd better get our heads around all this."

Several billionaires, most of them Californians, have been funding firms involved in developing life-extension technologies. What if they succeed? What if billionaires alive today live indefinitely and get ever richer? (06.03.2018)