Hunger in the land of Gandhi: the shadow on an emerging power

India is a nuclear power - the largest of the world's democracies - and sees itself as a global superpower of tomorrow. What's often overlooked, however, is that half of the world's malnourished children live there. 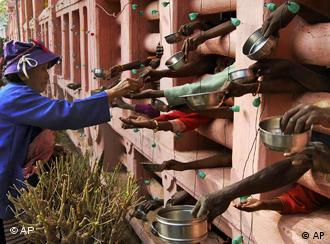 Hunger is a depressing reality in booming India

The readers of India's popular English-language daily Hindustan Times were moved to tears by a recent article that tells the story about a hunger-stricken three-year-old girl in a Mumbai slum. The girl weighs but 10 kilograms (22 pounds) and is much too short for her age. Her father is an electrician, her mother a housekeeper, and the family gets by on around 8,000 rupees (140 euros, $160) per month.

This is not a poor family by Indian standards. Poor, according to the government, are those people who live on 32 rupees a day, or some 60 cents. Only these people are eligible for a state-funded program that allows them to buy groceries at cheaper prices.

At the same time, however, rents in Mumbai are exorbitantly priced. Living space in the financial metropolis has long been scare: "When [my daughter] is hungry, she sometimes eats dirt," said desperate father Santosh Ramdas Doiphode.

The fate of this girl can be taken as representative of the around 250 million people who live in hunger in India. A gruesome ritual in which hungry children have their stomachs burned to avoid the even more gruesome pains of hunger is still in practice in some of the nation's 28 federal states. 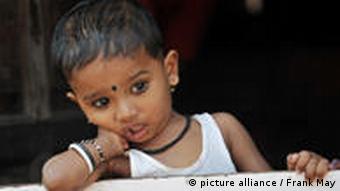 The international aid organization Oxfam has published alarming statistics on hunger in India: According to their figures, around 2,000 children die of starvation or the consequences thereof each day. The British medical journal Lancet said a child in India is 15 times more susceptible to infection than in Great Britain, for the immune system of a person dealing with hunger is significantly weaker. Heat, lacking hygiene and contaminated water are additional factors that facilitate the proliferation of disease.

"The situation is getting worse day by day," warns rights activist Vandana Shiva, who was awarded the "Alternative Nobel Prize" in 1993 for her efforts.

Shiva paints a foreboding picture of times to come. "The consequences will be devastating, if nothing is done - and fast," she says. "We will see the advent of political instability, if not outright undemocratic leadership. We are already witnessing the frustration of the people throughout India."

Demonstrations against corrupt political officials and calls for national strikes are the direct manifestations of this frustration, Shiva says. "Every hard-working and honest person in India feels robbed of his or her future. Pretty soon, we won't be able to do anything to prevent the country from imploding."

At the same time, there are some 50 billionaires in India, according to Forbes magazine. For years, India's economy has shown growth rates of over around eight percent, and western companies are waiting in line to do business with Indian companies. The country's colossal hunger crisis doesn't fit in this picture; the suffering of Indians is either ignored in public or simply dismissed as a cliché - so as to maintain the image of the booming nation. 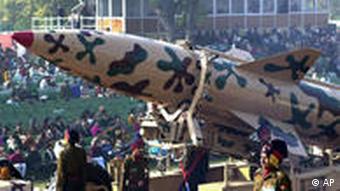 Experts like Devinder Sharma, one of the leading writers on the topics of food safety and agricultural reform in India, stress that the food crisis is a consequence of Indian's economic boom. For the boom didn't encompass all of India, but rather only few sectors - for instance the IT and telecommunications industry.

Two-thirds of Indians live from the agriculture industry. The divide between rich and poor is growing ever larger, and inflation is leaving the struggle to make ends meet increasingly impossible. Populations in rural areas, in particular, are growing faster and faster, but educational opportunities aren't. The alarmingly high suicide rate among Indian farmers who have fallen into debt is just one tragic signal of this vicious circle. 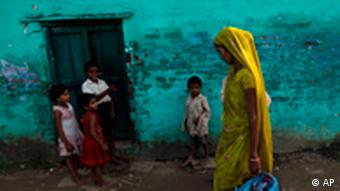 "Given the complexity of the situation, our approach to solving these issues must be multifaceted," says Sharma. Wheat supplies in the country, which are more than sufficient to feed the population, must reach all Indians.

The widespread corruption in India's agriculture sector must be stopped to make protecting the needy a reality, Sharma says. "We have to make sure that reforms actually advance the agriculture sector and result in an equal spreading of resources."

It was the dream of Mahatma Gandhi, the father of Indian independence, for all Indians, regardless of gender, to one day be able to provide for themselves. Today, in the age of economic boom, India appears to be further away from this dream than ever before.

Sure, the government has promised to confront the problems leading to the hunger crisis, and there is no scarcity of ideas aimed at solving it. What's missing is the keeping of these promises and the implementation of those ideas.

"If we say these days that a situation is alarming - as the food crisis in India indeed is - nobody seems to listen," he says. "Within five years, India will belong to the countries that import the majority of their food. We should think hard about this."

Bangalore - India's 'Silicon Valley' - is also the country's suicide capital, accounting for some 16 percent of suicides in India's biggest cities. Most of those killing themselves there are aged between 16 and 40. (20.10.2011)