The Hungarian parliament has passed a controversial new media law that sets up a board to oversee public and private media outlets. The move has led to fears about press freedom with protests ahead of the vote. 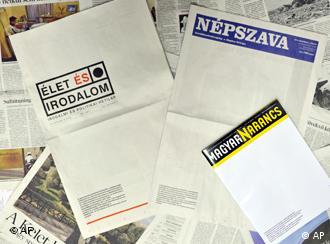 Lawmakers in Hungary have given a controversial new body powers to oversee public news production and levy high fines on private media that break rules on political reporting.

The Hungarian parliament passed the law establishing the National Media and Communications Authority (NMHH) on Monday evening, according to the Hungarian national news agency MTI.

Some 1,500 protesters gathered outside the parliament in the hours before the vote, claiming that it would restrict press freedom, after an appeal was made on the social network site Facebook. 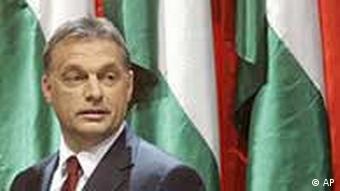 Orban's government says the changes are necessary as technology changes

The new body is to be controlled by members of the ruling right-wing conservative Fidesz party, which is led by Prime Minister Viktor Orban and has a comfortable majority in parliament. The government claims the law is overdue and reflects a need to address changes in technology.

The NMHH council will be able to impose heavy fines on the producers of radio, television, online and newspaper content that is deemed "not politically balanced."

Journalists could also be required to submit names of their sources to the NMHH if necessary for "national security," according to draft rules.

In protest against the legislation, some newspapers were released with blank front pages earlier this month.

Critics say the aim of the law is to silence dissent, with fines of up to 92,000 euros ($120,000) large enough to force the closure of small media outlets.

Ukrainian President Viktor Yanukovych faced a tough grilling over press freedom in an interview with the German media before a visit to Berlin on Monday. The president had hoped to focus on economic issues. (30.08.2010)

Press freedom is under threat in countries like Russia and China. But that does not mean it can be taken for granted in Western Europe. Old scandals and recent issues have hurt Germany's press freedom rating. (03.05.2010)