How to generate your own solar energy | Environment | All topics from climate change to conservation | DW | 01.09.2021

How to generate your own solar energy

You can find small, self-made solar power panels on walls and balconies, roofs and terraces all over the world. Here's a look at what kinds of systems are out there — and how to build them, keeping in mind costs. 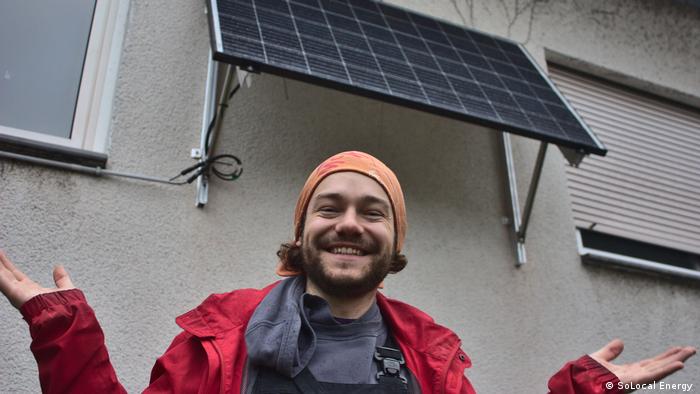 Not only is solar power becoming cheaper, it's also a viable option in a variety of settings

1. Plugged into the grid: Mini systems for your home

Ever more people are meeting their electricity needs by purchasing mini solar panel systems, known as plug-in solar devices. The small photovoltaic systems come with one or two modules and have a power capacity of up to 600 watts each. That's enough to meet up to 30% of the energy needs of one household, for example providing electricity for the fridge, washing machine, dishwasher or computer.

What is unique about small panel systems is that they can be plugged into any normal household outlet, which is how they feed the solar power into the grid. Installation is easy — it's literally "plug and play" — while the devices have been deemed safe. Another benefit is that you don't need an electrician to install them. They can go on your balcony, your roof or in your garden or yard. 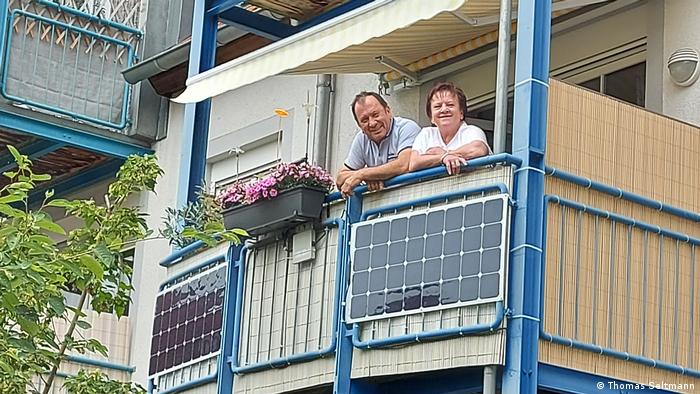 "There are already several hundreds of thousands of these types of systems in use in Germany and its neighboring countries. The devices are basically very safe, so far they're not known to have caused any kind of damage," says Thomas Seltmann, a photovoltaic expert at the Consumer Association for the western German state of North Rhine-Westphalia.

And there is a lot of interest. "We are at the beginning for a boom of plug-in solar devices," says Seltmann. 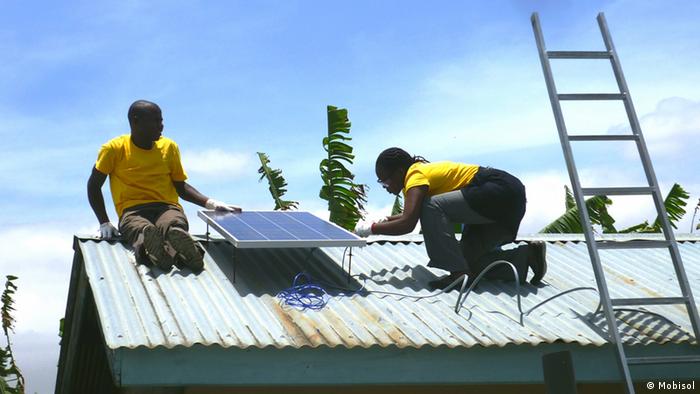 An 'island' solar system far away from the grid, in Rwanda — this home system can power lights, TV and radio

In 2010, around 2 billion people lacked electricity in many regions of the world because they didn't have access to an electricity grid. Today, that number has dropped by 1.3 billion. The reason: It's easy to generate electricity anywhere these days thanks to what are known as island solar systems.  Equipped with a solar module and a battery, it's an easy and very affordable solution.

These small solar home systems include a tiny 4-watt module with a battery and an efficient LED lamp generating enough light to do homework at night.

Powering something bigger, such as an electric car, would require a 2,000-watt system, or roughly 10 square meters of modules. With that amount of electricity, a car could drive up to 16,000 kilometers (9,941 miles). 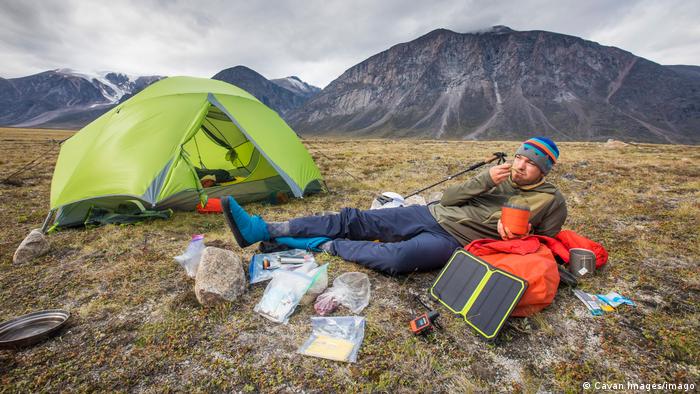 Such systems are comprised of a solar module that can be easily folded up, as well as an inverter with a battery. These mobile power systems come in all different shapes and sizes for different needs, from tiny panels the size of a wallet that let you charge your cell phone, to very powerful systems with a capacity of 160 watts that let you charge your bike batteries, as well as power your laptop and fridge inside of a camper van. Many people buy them from specialized online retailers.

After your trip, you can still use them at home. The solar module can be easily placed on a window sill, where it could charge a phone. Or a bigger system could even serve as a backup power source for the fridge if the power goes out.

4. How much does solar power cost? 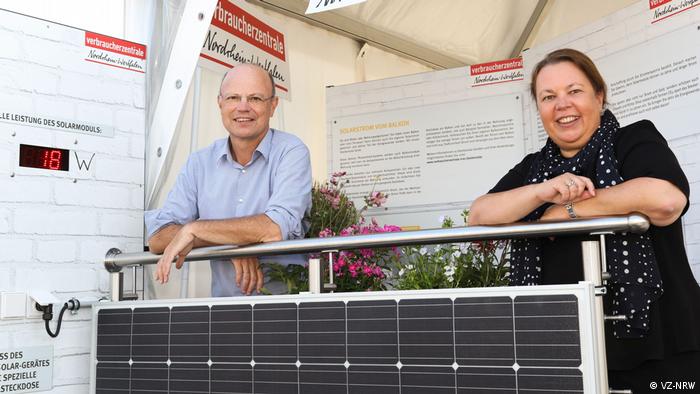 Consumer advocates and politicians promote plug-in solar panels, calling them a win-win for tenants and the climate

The price of mini solar panel systems depends on the performance of the module and battery. Other cost-decisive factors are quality, appearance and functionality.

Prices for good quality, mini solar home systems with a small battery and an economical lamp start at around €30 ($35), while island solar systems that can power a TV and fridge would cost several hundred euros. Mobile solar power systems for camping, which come with special panels that can be folded to fit into your backpack, have the same functionality but cost a bit more.

Plug-in solar devices generally don't have a battery and can be directly integrated into the grid. They cost from €350 to €900 in Europe. According to the Consumer Association, plug-in devices in Germany pay for themselves after roughly six to nine years.

In low-sunlight countries like Germany, electricity produced by solar power costs on average between 7 and 10 cents per kilowatt hour (kWh). In more sunny regions, such as southern Europe, Africa, Latin America, California and many parts of Asia, this is less than 5 cents. Electricity from the grid is two to five times more expensive.

5. Are mini solar power plants good for the environment? 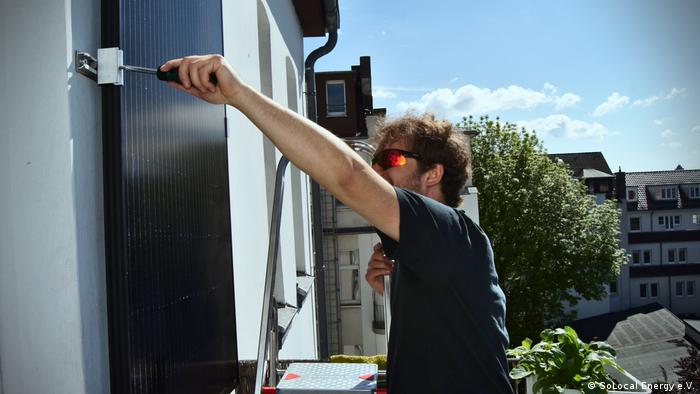 Plug-in solar device for the balcony wall: in some cities, associations even help with assembly

Mini solar panel power systems lower electricity costs and help protect the climate. In fact, according to the German Association for Solar Energy, an additional 1,000 to 2,000 megawatts of electricity could be generated by mini solar power modules in Germany alone. That's how much electricity a coal power plant produces, which is much more harmful for the environment.

Experts say they also have another advantage for the climate.

"Many people so far don't really have any inkling of how much electricity they use, and don't have any experience with solar energy and battery storage," says Krisztina Andre, who works at Bündnis Bürgerenergie, a German association that promotes renewable energy.

According to Andre, people who have their own solar power modules are able to monitor their own energy use, learning how to save energy costs and doing something good for the planet at the same time.

Andre is convinced that another boost for home solar modules could come from the rise of e-cars, as their batteries can be used more generally as energy storage.

"Electric cars have large batteries, and their electricity could easily be put to good use elsewhere: for meeting your own energy needs at home, as well as in the neighborhood through the public grid."

How much power will Germany need for its energy revolution?

Germany intends to become climate-neutral. The big questions is just how much wind and solar power that will require. But it's difficult to figure out how much power the country will actually need in the next decade.

Solar energy heats up job market across the globe

Millions of workers stand to benefit from new jobs in the solar industry. But experts still see challenges that could overshadow this golden opportunity.

Photovoltaic panels that harvest sunlight are being used across the world — and even outside it — to generate clean electricity.

Solar power systems enable farmers around the world to harvest twice as much: Panels on stilts generate electricity while crops grow underneath. The shade helps conserve water and increases yields.

Lebanon: Life without gas and electricity

Lebanon is suffering from the worst economic crisis in its history. Dramatic shortages of electricity, gas and other supplies make life in the country extremely difficult.