How Miles Davis remade jazz over and over again

He revolutionized jazz several times and dabbled in many other musical genres. In honor of the 25th anniversary of trumpet legend Miles Davis' death, here is a look back at the mark he left on music. 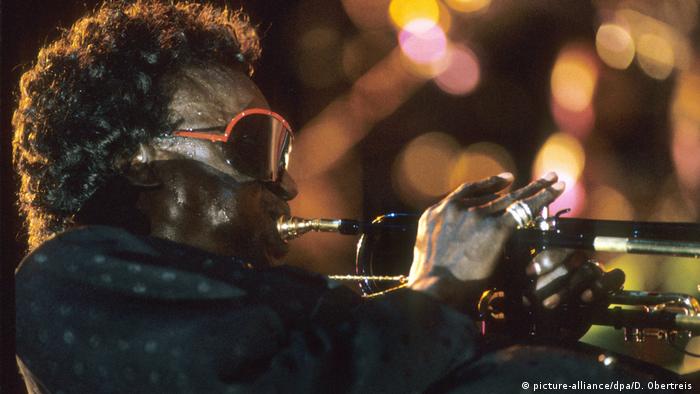 The trumpet dances gracefully over the bass and drums, softly rising and falling. Cool and relaxed, it navigates across the harmonies, finding a new melodic route again and again until it gently lands and gives way to the next solo instrument.

It feels like just a few minutes, but "Bag's Groove" is actually 11 minutes and 12 seconds long. It's the result of a studio session on Christmas night in 1954 with Miles Davis' band and renowned guest musicians Milt Jackson (vibraphone) and Thelonious Monk (piano).

The session didn't start well. Davis' record label boss had invited the two guests without telling him. Davis didn't have anything against Jackson. But he thought Monk was always playing the wrong chords and refused to let him accompany him during his solos - which turned out to be a stroke of luck.

That left Davis room for his improvisations and revealed how different he was from Jackson and Monk. The group recorded two versions of the song, both of which made it onto the album of the same name three years later. The distinctly different ways of playing put "Bag's Groove" among the most exciting jazz recordings of the 1950s. 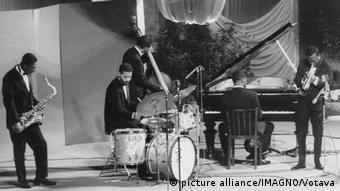 The "second" Miles Davis quintet in 1965

Forming the foundation of modern jazz

Five other songs on the album have also made it into jazz history, including Sonny Rollins' composition "Oleo." In the work, the nasal trumpet sound that became Miles Davis' trademark - which is produced with a mute - was heard for the first time.

Jazz critic Whitney Balliett wrote about the album, which was released in 1957, that Miles Davis played like someone who was walking on egg shells. The album became a cornerstone of modern jazz. But let's take a step back in time.

After saxophone legend Charlie Parker got Miles Davis to join his bebop combo in the 1940s, the young trumpet player worked like crazy to explore new musical dimensions. He founded his legendary first quintet and recorded four LPs in just one year. The Miles Davis Quintet was made up of John Coltrane (sax), Red Garland (piano), Paul Chambers (bass) and Philly Joe Jones (drums). Each one of them would later become famous in their own right.

The album that came about in 1957 with arranger Bill Evans was highly unusual. A big band without a saxophone but with French horns, an oboe and flutes. Miles Davis was the only soloist. His instrument was the flugelhorn, a brass horn that sounds deeper and softer than a trumpet. "Miles Ahead" is nearly a concept album - a suite in which one piece flows into the next.

A year later, Davis activated his quintet again and added alto sax player Cannonball Adderley. The next album did justice to its creative name: "Milestones."

How to control the chaos of jazz

In 1959, the celebrated album "Kind of Blue" followed - and also became legendary. At that time, Miles Davis had already become one of the best-paid musicians in the world - which was remarkable for an African-American in a period that was still marred by racism and segregation in the US. He became a role model for an entire generation of black musicians; parents named their children after him. 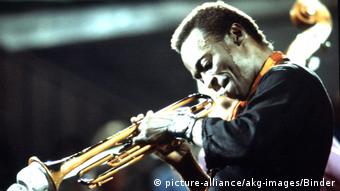 Davis carefully chose the musicians he wanted to work with - and the line of hopefuls was long. In 1964, he founded his second famous quintet with Herbie Hancock (piano), Wayne Shorter (soprano sax), Ron Carter (bass) and Tony Williams (drums). These guys were already well established as solo artists and were known for their rather avant-garde style of free jazz.

Nevertheless, Miles Davis managed to bring the troupe together and show them the difference between traditional and avant-garde styles. German jazz journalist Joachim-Ernst Berendt recalled Davis explaining that playing chaotically does not bring freedom. "You need controlled freedom," he'd said.

When electronic music starting making its way into pop and rock, Davis got on board. He announced that he could found a better rock band than Jimi Hendrix. So he did. He gathered pianists Joe Zawinul and Chick Corea, Billy Cobham on drums, guitarist John McLaughlin and Dave Holland on bass.

The trailblazing albums "In a Silent Way" and "Bitches Brew" ensued. A new style of music had conquered jazz - their electrifying mix of jazz rock, fusion jazz, electric jazz and elements of world music also integrated the Indian instruments sitar and tabla.

Davis gave his trumpet the "wah wah" treatment, like soul and funk guitarists did, and his sound became more percussive. 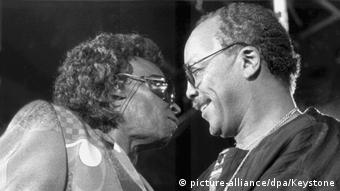 To the confusion of some in his audiences, Miles started performing with his back to them. While the move was sometimes interpreted as a sign of arrogance, he was in reality doing it to give cues to his band.

In the mid-1970s, Davis withdrew from the stage. He had outdone himself and lost his musical inspiration. His intense lifestyle - and the drugs - were becoming a lot to handle.

After a six-year break, Davis decided to make a comeback and in 1981 he enchanted his audience at the New York Jazz Festival. The old Miles was back with his pure trumpet riffs and without the electronic boost. He dusted off jazz rock and made it palatable again. 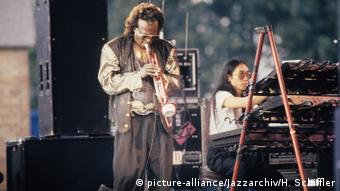 Davis recorded two funk albums before moving on to pop music. On his 1985 album "You're Under Arrest," he performed Michael Jackson's "Human Nature" and Cindy Lauper's "Time After Time" - but didn't get the best reviews.

By that time he was nearly 60 and had already revolutionized jazz at least three times. He could do whatever he wanted and could allow himself to joke around with audiences and be friendly to journalists.

Without the burden of having to reinvent the musical wheel yet again, Davis recorded the relaxed album "Tutu" in 1986, which brought him his third Grammy. In 1991, he headed back to the studio to record the first tracks for his last album, "Doo Bop," with hip hop producer Easy Mo Bee. But he would never get to complete it.

In September 1991, Davis suffered a stroke and went into a coma. On September 28, his family decided to take him off life support.

"Doo Bop" was released posthumously in 1992. Easy Mo Bee mixed fragments from their studio session into the tracks that weren't recorded by Davis. It would become the jazz legend's most commercially successful album.

Till Brönner is celebrated as Germany's most successful jazz performer - not just at home but all over the world. DW spoke to Germany's most recognized, and probably tallest, talent in jazz about his new album. (31.08.2016)

Take the A Train with Sarah as she spends a day in the House of Swing in New York with jazz trumpeter Wynton Marsalis and his Jazz at Lincoln Center Orchestra. (09.09.2016)

His breakthrough came in 1950 when he toured Europe with Benny Goodman. Belgian harmonica player Toots Thielemans also played with Miles Davis and Ella Fitzgerald. He passed away in Brussels. (22.08.2016)