How Kohl and Gorbachev sealed the deal on German reunification | Germany| News and in-depth reporting from Berlin and beyond | DW | 14.07.2010

How Kohl and Gorbachev sealed the deal on German reunification

The Berlin Wall may have fallen in 1989, but it was by no means clear that East and West Germany would come together. One key step in the process was a trip by the West German Chancellor to Russia on July 14, 1990. 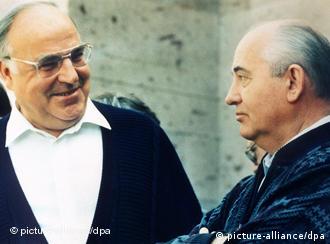 On July 7, 1990, the Economist magazine began a story on what was already being touted as a historical meeting with the following words: "The West German chancellor, Mr. Helmut Kohl, will head to Moscow chasing the deal of his life."

The deal was, of course, German reunification, and Kohl's negotiations with Soviet leader Mikhail Gorbachev, which took place in Moscow and Stavropol from July 14 to 16, have often been regarded as a swashbuckling diplomatic breakthrough.

That's something of an exaggeration. The Soviets had already agreed in principle to German reunification in consultations with the US, which had been going on since late 1989 after the opening of the Iron Curtain.

The main sticking point was whether an enlarged German nation would be allowed to remain a member of NATO, as West Germany had been.

One of Kohl's point-men in dealing with the Kremlin, Deputy Head of the German Chancellory Horst Teltschick, says Kohl made German NATO membership a precondition for extending the trip to Gorbachev's vacation dacha. 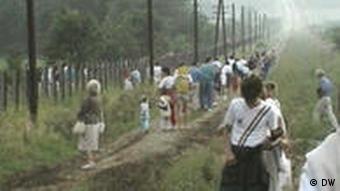 "Even in the first conversation, Gorbachev agreed in principle that he wouldn't stand in the way of Germany being part of NATO and regaining its full sovereignty," Teltschick recalled.

Historians point out that Gorbachev had already signaled flexibility on the NATO issue in a May 30 meeting with US President George H.W. Bush. But that did not significantly diminish the importance of the Kohl-Gorbachev meeting.

"The Kremlin had been vacillating somewhat on NATO, and nothing was a done deal," says Andreas Roedder, professor of history at the University of Mainz and author of a highly regarded book on German reunification. "Concluding these sorts of negotiations was an achievement of its own."

In essence, the outlines of a deal were already in place by July 14. What would determine whether it got done were personalities. 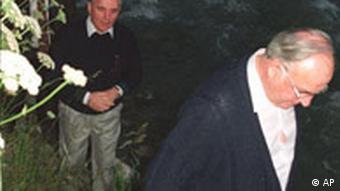 Kohl and Gorbachev took a number of walks in the Caucasus

"In a period of rapid change like the end of the Cold War, the time from early 1989 really through to 1991, personal relationships meant a great deal more than they might have at any other time," Condoleezza Rice, then director for Soviet and East European Affairs at the National Security Council and later US secretary of state, would recall in a 1997 interview.

And indeed, given what was at stake, the mood was extraordinarily friendly in July 1990.

On a riverside walk taken by both delegations at the Soviet leader's dacha, Gorbachev's wife even presented Kohl with a bouquet of handpicked flowers.

"That, too was a signal," remembers Teltschick. "There was no chance of quarrel - both sides wanted a positive outcome."

And the personal chemistry between the hulking German Chancellor and his Russian counterpart was to prove decisive. 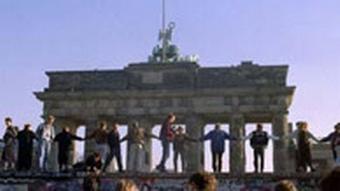 By October 1990, all inner-German borders were gone

"I think it's very important that Kohl and Gorbachev were around the same age," Roedder says. "They were both children of World War II, and it was conspicuous that both men emphasized the idea of joint responsibility in their statements."

Kohl convinced Gorbachev, if he still needed convincing, that a unified Germany would not be a threat to the Soviet Union. And on July 17, he was able to announce that the Soviet leader had given the go-ahead for West and East Germany to join.

West Germany had essentially been given permission to incorporate a territory of 108,333 square kilometers (41,830 square miles) and 16 million people that had previously been the most prosperous state in the Warsaw Pact. The Cold War was over, and Kohl's place in history assured.

But what did Gorbachev get in return? 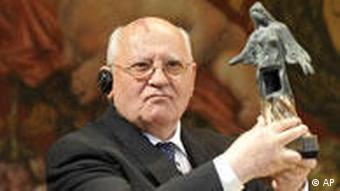 Gorbachev is always a welcome guest in Germany

Gorbachev came into the meeting with Kohl on very difficult footing. The Soviet Union had racked up an enormous debt as a result of the 1980s arms race with the US and was in no position to maintain control over its satellite states in Eastern Europe.

In return for the Kremlin accepting German reunification, Kohl agreed to pay the costs from withdrawing Soviet troops and resettling them at home. He also promised financial help aimed at stabilizing Soviet finances.

The total amount West Germany ultimately paid to the Kremlin for reunification is unknown, although it's usually estimated at between 50 and 80 billion marks (25-40 billion euros or $31-50 billion). A price, most would say, that was well worth paying.

"If Gorbachev had said, 'Mr. Chancellor, I'm in agreement, but it will cost the Federal Republic of Germany 50 to 80 billion,' how could we have said no," Teltschick said.

Historians say it's is an over-simplification to say that Gorbachev sold off East Germany.

"I think if Gorbachev had wanted to do that, he would have demanded a lot more money," Roedder said. "In comparison, the licensing rights for mobile phone frequencies for the areas concerned were more expensive."

Whatever the Soviet leader's motivations, by the time Kohl returned to West Germany, the die was cast. West and East Germany officially united on October 3, 1990. On December 25 the following year, the Soviet Union dissolved.

Whether these events were inevitable or not is matter for speculation. The fact is that Kohl and Gorbachev's meeting in mid-July 1990 paved the way for history to proceed as it did.

And rarely, if ever, was the political map of Europe redrawn so harmoniously.

On April 5, 1990, 400 representatives entered the chamber of the Palace of the Republic in East Berlin. They were the first parliamentarians to have come to power in free and fair elections. (04.04.2010)

Helmut Kohl is considered the architect of German reunification and a driving force behind European integration. Yet after 16 years in power his reputation was tainted by links to slush funds and party donations. (02.04.2010)