How far have we come? Nuremberg Trials museum opens | Germany | News and in-depth reporting from Berlin and beyond | DW | 21.11.2010

Memorium, a new museum commemorating the Nuremberg Trials, opened this week. Speaking at Sunday's opening ceremony, a former US prosecutor called for the Nuremberg spirit to continue to be upheld today. 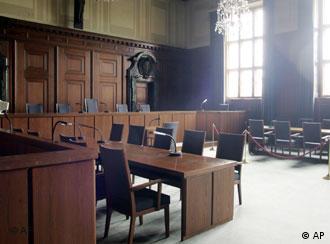 Courtroom 600 is still a functioning court

Sixty-five years after the opening of the Nuremberg trials, the courtroom that witnessed Nazi leaders being found guilty of war crimes has been transformed into a museum commemorating the momentous events which saw the eyes of the world fixed on this Bavarian city.

Benjamin Ferencz, a former US prosecutor in the war crimes trials, and one of the few people participants still alive to have taken part in the trials, returned to Nuremberg at the age of 90 to speak at the opening of the museum on the anniversary of the world's first war crimes trial.

Speaking at the inauguration of the new museum, Ferencz said, "When I left Germany for the first time after World War II and left Nuremberg, my biggest regret was that I never heard from any German saying 'I'm sorry.' I would never have believed that I would come back 60 years later and would hear a completely different voice and a different plan in the same country."

At just 27, Ferencz was the chief prosecutor at the trial of 22 Nazis in 1947, one of the 12 trials that followed the trial of the major war criminals. After graduating from Harvard law school in 1943 he immediately joined the US Army, gathering evidence of Nazi crimes as the Americans liberated the death camps Buchenwald, Mauthausen and Dachau.

Speaking in the courtroom in which he led the case for the prosecution in 1947, Ferencz said, "I've seen the crematoria with the bodies packed outside and the bodies burning inside ... I have seen the destruction of German cities, of French cities, of British cities ... I don't know if we will ever turn the page completely, people will always doubt whether it is possible for human beings to behave in such an inhumane way." 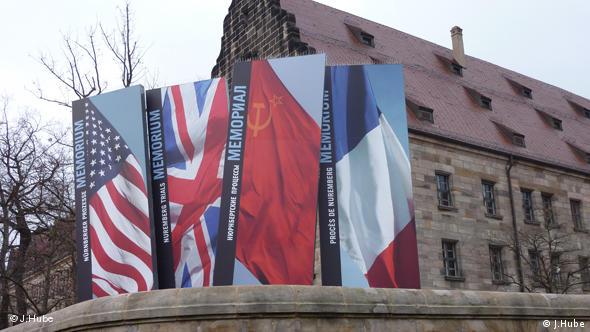 Allied flags decorate the exterior of the building

During the war, Soviet leader Joseph Stalin called for the mass executions of German soldiers and Nazi leaders to be carried out when victory was won. In contrast, Britain, France and the USA demanded that the Nazi perpetrators answer for their crimes in a front of a legal court. It was this insistence which led to the International Military Tribunal opening its first court session on November 20, 1945 in Courtroom 600 at the Palace of Justice in Nuremberg.

While Nazi leaders Adolf Hitler and Heinrich Himmler escaped justice by committing suicide at the end of the war, 21 other leading Nazis were put on trial in Nuremberg. Under the spotlight of the world's media, the city associated with fanatical Nazi rallies was reborn as the city which hosted the first ever war crimes trial. Named the 'trial of the century' by the media, it lasted 218 days before the accused were led to the dock to hear judgment on October 1, 1946. 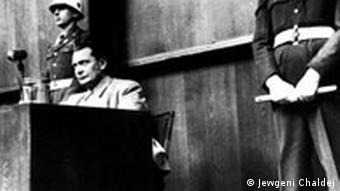 Goering committed suicide before his death sentence was carried out

Although Hermann Goering escaped his sentence by committing suicide shortly before he was due to be hanged, Foreign Minister Joachim von Ribbentrop and the Head of the Armed Forces, Wilhelm Keitel, were hanged in Nuremberg prison in October 1946 along with eight others.

The very dock in which Hermann Goering and other leading Nazis were sentenced to death is now part of the new Memorium exhibition housed in an attic area above Courtroom 600, which remains an active criminal court.

The inauguration of the museum, which was attended by the German and Russian foreign ministers as well as representatives of the United States, France and Great Britain, symbolizes the gradual end of Nazi war crimes being pursued in the courts, leaving the history books to judge those who may have escaped justice.

Earlier this month, Michael Seifert, known as the ‘Butcher of Bolzano,' died at the age of 86 in an Italian hospital after being extradited to Italy from Canada in 2008. He was serving a prison sentence for murdering 11 people at a prison camp in Bolzano. Seifert was one of the few Nazi war criminals still known to be alive. Few witnesses from the time remain, making it increasingly difficult for the courts to continue the work started in Nuremberg at the end of the war.

The ongoing trial of 90-year-old John Demjanjuk, accused of murdering 27,000 at the Sobidor death camp in Poland, may prove the last time a suspected Nazi war criminal is seen in the dock.

Precursor of the ICC

The Nuremberg Trials leave a legacy that extends beyond the Nazi period. At the outset of the trial in 1946, US Chief Prosecutor Robert H. Jackson proclaimed, "The wrongs which we seem to condemn and punish have been ... so devastating, that civilization cannot tolerate their being ignored, because it cannot survive their being repeated." 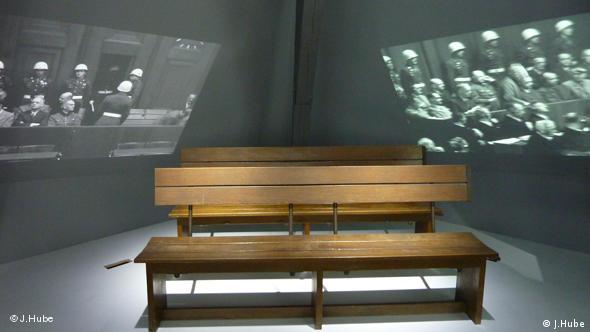 Two original courtroom benches, and old film images, are part of the exhibit.

Despite Jackson's words, Courthouse 600 was not the last court to hear allegations of war crimes. The Nuremberg Trials paved the way for the establishment of the International Criminal Court (ICC), as well as being the first court to establish the legal precedent of crimes against humanity.

In the late 1940s the court at Nuremberg was the target of much criticism. The trials were held in difficult circumstances, and some historians believe they would have been carried out differently with hindsight. Yet Nuremberg is still seen as a model, having established a theory of international law which holds that the perpetrators of such crimes be held to account for their actions.

Ferencz bore witness to this at the end of the war, and on Sunday used his speech as an opportunity to criticize those countries who, he says, are not giving their full support to the ICC, those whom he believes, have lost the spirit of Nuremberg.

"The object is not to punish people for crimes against humanity," he said. "The object is to prevent those crimes; by the time you are punishing you have failed." Quoting Judge Jackson, Ferencz argued that aggression is the supreme international crime, and the law must be applied equally to everyone. Looking down at the podium, the former chief prosecutor then asked the audience, "How far have we come?"

The museum exhibit is held in the attic above Courtroom 600, which remains an active criminal court. The courtroom will however be open to the public when not in use.

November 20 marks the 65th anniversary of the start of the Nuremberg trials, in which 22 prominent leaders of Nazi Germany were brought to justice by the International Military Tribunal. (20.11.2010)

Taking stock of grave crime: The ICC reviews its progress

Eight years after the Rome Statute came into force, signatory states are meeting in Uganda to discuss the effectiveness of the International Criminal Court (ICC) it called into being. (31.05.2010)