Stockhausen's "Helicopter String Quartet" stresses the parity of the sounds of helicopter rotors and string instruments. The rarely played piece was performed from 700 meters (2,300 feet) above ground this week. 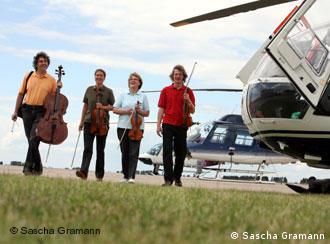 "When you're up above in the air, it is truly a feeling of euphoria," Denhoff told German news agency DPA. "You feel like you're part of a work of art."

The "Helicopter String Quartet" consists of four helicopters and as many musicians. The participants play from inside the hovering crafts. The combined sound of the instruments and the helicopters make up the piece, which is part of a 29-hour work called "Light Cycle."

The concert of rotors and strings was broadcast in a hangar from which the helicopters took off. Once the helicopters reached the altitude of 700 meters (2,300 feet) and were visible only as small specks in the sky, the hangar doors closed and the audience turned to the four large screens on which they could follow the individual musicians. 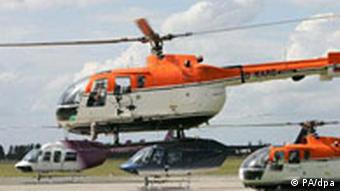 Parity between man and machine?

The Braunschweig performance was only the third successful one ever. The composer himself set the bar high as to what can be deemed acceptable performance: The helicopters must lift off three times within one day and have a new audience for each round.

All together, around 1,100 people watched the spectacle, according to the organizers.

"That was an extreme technical challenge," admitted sound engineer Olaf Mielke, adding that the performance had been almost perfect, save one minor hiccup.

The "Helicopter String Quartet" was previously played in Amsterdam, in 1995, and Salzburg, in 2003.

Stefan-Peter Greiner creates violins for some of the best musicians in the world. Deutsche Welle visited the violin-maker at his atelier in Bonn to learn how he makes a block of wood sing. (11.06.2007)

There's Music in the Air as Festival Season Begins

Germany's season of classical music unofficially begins this week with the Bach Festival in Leipzig and the Mozart Festival in Würzburg. World famous events like the Bayreuth and Beethoven Festivals round out the season. (07.06.2007)