Honoring the best of the Wurst of German Cuisine | News and current affairs from Germany and around the world | DW | 15.08.2009

Honoring the best of the Wurst of German Cuisine

The Currywurst, a German institution, finally has its own musuem in Berlin. Housed in spacious premises in the central Schuetzenstrasse, close to the former Checkpoint Charlie, the Currywurst Museum opens on August 15. 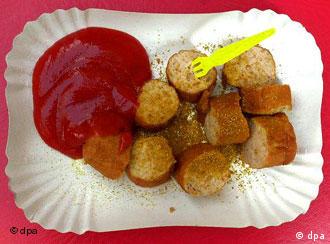 A German institution for over 60 years: the currywurst

First dreamed up 60 years ago, the currywurst has long been a part of everyday life in the German capital. Everywhere you go in Berlin you will find stalls serving the concoction of pork sausage, curry powder, and ketchup. Lots of ketchup.

"It's less a meal, more an institution in Berlin," bellows a red- faced policeman, as he munches a currywurst at a stall in front of the city's famous ruined Memorial Church.

More than 60 million of the sausages get prepared, devoured, spiced and served with pommes frites and rolls every year in Berlin at hundreds of different street corner stalls, snack bars and restaurants.

So much so, that now an enterprising sausage lover has decided it's time for the nation's first "Currywurst Museum."

Martin Loewer, its initiator and curator, has ploughed nearly five million euros ($7.1 million) into the project. He reckons it will attract up to 350,000 visitors every year.

Museum director Birgit Breloh is also enthusiastic, claiming the museum is a tribute to a phenomenon. "No other German national dish inspires such excitement as the currywurst," she enthuses.

The museum spotlights the history, origin and production of the currywurst, starting from the time sixty years ago when Herta Heuwer, a doughty Berliner, first began selling the sausage with a special sauce she'd invented, in the city's Charlottenburg district.

A special section of the museum is devoted to Heuwer. At the height of her activity in the early post-war years, she was selling more than 10,000 currywurst weekly at her stall.

Film stars, theatre personalities and numerous local politicians were among her clients in that troubled period, when Soviet forces encircled West Berlin and the allied airlift operation was in full swing.

Archive footage at the Museum shows Heuwer being interviewed on German television some 30 years ago when she was hailed as a "national heroine" by the audience, for introducing the dish to a grateful nation. 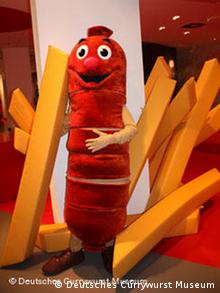 Not all the sausages on show are there to be eaten

Currywurst paraphernalia adorns the Museum exhibition walls, with rooms kitted out with sausage-shaped benches and other accoutrements.

No aspect of the currywurst "experience" gets overlooked.

The "Rubbish for the Future" section of the Museum even has kind things to say about the paper cartons on which the sausages get served, claiming that the production and recycling processes deployed make the sausage an "eco-friendly" side-stall snack.

Nostalgic keepsakes and souvenir items get offered for sale, including colored T-shirts emblazoned with the slogan "Don't worry - be Curry."

Elsewhere in the museum, display space is also allotted to the controversial claim that Hamburg, not Berlin, is the true home of the sausage.

In the 1990s, Uwe Timm, a German writer, claimed that the sausage was first sold in the harbor area of Hamburg after the war.

Not so, seems to be the answer of the Berlin museum promoters, who are backed up in their beliefs by Gerd Ruediger, a local currywurst expert, who insists the late Herta Heuwer was THE sausage pioneer - in "proletarian, working-class Berlin" in the post-war years.

A plethora of sausage types 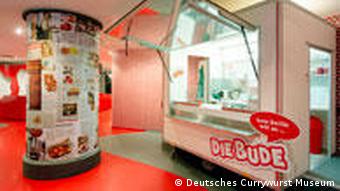 The museum shows every aspect of the currywurst cult

Sausage-wise, different traditions sprang up during Berlin's 40- years of post-war division. In the Communist east, Berliners tended to prefer their "Fettwurst" - a fatty sausage which, when pierced, was likely to emit small fountains of fat.

In the western half of the city, where the currywurst was prepared with or without skin - according to taste - customers often preferred it prepared crisp and lightly charred.

The currywurst has many fans, as the museum zealously confirms. When Gerhard Schroeder was Germany's chancellor a few years back, he would often be seen munching a chopped Currywurst brought from a stall near the Chancellery in the Tiergarten.

Walter Momper, who was Berlin's Social Democrat (SPD) mayor the night the Wall came down in 1989, and who today is president of the local city parliament, is another great Currywurst fan.

So too is ex-city mayor, Eberhard Diepgen. He claims his enthusiasm for the sausage dates back to the days when he was a student at Berlin's Free University in the 1960s.

The Currywurst Museum at 70 Schuetzenstrasse will open on a daily basis, from 10am to 10pm. Entrance charge, 7-11 euros.

The best-known snack stand in Berlin

She is without a doubt the most famous purveyor of takeaway food in Berlin. Even ex-Chancellor Gerhard Schroeder saw fit to eat at Waltraud Ziervogel’s fast-food stand. But she refuses to call herself famous. (05.02.2009)

Berlin Butchers Join Forces to Protect the "Home" of Currywurst

Wherever you go in Germany, you can get a currywurst. It tastes the same all over but comes with different frills depending on the region. However, some believe it should be officially recognized as a Berlin speciality. (20.11.2007)