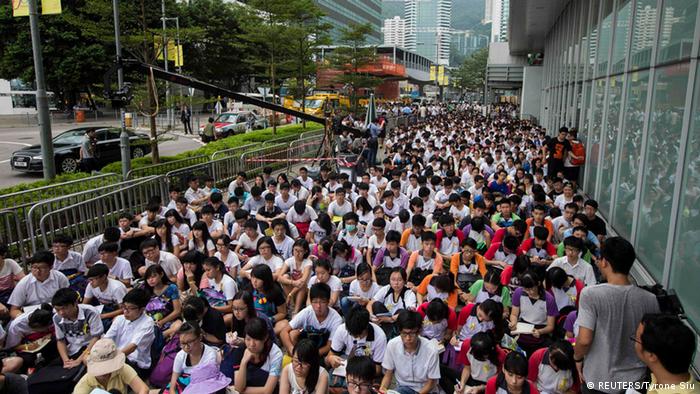 Last month, China's top legislative body, the National People's Congress, announced that a new "broadly representative committee," comprising roughly 1,200 people, would nominate candidates for Hong Kong's next chief executive in the 2017 election. The move was seen as a reversal of China's promise that the elections, the first since the 1997 handover, would be decided by universal suffrage.

Five days of demonstrations against the new law culminated on Friday with violence when some 100 participants attempted to storm the building, prompting police to respond with pepper spray.

Protest leader Joshua Wong, 17, was arrested by authorities soon after the incident.

"I want to tell [Hong Kong chief executive] C.Y. Leung and [Chinese President] Xi Jinping that the mission of fighting for universal suffrage does not rest upon the young people. It is everyone's responsibility," Wong told the crowd prior to his arrest, according to news agency Reuters.

Demonstrations kicked off on Monday with a student walk-out across Hong Kong's universities. On Thursday evening, some 200 protesters camped outside Chief Executive Leung's home, demanding he meet with them.

In recent months, a number of groups have staged protests in the financial hub, including a Occupy Central, which is planning a mass rally for October 1. In June, the activist group held an unofficial referendum on the election reform by Beijing. The vast majority of the 800,000 people who cast ballots said they wanted the public to nominate candidates for Hong Kong's chief executive, not a committee loyal to Beijing.

China calls for reunification with Taiwan

Public discontent with Beijing has also been on the rise in Taiwan, which has operated as a de facto sovereign state since 1949, when China's nationalist government resettled on the island after losing a civil war to the Communist Party.

On Friday, Chinese President Xi Jinping responded to increasing calls for full Taiwanese independence, saying that reunification would be beneficial for both nations. He advocates a "one country, two systems" model, which was put into place in Hong Kong after its return to China in 1997.

"The national reunification we advocate is not merely unification in form, but more importantly, a spiritual connection between the two sides," Xi told representatives from pro-reunification groups from Taiwan, according to Chinese state media.

However, Taiwanese premier Jiang Yi-huah reportedly rejected the offer during a legislative meeting on Friday.

"The Republic of China has never accepted the 'one country, two systems offer," dpa quoted Jiang as saying, underscoring the fear that the current erosion of freedom in Hong Kong would also occur in Taiwan if it submitted to Beijing.