A memorial train featuring an exhibition on the thousands of children deported and murdered by the Nazis during World War II completed its journey near the former Auschwitz death camp in southern Poland. 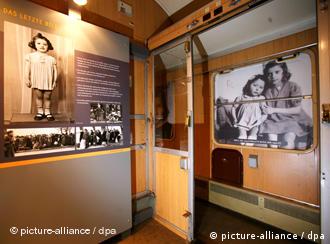 More than 200,000 people saw the memorial train exhibition since November

Some 200 people marched on Thursday from the railway station in Oswiecim, where the train arrived, to a platform at the nearby Auschwitz camp, where more than 1.1 million people, including one million European Jews, were killed there between 1941-45.

"It's not easy to confront ourselves because we are not the victims but we are the sons and daughters of the perpetrators," organizer Hans Minow said.

"We say this knowing that perhaps our fathers and mothers -- if not participated -- did not do what they had to do when the crimes started," he said.

The train's arrival at Auschwitz coincided with the 63rd anniversary of the end of the Second World War in Europe on May 8, 1945.

The exhibit, which originated in the western German city of Frankfurt in November, provoked controversy after the state-owned rail operator Deutsche Bahn refused permission for the train to stop in Berlin's gleaming new Hauptbahnhof central station.

Deutsche Bahn said at the time that this would have caused major disruption to normal services. The exhibition took place instead at Ostbahnhof, the main train station of the former East Berlin.

The Train of Commemoration Foundation also complained that, despite Deutsche Bahn's historic involvement in the transportation of prisoners to Nazi death camps, the company had invoiced the foundation for rail-track use.

After the foundation threatened to publicly shame the company, Deutsche Bahn admitted that it was charging the group the same toll for track use as it charged other private train operators. A Bahn spokesman said the company had to treat all customers equally and that no one could use the tracks for free.

Organizers said that more than 225,000 people viewed the exhibition during its six-month voyage.

Detailing the fate of Jewish children and teenagers deported by the Nazis between October 1940 to December 1944, the "Memorial Train" focuses on the biographies of several such children.

The organizers created an exhibit that symbolically travelled through the country on the very railways that were used in the deportations after hearing of a 2003 French exhibition organized by French Nazi hunters and activists Beate and Serge Klarsfeld.

The initiative was also intended to encourage visitors to search for traces of Jewish people who had vanished from their towns or region during the war.

An exhibition on the deportation of Jewish children to Nazi death camps has opened in a Berlin train station. Germany's rail company had initially rejected the idea, but bowed to pressure from the transport minister. (24.01.2008)