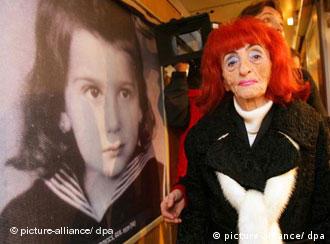 The Train of Commemoration, a mobile memorial to Holocaust victims, has been passing through train stations in Germany since early November. It is set to arrive in the German capital on Sunday, April 13, for a 10-day stay at five stations. But Deutsche Bahn has dubbed the central station off-limits for the privately organized exhibit, citing heavy traffic.

Organizers have rejected the smaller stations that Deutsche Bahn offered as an alternative.

In a statement issued on Monday, April 7, the International Auschwitz Committee said it was "angered" by Deutsche Bahn's decision: "Both the financial conditions and the barring of important train stations for the Train of Commemoration are incomprehensible and unacceptable." 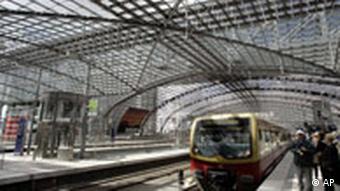 Berlin's central station opened in May 2006

An ongoing conflict over what the organization is to pay Deutsche Bahn for the use of exhibition space at stations throughout Germany remains unresolved, though fees are estimated to total between 70,000 and 100,000 euros ($110,000 to $157,000).

Berlin Mayor Klaus Wowereit urged Deutsche Bahn to find an appropriate place in the central station for the exhibit.

"The Holocaust was thought out and planned in the German capital," said Wowereit in a statement published on the Train of Commemoration Web site. "Berlin's Jews were systematically brought by the Nazis to death camps -- and by train.

Especially in Berlin, it must be possible for a commendable memorial project like the Train of Commemoration to receive every kind of support in our city."

Project organizers have planned protest on Saturday at the Brandenburg Gate in central Berlin, followed by a silent march to the nearby Deutsche Bahn headquarters.

According to Die Welt newspaper, authorities are examining the legitimacy of the train company's decision. 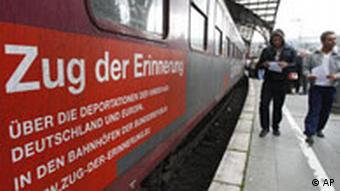 A Deutsche Bahn spokesman responded that "such statements are made without regard for our many years of active commemoration work. DB's many initiatives demonstrate just the opposite."

Train to end tour at Auschwitz

The exhibit, which focuses on the plight of deported children, displays photos and film excerpts of survivors who describe their deportation experience. After Berlin, the Train of Commemoration is set to continue on to six other German cities before crossing over into Poland.

On May 8, the anniversary of the end of the war in Germany, the exhibit will arrive in Auschwitz, one of the Nazis' most deadly concentration camps.

Organizers of a rolling exhibit that highlights the role of the German transport system in the Holocaust have complained of a lack of support from Germany's largest national railway company. (07.01.2008)

Which side do you take in the conflict over the Train of Commemoration exhibit? Please include your name and country in your reply.