For the first time in decades, the people of Myanmar were allowed to freely express their political will. Voters are now expecting a new beginning, but that will prove difficult. Rodion Ebbinghausen reports from Rangoon. 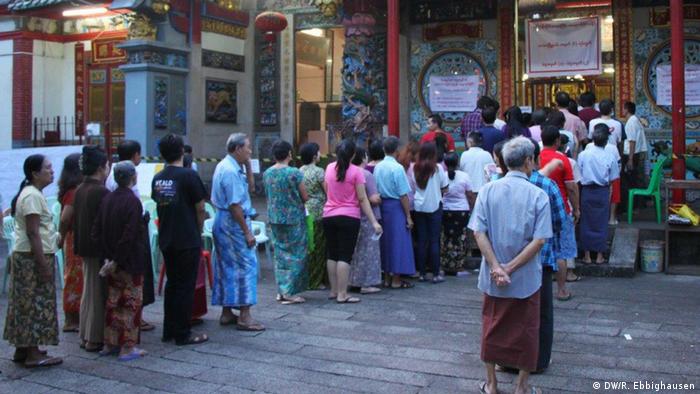 The polling station on Anawrahta Road in Yangon's Chinatown district opened right on time at 6:00 a.m. Almost fifty voters had already been waiting, and they applauded when the gates opened. More and more people arrived in the courtyard. A few of them held up their pink-colored ID and voter registration cards. They patiently waited for their turn. Everything seemed well-organized and ran smoothly.

The 30 million eligible voters in Myanmar voted for a new parliament on November 8, 2015, although only three quarters of the seats were up for grabs. The other quarter was reserved for the military. This means that no matter the outcome of the elections, the military will have the power of the last word on all legislative changes.

Nonetheless, the elections were still important as the people voted for the first time in 25 years. Election results will reveal whether voters want further reform measures. And the elections will also show the extent to which the political elite respects the will of the electorate.

The most important parties, the ruling Union Solidarity and Development Party (USDP) and The National League for Democracy (NLD) headed by Aung San Suu Kyi, plus 90 other parties ran for political office. Many people expect a clear NLD victory, but since no opinion polls have been conducted, observers warn against premature forecasts.

Starting 9:00 a.m. local time on Monday, November 9, election results will be published and updated on an hourly basis, says the election commission. Election turnout was estimated at 80 percent, according to the announcement made by the deputy director of the election commission a few minutes after polling stations were closed.

Election workers diligently prepared the elections. The day before the elections, they hung up the register of voters in front of the election offices, and they set up green tables and plastic chairs. The workers in the polling station on Anawrahta Road even rehearsed the election process.

The head of the election office willingly provided Deutsche Welle with information. He said that there were errors on the register of voters but 98 percent of the list was correct. Obvious typos in names or accidental digit swaps in ID numbers did not mean that voters would be automatically disqualified, asserted the elderly gentleman in the white shirt and longyi, the traditional Burmese sarong. No one could really tell how often these errors came up, as access to the election room was restricted for the press. 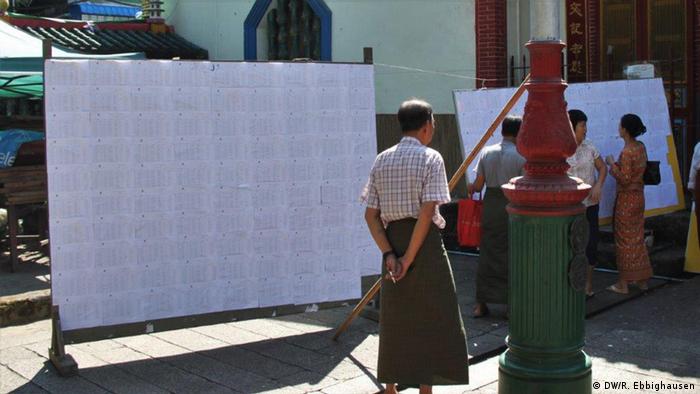 Katrin Bannach, a project manager for the Friedrich Naumann Foundation for Freedom in Yangon, was in Hpa-An, the capital of Karen State. She spoke to Deutsche Welle about the elections.

"People with proud expressions on their faces are coming to the polling stations," Bannach said. "The atmosphere is generally relaxed."

Prior to the elections, Bannach coordinated extensive election training courses for almost 200,000 people. She maintains that work with the election commission and the government was generally positive. It was obvious that everyone was willing to do their best to hold free and fair elections, she said.

But in some regions, the courses also proved to be somewhat problematic.

"A lot depends on those responsible in the region," Bannach admitted. "Some people are just more open and liberal."

The extent of the freedom and fairness of the elections will be analyzed by an experienced EU team under the direction of Alexander Graf Lambsdorff, Vice-President of the European Parliament. Lambsdorff's European team faces a great challenge, as deep-rooted distrust of politics prevails in the southern Asian country –a result of decades of military rule and civil wars.

After polling stations closed, turnout for the historic vote was reported at 80 percent. The election result is expected to be a major boost for Aung San Suu Kyi's pro-democracy party. (08.11.2015)

The distrust was slightly overcome after the opening process was initiated in 2012. As in the past, ethnic minorities still do not trust the central government, politicians in the opposition do not trust the military and the military does not believe that the country's politicians are capable of keeping the country together. The interests of the so-called "cronies," who have become prosperous and influential under military rule, have always played a role in politics, even though they seldom appear in public.

The European monitoring mission strives to "increase public trust in elections" - if they are truly free and fair. In order to tackle this Herculean task, the mission has built a team of 150 people. They are represented in all parts of the country - in cities and in rural regions.

"The monitoring mission on election day is very technical," Graf Lambsdorff explained in Aung San Suu Kyi's constituency. "Are the ballot boxes here? Are they empty and sealed? What about the voter lists? The most important thing is that people can cast their ballots in secrecy, without any outer influences or distractions."

Graf Lambsdorff has asked people to be patient. It will be a while until judgement can be passed on the freedom and fairness of the elections. First of all, information from the entire country must be collected. A preliminary stock-taking will be possible two days after the elections. Two months later, a final report with recommendations for the next elections will follow. 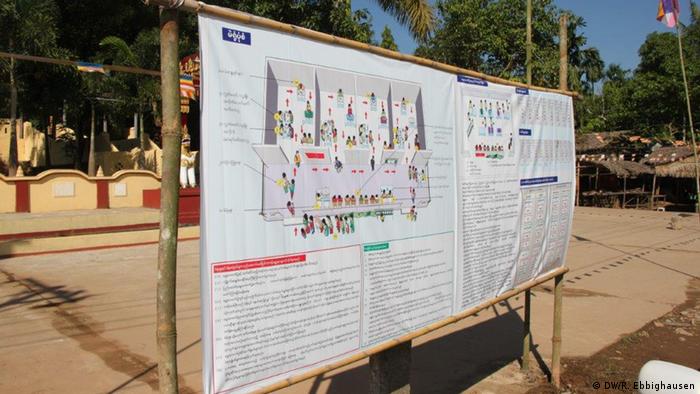 Everywhere in the country, residents had access to election information posters

Voters have great expectations. Ahead of the elections, one woman in Myanmar told Deutsche Welle, "On Sunday, we will see justice for 1990." Back then, the NLD emerged as the winner of the elections, but the military refused to hand over power. A young female voter just left the polling station. "I am proud," she said. Another young voter said he felt free.

Bannach exercises caution when she speaks of the lack of experience in elections and the naïve enthusiasm of some people.

"Most people here have never seen elections," Bannach told DW. "Many just have a vague idea of what will happen afterward. Quite a few people believe that everything will suddenly be better."

"Creating new jobs, raising living standards and improving the education system are tedious tasks," she added. "I foresee many disappointments. The winner of the election faces great challenges."

He or she won't have to face these challenges immediately. The handover of power will probably take place in March or April 2016.